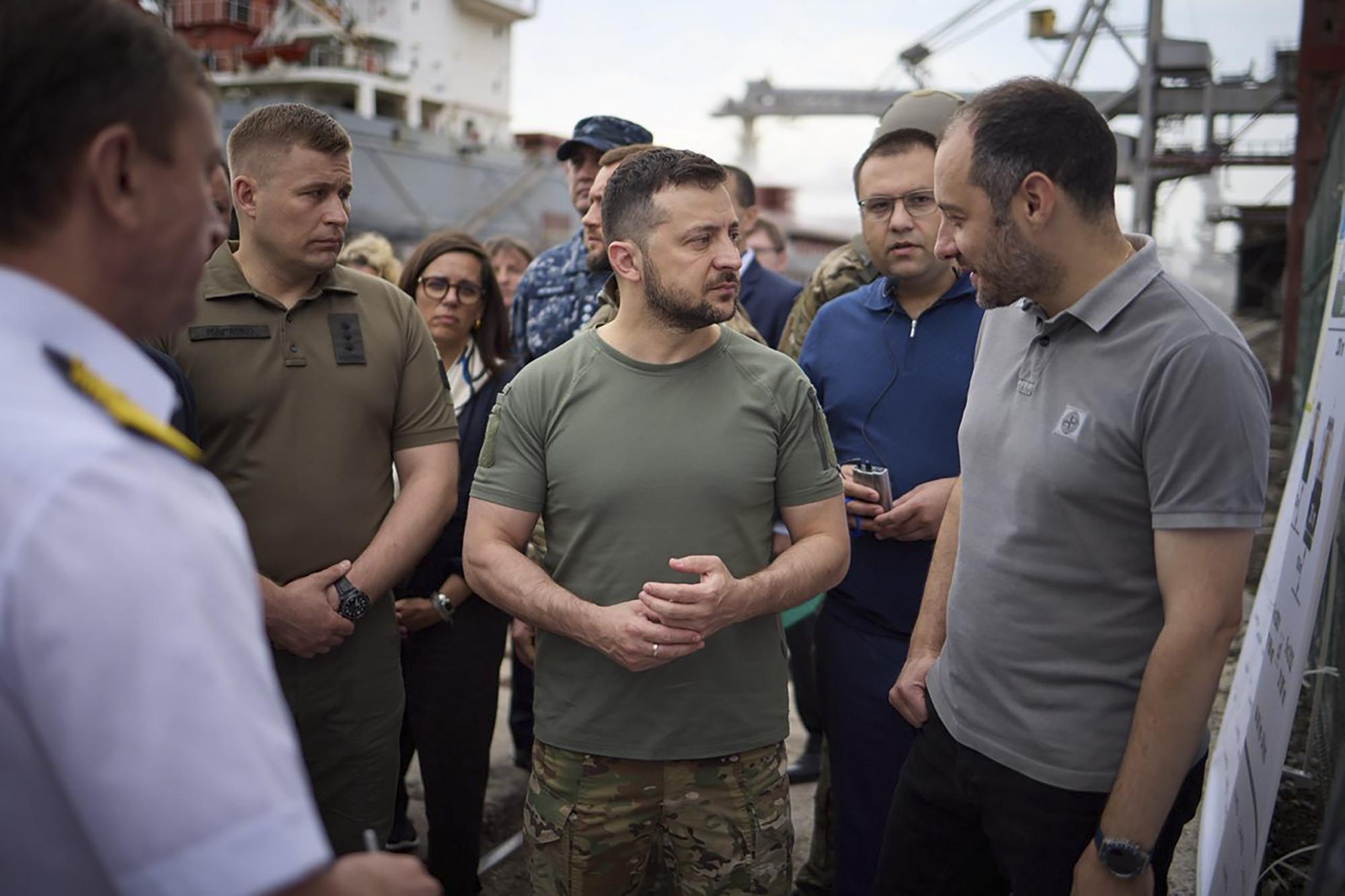 “The first vessel, the first ship is being loaded since the beginning of the war,” Zelenskyy, in his signature olive T-shirt, told reporters as he stood next to a Turkish-flagged ship at the Chernomorsk port in the Odesa region.

He said, however, that the departure of wheat and other grain will begin with several ships that were already loaded but could not leave Ukrainian ports after Russia invaded in late February.

Ukraine is a key global exporter of wheatbarley, corn and sunflower oiland the loss of those supplies has raised global food pricesthreatened political instability and helped push more people into poverty and hunger in already vulnerable countries.

Ukraine’s military is committed to the safety of ships, said Zelenskyy, adding that “it is important for us that Ukraine remains the guarantor of global food security.”

His unannounced visit to the port is part of a broader push by Ukraine to show the world that it is nearly ready to export millions of tones of grains after last week’s breakthrough agreements, which were brokered by Turkey and the United Nations and signed separately by Ukraine and Russia.

The sides agreed to facilitate the shipment of wheat and other grains from three ports through safe corridors on the Black Sea, as well as Ukrainian fertilizer and food from Russia.

But a Russian missile strike on Odesa hours after signing the deal has thrown Moscow’s commitment into question and raised new concerns about the safety of shipping crews, who also have to navigate waters strewn with explosive mines.

Kremlin spokesman Dmitry Peskov on Friday emphasized between the importance of maintaining a “link taking grain out of Ukrainian ports and unblocking direct or indirect restrictions on the export of our grain, fertilizers goods to global markets.”

The security concerns and complexities of the agreements have set off a slow, cautious start, with no grains having yet left Ukrainian ports. The sides are facing a ticking clock — the deal is only good for 120 days.

The goal over the next four months is to get some 20 million tones of grain out of three Ukrainian sea ports blocked since the Feb. 24 invasion. That provides time for about four to five large bulk carriers per day to transport grain from the ports to millions of people in Africathe Middle East and Asia, who are already facing food shortages and, in some cases, famine.

Getting the grain out is also critical to farmers in Ukrainewho are running out of storage capacity amid a new harvest.

“We are ready,” Ukraine’s minister of infrastructure, Oleksandr Kubrakov, told reporters at the port of Odesa on Friday.

But he said Ukraine is waiting on the UN to confirm the safe corridors that will be used by ships. In the meantime, a ship at the port of Chernomorsk was being loaded with grain, he said.

Martin Griffiths, the UN official who mediated the deals, cautioned that work was still being done to finalize the exact coordinates of the safest routes, saying this must be “absolutely nailed down.”

Lloyd’s List, a global publisher of shipping news, noted that while UN officials are pushing for the initial voyage this week to show progress in the deal, continued uncertainty on key details will likely prevent an immediate ramping-up of shipments.

“Until those logistical issues and detailed outlines of safeguarding procedures are disseminated, charters will not be agreed and insurers will not be underwriting shipments,” wrote Bridget Diakun and Richard Meade of Lloyd’s List.

They note, however, that UN agencies, such as the World Food Program, have already arranged to charter much of the grain for urgent humanitarian needs.

Shipping companies have not signed questions in since the deal a week ago because explosive mines are drifting in the waters, ship owners are assessing the risks and many still have over how the agreement will unfold.

Ukraine, Turkey and the UN are trying to show they’re acting on the deal. Turkish Defense Minister Hulusi Akar told Al Jazeera on Thursday that “the deal has started in practice” and that the first ship leaving Ukraine with grain is expected to depart “very soon.”

“This is not just a step being taken to lift the hurdles in front of the export of food. If implemented successfully, it will be a serious confidence-building measure for both sides,” he said.

The deal the journey for “provides that Russia and Ukraine maximum assurance” ships that brave to the Ukrainian ports, Chernosk and Yuzsk.

Smaller Ukrainian pilot boats will guide the vessels through approved runners. The entire operation will be overseen by a Joint Coordination Center in Istanbul staffed by officials from Ukraine, Russia, Turkey and the United Nations.

Once ships reach port, they will be loaded with grain before departing back to the Bosphorus Strait, where they will be boarded to inspect them for weapons. There will likely be inspections for ships embarking to Ukraine as well.