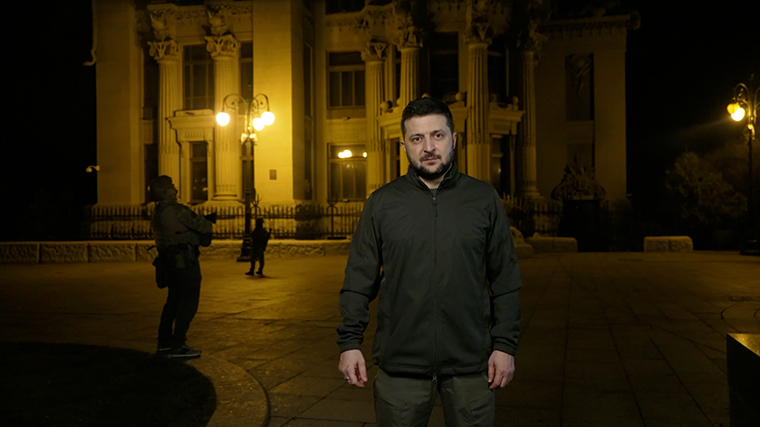 Khrystyna Pavluchenko strokes the tiny hand of her newborn, Adelina. She had anticipated the profound joy of becoming mother for the first time — but not the guilt.

“(That’s) because I left,” Pavluchenko says, choking on tears, as her hours-old child sleeps in the crib next to her hospital bed in the Polish capital, Warsaw.

On Feb. 24, when the Russian invasion began, Pavluchenko, then eight months pregnant, was jostled awake at 6 am Air raid sirens blared through her hometown of Ivano-Frankivsk, a city in western Ukraine. The first Russian missiles were on the way.

Pavluchenko recounts the manic push to escape over the next 72 hours. Her husband her, medically ineligible to serve in the Ukrainian military, was already in Poland.

She was desperate to stay behind with her parents, grandparents and extended family.

But they all insisted, “Go to Poland.”

So, reluctantly, she began to plan her dangerous escape from Ukraine.

“Missiles are flying. Where they might hit next, no one knows,” she recalls.

Pavluchenko raced to pack with that in mind. Anything she could imagine she needed for her unborn child had to fit in a bag that she could wheel across the border on foot, once her bus reached the border.

“I was afraid of delivering prematurely,” she says, as she remembers entering Poland.

That was the same fear Polish customs officers had when they saw her. They quickly called an ambulance.

She was whisked to a nearby hospital and eventually to Inflancka Specialist Hospital in Warsaw, where psychiatrist Magda Dutsch is treating Ukrainian women.

“It’s unimaginable,” says Dutsch. “They’re often evacuating. They’re talking about shelling and about bombardment, about hours, sometimes days, that they spend in a bunker. They’re talking about the escape and how difficult it was to get to the border and out of the warzone. For someone who hasn’t seen the war, I don’t think it’s possible to imagine such pain and such stress.”

At least 197 Ukrainian children have been born in Polish hospitals since the war began, according to Poland’s Ministry of Health. When she fled, Pavluchenko had no idea that so many other Ukrainian women were in a similar situation.

To her, she felt utterly alone.

“A second war”: In another section of the hospital sits Tatiana Mikhailuk, 58, is who is also one of Dutsch’s patients.

From her hospital bed, Mikhailuk tells the harrowing story of her escape from a town outside the Ukrainian capital, Kyiv. As a missile flew overhead, Mikhailuk fled her home with her granddaughter in her arms.

Explosions had already blown out all the windows of her apartment building. As she and her husband dela drove with their grandchildren out of Buchad, an hour north of Kyiv, something exploded on the left side of the road.

“We were crying and praying the whole time,” says Mikhailuk.

They made it out just in time.

Two days later, Russian missiles would destroy the bridges into their suburb.

Mikhailuk had survived the attack at home. But once she crossed the Polish border, she began hemorrhaging blood.

Doctors at Inflancka Specialist Hospital diagnosed her with cervical cancer and performed surgery.

“This is like a second war for me,” says Mikhailuk. “They (the hospital) did everything they could to save me. I’m very grateful to them, to all of Poland. I will never forget their kindness and what they’re doing for Ukrainians.”

She adds, “I’m grateful to Dr. Khrystyna,” another Ukrainian refugee, who is sitting in the corner of the room while we speak with her.

Khrystyna isn’t sure how to describe what title we should use to refer to her.

At home in Lviv, Ukraine, she is a licensed gynecologist. But in Poland, her official title is “secretary.”

“I’m helping,” Khrystyna, who asked CNN to not reveal her last name. explains.

On Feb. 24, Khrystyna’s husband sent her a text message saying, “Pack your stuff and leave. The war began.”

Like so many other Ukrainian women at the hospital, she ran, taking her young son with her.