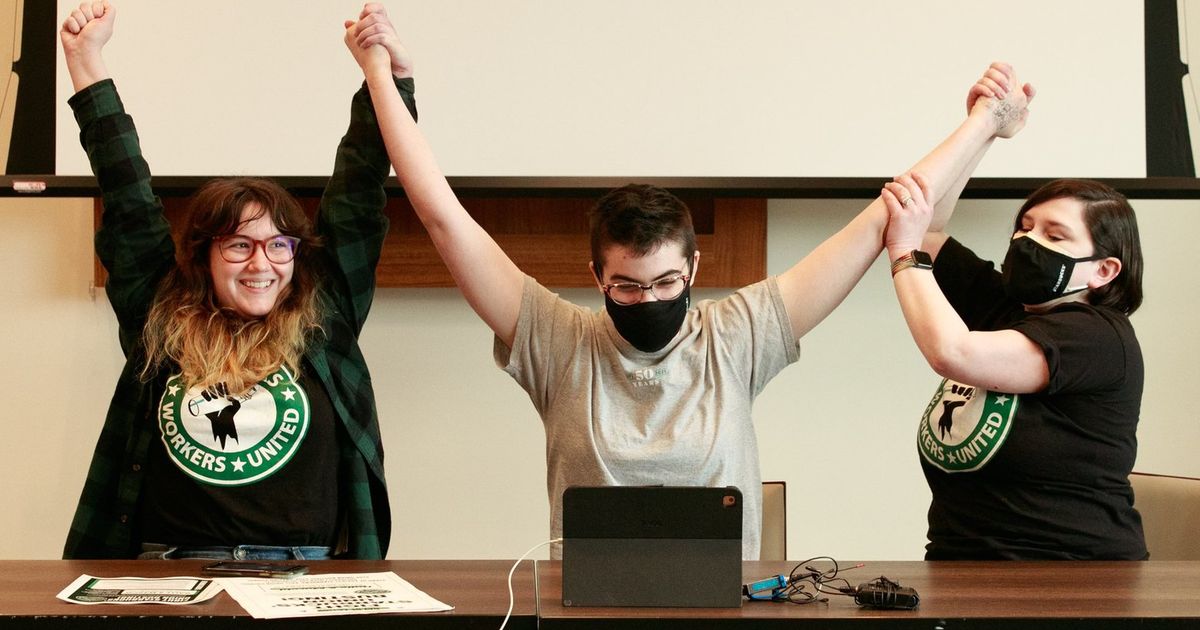 A mile away from the flagship location where Starbucks launched in Seattle 50 years ago, a small group of local Starbucks employees huddled around an iPad under the bright lights of a hotel conference room and watched as they became the only unionized company-owned store in town .

“Unanimous!” they shouted, hands clasped in the air.

The vote, which the National Labor Relations Board announced Tuesday, is an especially win in the coffee giant’s hometown as Howard Schultz returns as interim chief executive officer and workers at more than 100 stores say they want to unionize.

The store at Broadway and East Denny Way in the Capitol Hill neighborhood will become the seventh in the country where employees have voted in favor of unionizing with Workers United, an affiliate of the Service Employees International Union.

Employees at five stores in Buffalo, New York, and one in Mesa, Arizona, have voted yes. One store in Buffalo voted against unionization. Employees at six other Seattle locations have said they plan to unionize.

Of the 13 employees at the store eligible to vote, nine voted in favor, one ballot was challenged and none voted against, according to the NLRB.

Workers at the Capitol Hill location said they were organizing because they wanted improvements to healthcare coverage and more input in company policies, and because they saw unionizing as a “fundamental and necessary way to participate in Starbucks and its future as partners.”

Next, the workers will negotiate with the company for a first contract.

Starbucks has opposed unionization. In a statement Tuesday, a company spokesperson said, “We will respect the process and will bargain in good faith. … We hope that the union does the same.”

Throughout the national campaign, the union has accused Starbucks of retaliating against workers. The company has denied the allegations. Last week, the NLRB issued a complaint alleging that Starbucks wrongly disciplined two pro-union workers in Phoenix.

The workers who organized the Capitol Hill store see their win as sending a broader message. Food service work is notoriously difficult to unionize, in part because of high turnover among workers, and the jobs are among those with the lowest unionization rates.

Just 1.2% of employees in “food services and drinking places” are members of unions, according to the Bureau of Labor Statistics.

“In the past, maybe these were very transient jobs people only stayed in for a few years, but increasingly they are becoming people’s sources of income and livelihood,” said Sydney Durkin, a shift supervisor at the Capitol Hill store. “People in these positions are saying, ‘OK. This is what I’m doing. This has to be better than it currently is.’”

“This is a signal for the larger food industry that it is changing and it is building toward something hopefully more sustainable,” Durkin said.

“We want to kick down the door in the entire food service industry,” said Sarah Pappin, who works at another Starbucks location in Seattle seeking to unionize. Workers sometimes struggle to get enough hours to make ends meet, Pappin said.

But expanding the Starbucks effort into a larger transformation of the food service industry will be a tough prospect.

Private-sector union membership across the country remains at just 6%, and federal efforts to make it easier to form a union are stalled. The number of stores where Starbucks employees say they want to unionize is for now a small fraction of the company’s 9,000 corporate-owned stores.

“It’s hard to be optimistic about this turning labor movement around,” said Ruth Milkman, a professor of sociology and labor studies at the City University of New York. “But it’s interesting in its own right as an expression of the dilemmas facing young, college-educated workers.”

Growing interest in unions among young people is part of a broader trend of activism among young workers, often those with college education, Milkman said.

Enthusiasm doesn’t always translate to union representation but can secure other changes. When fast food workers began the “Fight for 15” demanding $15 an hour and a union, they won a series of increases to the minimum wage, but the industry remains almost entirely non-unionized.

“That hasn’t changed union density but was successful on other fronts,” Milkman said.

Workers at some licensed Starbucks locations in airports and grocery stores are already unionized. And in the 1980s, workers at Starbucks’ Seattle stores and roasting plant joined the United Food and Commercial Workers Union.

“The effort for Howard Schultz to buy Starbucks was already rumbling and the thing about being an employee without a union is you don’t really have any sort of agency or control over your destiny,” Belov said.

By Schultz’s account in his book “Pour Your Heart Into It,” distracted managers had made employees “feel neglected” before the unionization vote. But he was clear in his opposition to him. “I was convinced that under my leadership, employees would come to realize that I would listen to their concerns. If they had faith in me and my motives, they wouldn’t need a union,” he wrote.

Eventually, an employee led an effort to decertify the union, according to Schultz, and by the mid-90s, neither store employees or roastery workers were unionized.

Like those workers in the 1980s, the challenge for the employees on Capitol Hill will now be bargaining a contract with the company — a process that can drag on for months.

“The union has to show up at the bargaining table, sit down and negotiate a deal that works for both sides,” said Dan Swedlow, who has worked on both sides of labor law and is now a management-side attorney at Summit Law Group . “The organizer got everybody fired up and now they need to settle back down, to come back to reality so they can negotiate a contract that everyone can live with.”

“There are going to be a lot of challenges. Starbucks has an unfathomable amount of money,” said barista Rachel Ybarra, “But we also have the desperation, the fury and the hope of every single Starbucks worker.”

As Belov remembers it, workers in the 1980s won a modest pay raise and improvements to sick time and healthcare in their first contract.

Today, Starbucks often touts its wages and benefits such as healthcare coverage, parental leave and tuition coverage for Arizona State University’s online programs. But a new generation of workers is likely to make a push that echoes the fight in the ’80s.

Workers are likely to call for a pay increase, allowing customers to leave tips on credit card orders, more consistent staffing and “more affordable healthcare that isn’t based on hours worked,” Durkin said. Today, employees have to average about 20 hours per week to be eligible for healthcare benefits.

Even with Starbucks’ comparatively higher pay, workers say they struggle to cover rising costs of living in Seattle.

“I have a management position. I make $25 an hour. That should be enough,” Durkin said. “But in the city of Seattle, it’s just simply not.”