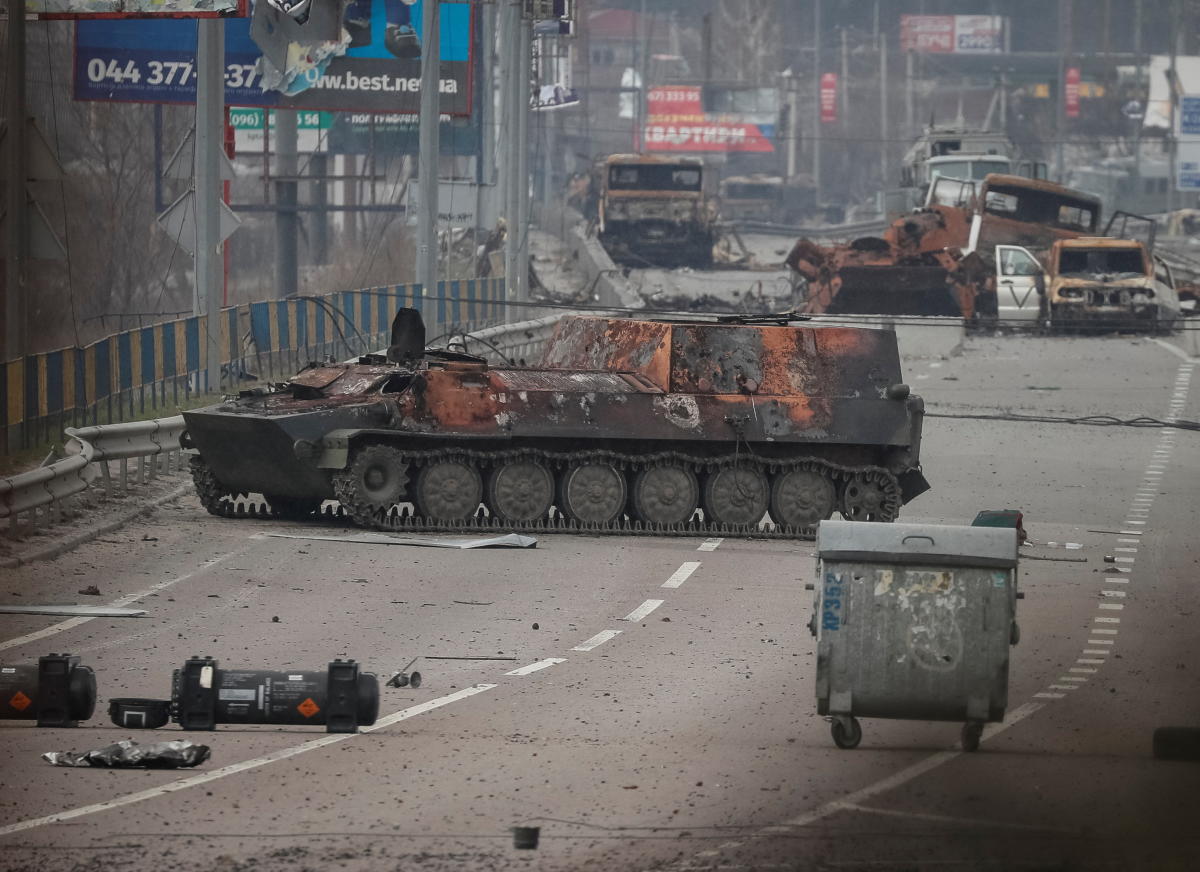 In 2015, naval observers noticed that Russia had purchased and refurbished a small fleet of dilapidated cargo ships barely suitable for scrap. Russia lacked modern supply vessels and needed the creaky ships to transport weapons and supplies to Russian troops fighting in Syria on behalf of President Bashar al-Assad.

In 2018, Russia’s largest floating repair dock sank near Murmansk, in northern Russia, damaging Russia’s only aircraft carrier, the Admiral Kuznetsov. Officials blamed a power outage. In 2019, 14 Russian sailors died in a fire on a mysterious submarine operating off the coast of Norway. Five months after that, the cursed Kuznetsov, still in Murmansk, suffered a fire that killed at least one, injured many others and left the ship damaged.

Superpower’s navy is supposed to project force around the world and demonstrate fearsome combat capabilities. Russia’s navy, during the last few years, has been showcasing something else: cracks in Russia’s military that stem from an unproductive economy, widespread corruption and the obstinacy of autocracy under President Vladimir Putin.

Those flaws are now on display for all the world to see in Ukraine, which Russia invaded on Feb. 24, clearly with the aim of rapidly deposing the elected government and installing a puppet regime. Much has gone wrong. Russian missiles and artillery fired from long distances have wrecked many undefended areas and killed hundreds of civilians, but Russia’s territorial gains have been minimal and its losses great. At least 10,000 Russian troops have died, approaching the death toll Russia suffered in Afghanistan during an entire decade in the 1980s. Ukraine’s military has destroyed hundreds of Russian tanks, trucks and other military vehicles, and dozens of aircraft and helicopters. The Russian effort to take Kyiv, Ukraine’s capital, completely founded and those troops have largely withdrawn.

More stunning than numerical losses may be widespread evidence of incompetence and hollowness. Russian vehicles break down due to dry-rotted tires and poor maintenance. Units have abandoned dozens of multimillion-dollar tanks for lack of gas. Russia seems to lack modern logistical tools such as cranes, pallets and fork lifts, crucial for moving material quickly and safely under stress, including combat. Camouflage efforts are primitive. Russian troops communicate over open radios, susceptible to interception, and loot Ukrainian homes and stores for basics such as food. One unit of panicked Russian troops appears to have turned on its own leader, running him over with a tank. The top British intelligence official said Russia’s “command and control is in chaos.”

The cancer of corruption and inefficiency

What happened? Western analysts obviously failed to notice many fundamental problems with Russia’s military, with many estimating before the invasion that overwhelming firepower and a deep kit of military tools would help Russia steamroll Ukraine. They had reason to believe that, however. For the last decade, Russia has increased defense spending and embarked on an aggressive modernization program, funded by profitable sales of oil, natural gas and other valuable minerals. The 2014 annexation of Ukraine’s Crimea region encountered little resistance and went smoothly, from a military perspective.

One thing that’s extremely difficult to diagnose from a distance, though, is the cancer of corruption and inefficiency. Russia has adopted some market reforms since the Soviet Union collapsed in 1991, but it has also become a kleptocracy with endemic graft and plodding state agencies that make America’s federal bureaucracy look like a whiz-bang startup. In Ukraine, those shortcomings may have metastasized into disaster.

“Corruption is part of the political and economic system in Russia, and what we are seeing in Ukraine is part of the explanation,” Katarzyna Zysk, a professor at the Norwegian Institute for Defense Studies in Oslo, tells Yahoo Finance. “The problem is there’s no accountability. We assume this continues to be part of the problem in the Russian military.”

Russia’s annual defense budget is around $62 billion—less than one-tenth what the United States spends. Even then, secret bidding for military contracts and an overcomplicated military bureaucracy leave ample room for graft. In a couple of rare admissions, Russian military leaders have estimated that 20% to 40% of Russia’s military budget is stolen. Former Russian foreign minister Andrei Kozyrev, who now lives in the United States, said on Twitter on March 6, “the Kremlin spent the last 20 years trying to modernize its military. Much of that budget was stolen and spent on mega-yachts in Cyprus.”

Some analysts have been aware of the holes in Russia’s military, even if it wasn’t yet evident on a battlefield. In a 2020 analysis for the University of Oxford, Zysk identified a slew of Russian military vulnerabilities: overlapping weapons programs that sap resources, logistical shortfalls, a weak drone program with limited attack capability, shipbuilding hindered by sanctions imposed after the 2014 invasion of Crimea, radar and satellite shortcomings, young people who want to leave the country en masse, poorly trained draftees, and more.

Putin personally favors Russia’s submarine force, which might explain why the navy gets 26% of Russia’s military funding, with just 14% going to the ground forces that account for the majority of the Russian military. But the main problems behind Russia’s military woes, the Oxford paper concluded, are “pervasive corruption, low labor productivity, brain drain, the inability to acquire a large blue-water navy and, limited innovation.”

Putin himself is responsible for those problems. As Russia’s leader or de facto leader for 22 years, he has fashioned the entire economy according to his liking, and probably purloined more of the nation’s wealth for himself than anyone else.

“Putin is the corrupter-in-chief,” Barry Pavel, director of the Scowcroft Center for Strategy and Security at the Atlantic Council, tells Yahoo Finance. “In autocratic systems like Russia, China or North Korea, it’s much easier to skim a lot of money off the top. The same thing is happening in the military. Each branch of the military gets a certain budget, and it seems to me there are chunks off the top that go for the aggrandizement of those leaders.”

Dude, I stole your army

US intelligence officials have deduced that Putin’s deputies are reluctant or afraid to tell him the truth about Russia’s shoddy military and its halting war in Ukraine. That might be because those are the same people who plundered the military budget in the first place, leaving poorly equipped troops to deal with the deadly consequences on foreign turf against a determined defender. Nobody wants to tell Putin, dude, I stole your army.

America shouldn’t gloat. The US military is clearly more competent than Russia’s, with better accountability, superior integration and a highly professionalized officer and enlisted corps. But there’s still plenty of waste, fraud and abuse in the US military budget, plus the infamous military-industrial complex that sometimes prioritizes profits and campaign donations over national security. America’s two-decade mission in Afghanistan ended with an ignominious withdrawal last year, followed by the immediate collapse of the US-backed Afghan government.

Russia does have an effective submarine force, advanced missile technology and, of course, a vast nuclear arsenal. So it would be a mistake to assume Russia’s sloppy performance in Ukraine means it would roll over in a broader conflict with NATO or any other power.

“After 2014, when Russia took over Crimea, we exaggerated Russia’s capabilities,” says Zysk. “Now we are in danger of exaggerating in the other direction. If Russia were preparing for a war with NATO, they’d be preparing very differently. They would use different kinds of weapons, morale would be better, their psychology would be different.”

Rick Newman is the author of four books, including “Rebounders: How Winners Pivot from Setback to Success.” Follow him on Twitter: @rickjnewman. You can also send confidential tips.