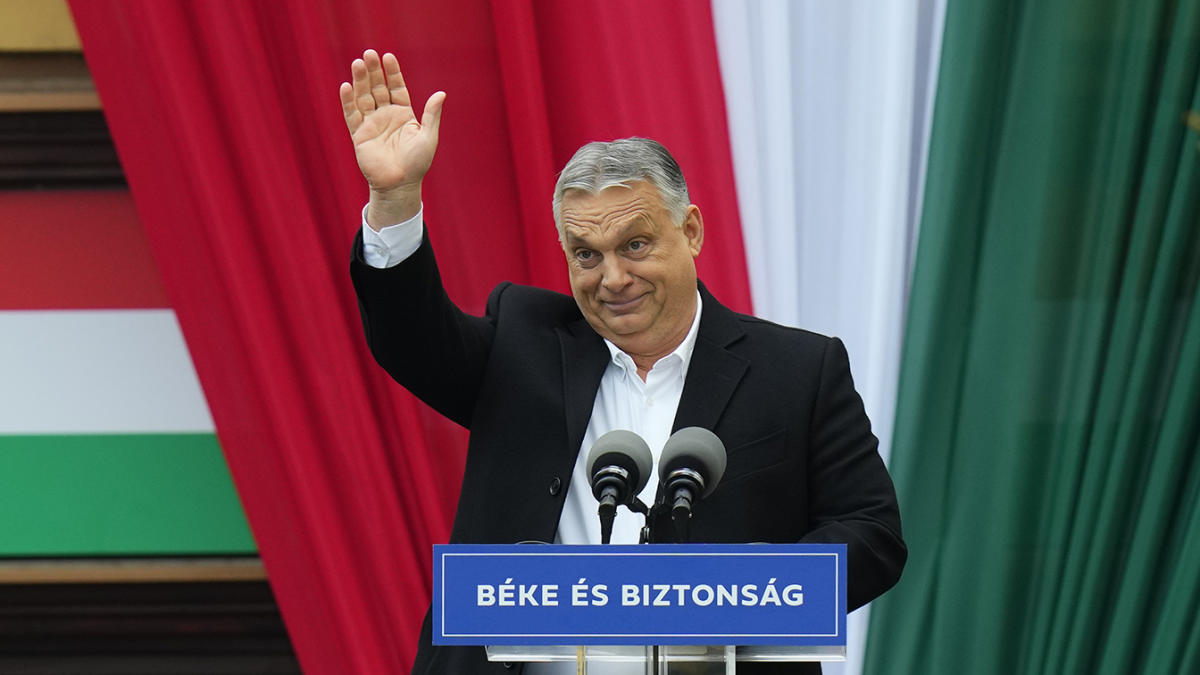 WASHINGTON — Even as other European leaders to support Ukraine in its effort to repel the invasion Russia launched in late February, Hungary’s nationalist, authoritarian prime minister, Viktor Orbán, remained defiantly aloof, unwilling to sacrifice his long-standing relationship with Russian President Vladimir Putin for the sake of a neighboring nation trying to assert its independence from Russia, as Hungary once had.

Like counterparts across the continent, Orbán had been subject to an impassioned appeal from Ukrainian President Volodymyr Zelensky. In Orbán’s case, Zelensky invoked Hungary’s uprising against communism in 1956, which was ruthlessly suppressed by Moscow. “There is no time to hesitate. It’s time to decide,” Zelensky told Orbán.

He also drew a distinction with his liberal opponents, who he said were willing to “sacrifice our interests says on the altar of Ukrainian interests and do what the president of Ukraine we should do.”

Those liberal opponents hope to score a major victory in Sunday’s parliamentary election, which will serve as a referendum not only on Orbán’s self-described “illiberal democracy” — a cousin of the “managed democracy” his friend Putin implemented in Russia — but on the imperiled future of democracy in Eastern Europe.

“In many ways, Hungary is a cautionary tale,” David Koranyi, a fellow at the Atlantic Council and a critic of the Orbán regime, told Yahoo News. He laments how, under Orbán, the “promising, newly minted democracy of the 1990s” has curdled into a repressive regime where, as in Russia, independent media outlets have been suppressed and democratic institutions bullied into submission.

Hungary under Orbán has also become something of a fixation with American conservatives; in January he received an endorsement from ally Donald Trump, who praised him as a “strong leader.”

Many on the right seem to admire Orbán for claiming victories in the same culture wars they have been waging for decades. Since returning to power in 2010 (he had previously served a single term as prime minister between 1998 and 2002), Orbán has pushed what he calls a “pro-family agenda” that is similar to the one supported by American evangelicals. He was also a staunch opponent of allowing migrants from Syria and North Africa into Hungary, and he built a border fence similar to the barrier Trump promised as a means of keeping migrants from Latin America out of the United States.

That earned Orbán a visit from Tucker Carlson in the summer of 2021. The Fox News host hosted a week of his primetime program from the capital city, Budapest, culminating in a one-on-one interview with Orbán. Hungary, Carlson told his American viewers, is a “small country with a lot of lessons for the rest of us.”

Orbán fandom on the American right “did have to do with his moves to ban abortion or same-sex marriage or otherwise curtail LGBTQ rights in Hungary,” the journalist Sarah Posner, who has covered Hungarian politics, told the radio program “On Point” last year. “They liked that. They also liked his appeals to not just ethnic nationalism but Christian nationalism, which is what they have been promoting here in the United States.”

Hungary is a starkly different cultural battleground from the United States. About 62% of Hungarians are Catholic today. The nation’s Jewish population, once large and thriving, was nearly eradicated in the final murderous months when the death camp at Auschwitz-Birkenau was in operation during World War II, while Muslims have never been nearly as welcome in Hungary as they have been in Western European countries like Germany and the United Kingdom.

Opponents of Orbán hope the mutual admiration will be disrupted with Sunday’s election, which they hope will be the culmination of years of political organizing under highly inauspicious circumstances. Liberal and centrist opposition groups have united behind Peter Marki-Zay, a young mayor from a southern city near the Romanian border. Hungary borders seven countries in all, and it has historically served at different times as an imperial power and as a vassal. Today it is both a member of the European Union and an ally of Russia — “a weak link in the chain” of NATO, as Koranyi put it.

Marki-Zay imagines a different future for Hungary, one more closely aligned with the West. “Putin and Orban belong to this autocratic, repressive, poor and corrupt world. And we have to choose Europe, West, NATO, democracy, rule of law, freedom of the press, a very different world: the free world,” he recently told the New York Times.

The sad irony of the Hungarian opposition’s increasing unity is that it is up against an authoritarian ruler as determined as ever to stay in power. Now that German Chancellor Angela Merkel has stepped down, Orbán is the European Union’s longest-serving head of state. Never especially shy about wielding state power to advance his own chance of reelection, he has recently gone so far as to use a coronavirus alert service to make a pitch ahead of Sunday’s election. Given the crosscurrents of fear and propaganda that mark Hungarian public discourse, Marki-Zay’s chances of victory are “lower than they should be,” Koranyi lamented.

Orbán has recently tried to edge away from Putin without alienating him, a tactic to spare Hungary from repercussions an embittered Kremlin could levy. The contrast is especially stark with Poland, where a nationalistic and conservative government has pivoted to support Ukraine. A similar move is highly unlikely to emanate from Budapest if Orbán remains in charge.

“There are really alarming similarities” between Putin’s Russia and Orbán’s Hungary, media scholar Eva Bognar of the Central European University in Hungary, told Yahoo News. The two countries are not identical, she cautioned, but the war in Ukraine could only bring the similarities into high relief. “Orbán has been very proud of being friendly with Putin,” Bognar said.

The special relationship between the two strongmen makes Sunday’s election a broader referendum on Hungary’s future. “Orbán really subordinated the country to Putin,” Hungarian politician Katalin Cseh recently told former Obama foreign policy adviser Ben Rhodes on the “Pod Save the World” podcast. “If Orbán stays in power, we will become the pariah of the EU for a very long time to come.”

What happened this week in Ukraine? Check out this explainer from Yahoo Immersive to find out.