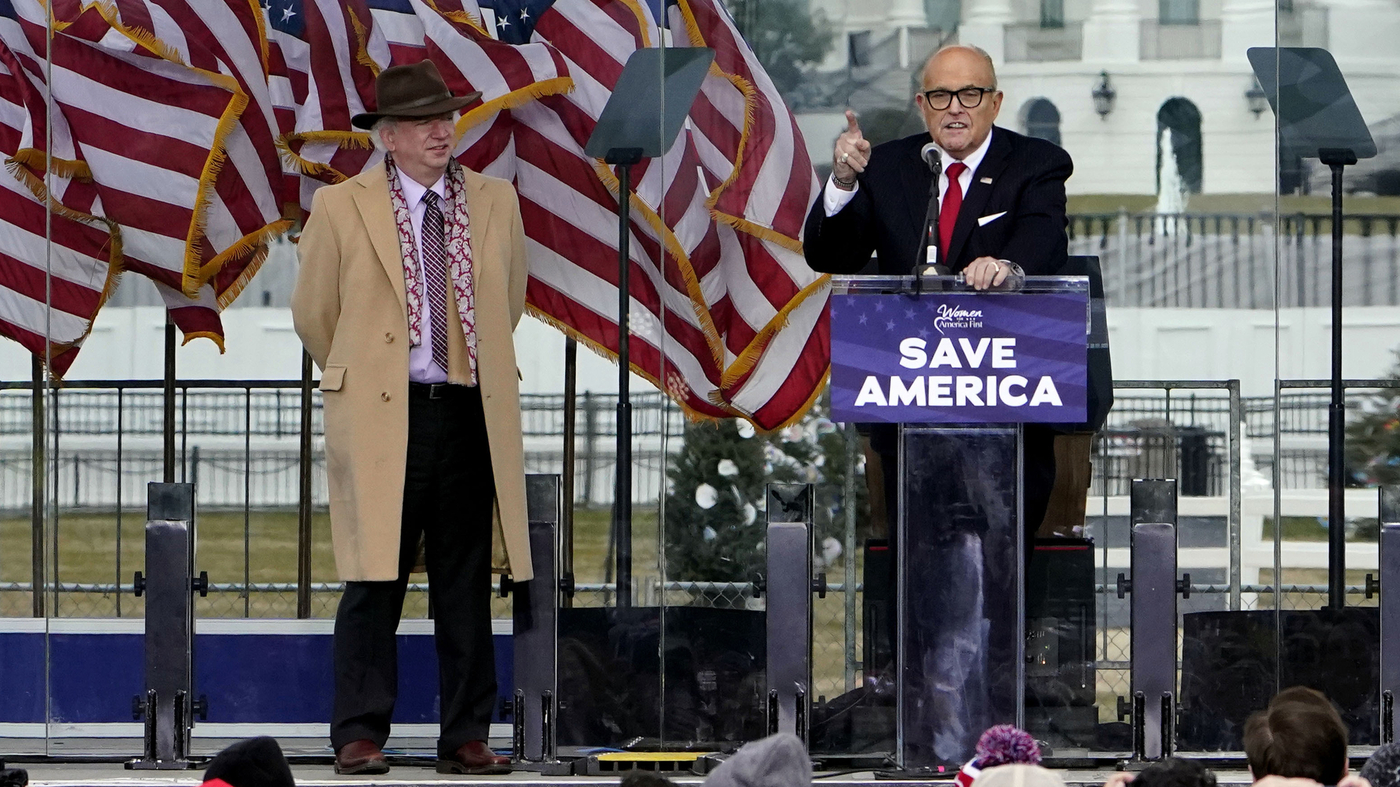 John Eastman, left, listens as former New York Mayor Rudy Giuliani speaks at the Jan. 6, 2021, “Save America” ​​rally that preceded the attack on the US Capitol.

John Eastman, left, listens as former New York Mayor Rudy Giuliani speaks at the Jan. 6, 2021, “Save America” ​​rally that preceded the attack on the US Capitol.

At the center of Thursday’s House hearing investigating the Jan. 6 insurrection was a central lawyer to former President Donald Trump’s efforts to overturn the 2020 election: John Eastman.

After Joe Biden won the election, Trump took several routes to try to overturn the election: he tried lawsuits, which failed; he tried pressing state officials, which also failed; and he ultimately tried to get former Vice President Mike Pence to overturn the results when the electoral votes were to be certified on Jan. 6, 2021.

That last plan was drafted in a memo by Eastman.

Thursday’s hearing revealed more detail about Eastman’s efforts to push bogus legal arguments — even after the attack on the Capitol.

How did Eastman get involved in Jan. 6?

Eastman has a long background in conservative law, having clerked for Supreme Court Justice Clarence Thomas in the late 1990s and was a chairman in the Federalist Society. He worked at a law firm in California before leaving to teach at Chapman University, where he also served as dean, but left shortly after addressing the “Save America” ​​rally before the attack on the Capitol.

Eastman began advising Trump in August 2020, he revealed in court papers, but did not start working closely with him until December 2020 after the results of the election had been decided.

Before he clerked for Thomas, Eastman clerked for Judge Michael Luttig — who in Thursday’s hearing shot down his former clerk’s argument that Trump used to pressure Pence.

Eastman acknowledged his theory would lose, 9-0, in the Supreme Court

Greg Jacob, Mike Pence’s former counsel and the other witness at Thursday’s hearing, said there was relentless pressure on Pence to try and overturn the election on Jan. 6.

Two days prior to the insurrection, Jacob said he and Pence met with Eastman and were presented with two of his theories: Pence could reject the electors on Jan. 6 and essentially declare Trump president or he could declare a 10-day recess and send the slates back to “disputed” states — even though no state was disputed.

But Jacob said Thursday that even Eastman acknowledged that this legal plan would not hold up in the Supreme Court, and that they would lose, 9-0, if Pence did what Trump wanted him to do. And he said his proposal violated the Electoral Count Act.

Eastman also said that the legal argument shouldn’t have been used by Al Gore in 2000 and it shouldn’t be used by Vice President Kamala Harris in 2024.

“Al Gore did not have a basis to [overturn the election results] in 2000, Kamala Harris shouldn’t be able to do it in 2024, but I think you should do it today,” Jacob said Eastman told him.

Trump lawyer John Eastman, left, is seen in a video during a hearing of the House select committee investigating the Jan. 6 insurrection on Thursday.

Trump lawyer John Eastman, left, is seen in a video during a hearing of the House select committee investigating the Jan. 6 insurrection on Thursday.

Even after the insurrection, Eastman was still trying to overturn the election

Even after Jan. 6, Eastman was still talking about the 2020 election not yet being certain.

Former White House lawyer Eric Herschmann told investigators that the day after the insurrection, Eastman raised the issue of disputed investigators in Georgia, and Hershmann recalled what he told Eastman in their phone call.

Hershmann said he then told Eastman to get a “great f****** criminal defense lawyer. You’re going to need it.”

Eastman sought a pardon but did not get one

“I’ve decided I should be on the pardon list if that’s still in the works,” Eastman wrote, according to the email presented as evidence by the Jan. 6 committee

He did not receive one.

Eastman was questioned by the House committee but pleaded the Fifth Amendment during his entire testimony. Rep. Pete Aguilar, D-Calif., who led questioning in Thursday’s hearing, said Eastman plead the Fifth 100 times.

Eastman did not respond to NPR’s request for comment.

What criminal charges could Eastman face?

Also central to the House committee’s investigation has been an opinion issued by a federal judge, David Carter, in March.

Carter has been instrumental in the process of getting hundreds of emails from Eastman released.

In his March ruling, Carter said, “based on the evidence, the court finds that it is more likely than not that President Trump and Dr. Eastman dishonestly conspired to obstruct the Joint Session of Congress on January 6, 2021.”

Carter notes, however, that his findings do not have direct legal consequences. Charges against Eastman and others would have to come from the Justice Department.

“More than a year after the attack on our Capitol, the public is still searching for accountability. This case cannot provide it,” Carter wrote. “This is not a criminal prosecution; this is not even a civil liability suit.”

Neal Katyal, a law professor at Georgetown University Law Center, outlined in a New York Times op-ed that Trump, Eastman and others in the former president’s orbit, could face charges of obstructing an official proceeding — agreeing with Carter’s assessment. They could potentially also face charges of “conspiracy to defraud the United States,” Katyal wrote.