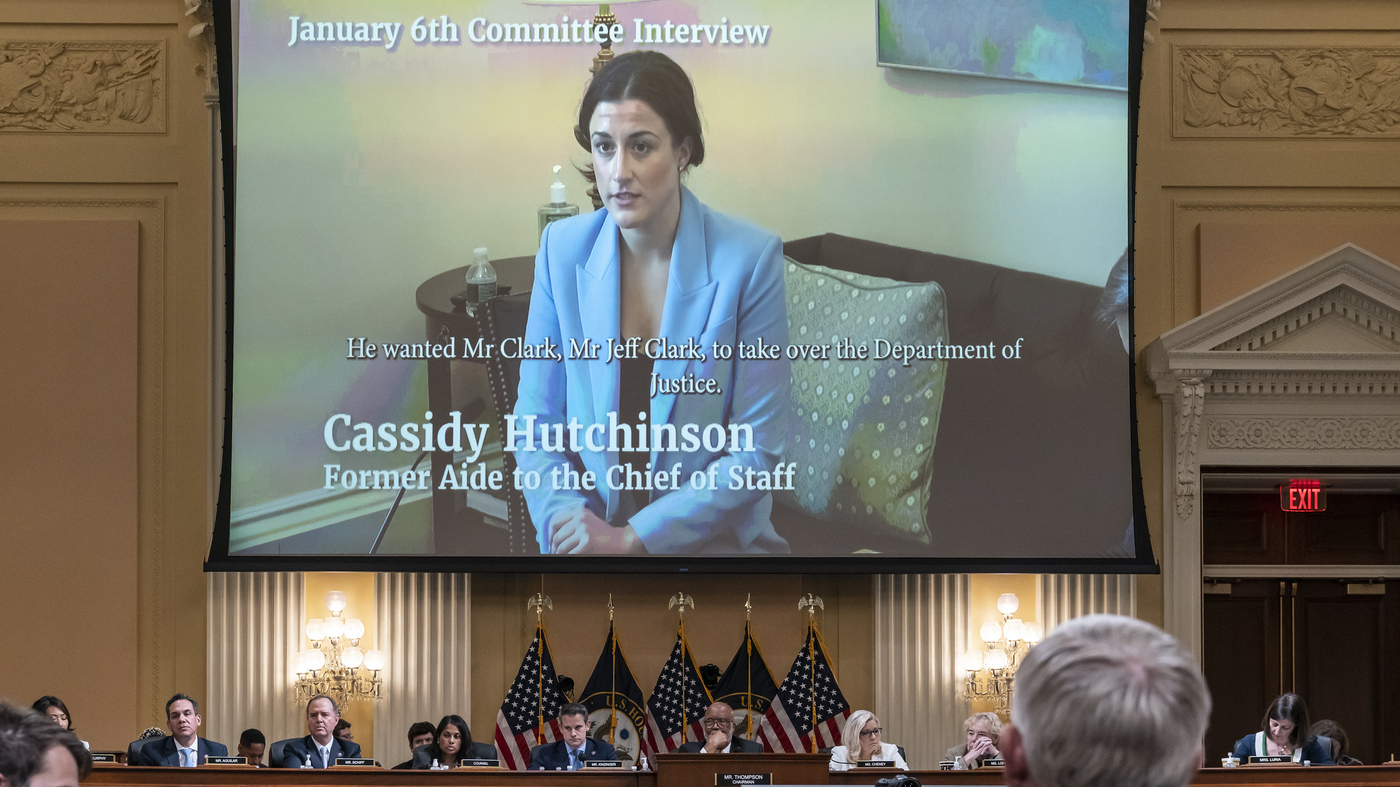 Cassidy Hutchinson, a top former aide to Trump White House Chief of Staff Mark Meadows, is seen in a video of her interview with the House select committee investigating the Jan. 6 attack on the US Capitol on June 23.

Cassidy Hutchinson, a top former aide to Trump White House Chief of Staff Mark Meadows, is seen in a video of her interview with the House select committee investigating the Jan. 6 attack on the US Capitol on June 23.

Cassidy Hutchinson revealed one of the Jan. 6 committee hearing’s biggest bombshells: last week, in a taped deposition, she described how Republican lawmakers advocated for blanket pardons for participants of a Dec. 21 White House meeting.

Today Hutchinson, who had been an aide to former White House Chief of Staff Mark Meadows, will appear as the panel’s surprise live witness for an unscheduled hearing, NPR has confirmed. The committee announced Monday that it would hold a hearing Tuesday “to present recently evidence and receive witness testimony,” but as of Tuesday morning it had not formally announced any witnesses or provided other details. To watch a livestream of the hearing starting at 1 pm, click here.

The secrecy surrounding the hearing appears out of place; Hutchinson’s cooperation with the committee has been an open, public fact.

Given the urgency of the hearing and the major pieces of information Hutchinson has already shared with the Democrat-led committee, expectations are growing that this former top Republican staffer will reveal something explosive when she sits down to testify.

What Hutchinson has said so far

Last week the former Meadows aide said in that video testimony that GOP Rep. Matt Gaetz had been asking for a pardon since “early December,” and noted that Reps. Andy Biggs, Louie Gohmert, Mo Brooks and Scott Perry also sought pardons from the White House. John McEntee, a former White House aide, also said Gaetz had told him he asked Meadows for a pardon.

Hutchinson also testified she had heard that Rep. Marjorie Taylor Greene of Georgia had requested a pardon from the White House counsel’s office. All of the members mentioned by name later denied the allegations.

The committee has shared video of two instances of her speaking about what the White House did leading up to, during, and after the violent attack on the Capitol. Earlier this month, some in Washington had posited she would testify at one of the committee’s public hearings live.

Hutchinson previously testified that Meadows had been warned of “intel reports saying that there could potentially be violence on the 6th.” She also told the committee that Meadows burned documents in his office after a meeting with Rep. Scott Perry, Politico reported, though it is not known what those documents were. During last week’s committee hearings, Perry emerged as a key figure in former President Donald Trump’s attempts to convince followers of a variety of lies about the soundness of the 2020 election.

Hutchinson has previously told the committee that she was around Meadows for a portion of Jan. 6, though not all of the events. She has also appeared in recorded testimony that former Trump lawyer Rudy Giuliani, several of his associates and Meadows attended a meeting where they discussed having alternate electors in key swing states where Trump lost.

Politico also previously reported that Hutchinson has made a recent switch in legal counsel from Stefan Passantino, who reportedly still has close ties to Trump, to Jody Hunt of Alston Bird. Hunt is a former Justice Department attorney with close ties to former Attorney General Jeff Sessions.