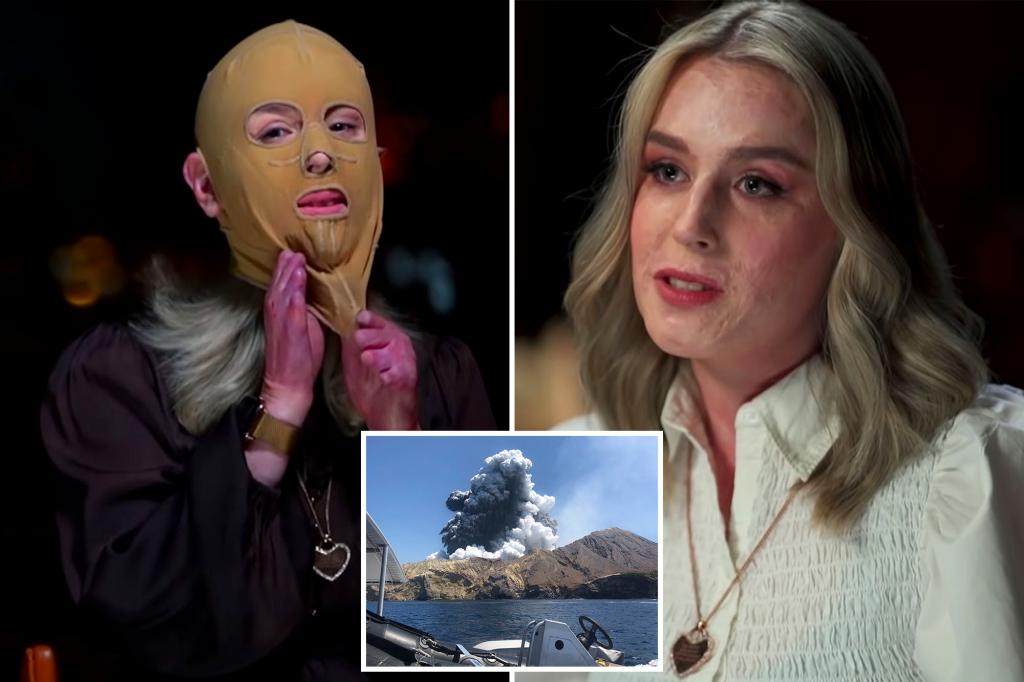 A survivor of New Zealand’s White Island volcano eruption has removed her face compression bandage for the first time since the natural disaster left her with excruciating burns to 70% of her body.

Stephanie Browitt was one of 47 tourists exploring the volcano on Dec. 9, 2019, when it erupted, spewing gases, rock and ash. Twenty-two of the tourists were killed, including Browitt’s father and younger sister.

Browitt, now 26, was airlifted to a hospital and spent two weeks in a coma fighting for her life after sustaining third-degree burns to the majority of her body.

In an emotional interview with “60 Minutes Australia” on Sunday, the survivor finally revealed her face for the first time in two-and-a-half years, pulling off the bandage and sobbing: “I have learned that the fight for survival is the real thing. . . I never knew I had this in me.”

Since the disaster, Browitt has been forced to undergo a series of skin-graft surgeries, leaving her with bandages covering much of her body.

The face compression mask was the final dressing to be removed, with the brave Australian choosing to take off the bandage on camera.

“It’s been a long time. It’s felt like forever and as though this day would never come,” Browitt stated as she showed her face for the first time.

The survivor also shared horrific photos taken shortly after the disaster, revealing the severity of her injuries.

One image shows the third-degree burns Browitt sustained to her entire back, while another shows several of her fingers burned off.

During the interview, Browitt also spoke about the horrifying day she was visiting White Island when the volcano erupted.

The young Australian was on the island with her father and sister when they began to see black smoke billowing from the top of the crater.

“Only a few seconds later, we heard the front tour-guide scream, ‘Run,’ and that’s when we realized and made the split-second decision to just bolt,” she recalled to the program.

Browitt’s younger sister, Krystal, 21, never made it off the island. Her body was retrieved several days later.

Browitt’s father, Paul, was airlifted to a hospital but died from his injuries a month later.

“I wish my dad and sister were still alive and still with me,” Browitt declared. “I wish that day would leave me. It has caused me many sleepless nights. There are many times when my mind won’t shut off. Even now, it still hurts a lot. I just hope my sister and dad can see me now and what I have gone through.”

After the interview, Browitt took to Instagram to share several selfies, with thousands of supporters left in awe of both her bravery and remarkable recovery.

“I bet your dad and sister are super proud of you,” one follower fawned. “A real fighter you are.”