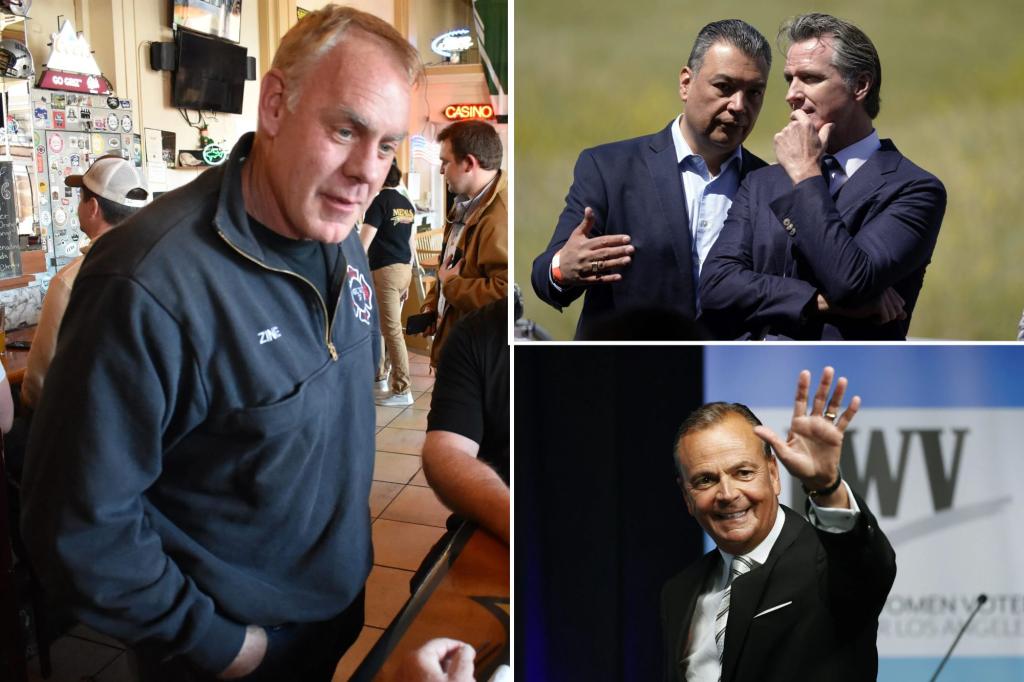 LOS ANGELES — Primary elections in seven states Tuesday will set the stage for US House and Senate races this fall, with many contests shaped by political fissures in both major parties and the lingering shadow of former President Donald Trump.

With control of Congress in play, a string of Republican House incumbents are contending with challenges from the political right, and some rivals are embracing Trump’s baseless claims of election fraud in his 2020 loss to President Joe Biden.

No incumbent governors or senators appear to be in imminent danger. In Iowa, several Democrats are jockeying for the chance to take on seven-term Republican Sen. Chuck Grassley, with the campaign showcasing the breach between the Democratic Party’s progressive and establishment wings.

California is a Democratic fortress where the party holds every statewide office and its voters outnumber registered Republicans by nearly 2-to-1. Gov. Gavin Newsom and US Sen. Alex Padilla face little-known competitors.

But Republicans retain pockets of strength in some US House districts that are expected to be among the most competitive races in the country.

In a heavily Democratic district in the state’s Central Valley farm belt, Republican US Rep. David Valadao is seeing blowback for his vote to impeach Trump over the Jan. 6 US Capitol insurrection. Republican Chris Mathys has made Valadao’s vote a centerpiece in his campaign dele to oust him.

In a Democratic-leaning district north of Los Angeles, several Democrats are hoping to take on Republican Rep. Mike Garcia, who is expected to advance to November with one of the Democrats as the top two finishers in the race. Garcia rejected electoral votes from Arizona and Pennsylvania being cast for Biden and opposed Trump’s impeachment after the Capitol insurrection.

The crowded Los Angeles mayor’s race is shaping up to be a fight between Rick Caruso, a pro-business billionaire Republican-turned-Democrat who sits on the board of the Ronald Reagan Presidential Foundation, and Democratic US Rep. Karen Bass, who was on Biden’s shortlist for vice president. If no candidate clears 50%, the top two finishers advance to a November runoff.

In another closely watched election, San Francisco voters are considering whether to recall District Attorney Chesa Boudin, a progressive Democrat who critics say has failed to prosecute repeat offenders, amid widespread frustration with crime and homelessness.

Republicans have gained an advantage in the state over the past decade, and the Senate primary provides a snapshot of the minority party’s battle for relevance.

Retired Navy Vice Adm. Michael Franken is waging a competitive contest with former US Rep. Abby Finkenauer in a bid to take on the 88-year-old Grassley, who has been endorsed by Trump.

Finkenauer is a 33-year-old, former two-term state representative who argues her youth and more recent experience in Iowa make her a better fit to challenge a Republican first elected to the Senate in 1980. She has made term limits a centerpiece of her campaign.

Franken, 64, is promoting a progressive agenda, including adding a public insurance option to the Affordable Care Act. He is from conservative western Iowa and argues he could be more competitive against Grassley by whittling into the senator’s margins in heavily Republican areas.

Physician Glenn Hurst, a councilman for a small western Iowa city and the Iowa Democratic Party’s chair for its rural caucus, is running to the left of both Finkenauer and Franken.

Meanwhile, three Republicans are competing for a chance to run against Iowa’s lone Democratic member of Congress, Rep. Cindy Axne.

Republican US Rep. Steven Palazzo is facing his largest-ever field of challengers after a congressional ethics watchdog raised questions about his campaign spending.

A 2021 report by the Office of Congressional Ethics found “substantial reason to believe” Palazzo, a military veteran who serves on the Appropriations and Homeland Security committees, abused his office by misspending campaign funds, doing favors for his brother and enlisting staff for political and personal errors. His then-spokesperson, Colleen Kennedy, said the probe was based on politically motivated “false allegations.”

His six opponents include a sheriff, Mike Ezell, and a state senator, Brice Wiggins. If no candidate wins a majority of votes, a runoff will be June 28.

It’s the first time since 1993 that the state will have two House seats, after one was added to account for Montana’s growing population.

Zinke, Trump’s former Interior Department secretary, technically is in an open race for the new seat. But the former Navy SEAL is widely considered the de facto incumbent, since he twice won elections for the state’s other House seat before stepping down in 2017 to join the Trump administration.

His opponents are drawing attention to Zinke’s troubled tenure at the agency, which was marked by multiple ethics investigations. One investigation determined Zinke lied to an official ethics agency about his continued involvement in a commercial real estate deal in his hometown. He’s faced a smear campaign over his military service from the extreme right wing of his party and questions about his residency of his following revelations that his wife of his declared a house in California as her primary residence.

His opponents in the GOP primary include former state Sen. Al “Doc” Olszewski, an orthopedic surgeon and hard-line conservative who has tried to paint Zinke as a “liberal insider.”

In the state’s other district, first-term Rep. Matt Rosendale, who has Trump’s endorsement, will look to fend off three Republican primary challengers.

A dozen House districts are on the ballot.

Trump said in 2021 he would back a challenger to long-serving Republican Rep. Chris Smith, but that never happened. The absence of an endorsement hasn’t stopped conservative talk show host Mike Crispi, one of Smith’s Republican challengers, from claiming Trump’s mantle.

On the Democratic side, US Sen. Bob Menendez’s son, Rob, is running for a seat being vacated by retiring Democratic Rep. Albio Sires. Menendez, the Port Authority of New York and New Jersey commissioner, locked up party support upon entering the race.

Five Republican candidates are competing to take on Democratic Gov. Michelle Lujan Grisham. The incumbent is favored to keep her job in a state where Democrats control every statewide office and dominate the Legislature.

Former television meteorologist Mark Ronchetti and state Rep. Rebecca Dow are prominent GOP contenders in a contest touching on concerns about US border security, urban crime, inflation and the teaching of race and ethnicity in a heavily Latino and Native American state.

A trio of Republican incumbents face primary challengers running on their political right.

Gov. Kristi Noem, who is considered a potential White House prospect, is favored to win the GOP nomination. One rival, state legislator Steve Haugaard, has argued that Noem spent more time trying to build a national political profile than focusing on her job at home. She’s mostly ignored him.

US Sen. John Thune faced Trump’s ire after dismissing the former president’s election fraud claims. However, no well-known challenger has emerged in Thune’s reelection bid. One of his opponents, Mark Mowry, was among the crowd that demonstrated near the Capitol on Jan. 6.

In the House, Republican state lawmaker Taffy Howard is trying to unseat GOP Rep. Dusty Johnson in the state’s lone district. Johnson touts his conservative voting record while keeping an ability to work across party lines, but Howard has tried to paint him as a foot soldier for House Speaker Nancy Pelosi.