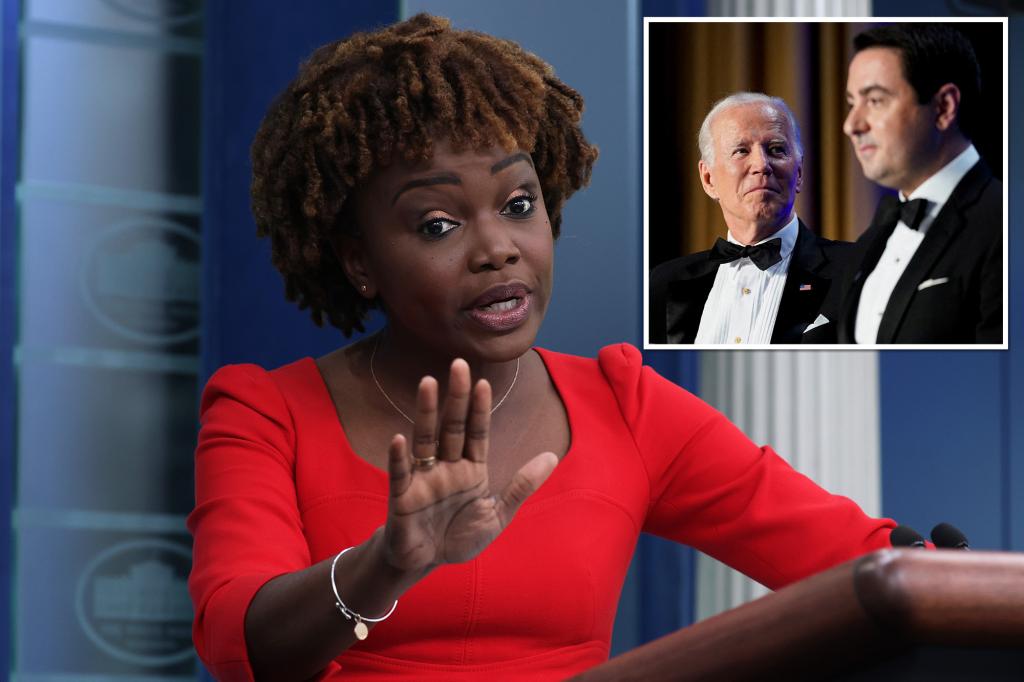 White House Press Secretary Karine Jean-Pierre on Thursday denied that President Biden’s press office is “blacklisting” reporters and news outlets when pressed by The Post on a mysterious pre-screening process in place for presidential events.

Jean-Pierre said she didn’t know how the press office is picking reporters for indoor events where Biden often takes questions. Journalists suspect the year-old practice is a way to shape questions posed to Biden.

The press secretary proceeded to commit to giving White House Correspondents’ Association President Steven Portnoy a full explanation at their next meeting in coming days. Portnoy confirmed to The Post that he has requested a meeting with Jean-Pierre to discuss access issues and the association has called for the screening process to end and for all large indoor events to be open to all reporters.

“The Correspondents Association has tried in vain to figure out how this process works,” The Post told Jean-Pierre at her regular briefing. “And over time, it has kind of morphed into a bit of a blacklist where certain large media outlets such as my own are almost never [selected].”

“I represent the fourth largest newspaper in the country and I haven’t been selected since November,” The Post replied.

“That’s a jump forward to a blacklist, but I’m listening,” Jean-Pierre said.

“It’s not just me, it’s certain others,” The Post replied.

“The Correspondents Association actually wants this to be done away with. But I was hoping that you — I know you’re new in the position, but perhaps explain how the selection works,” The Post followed up.

“Can we commit to getting an answer to the Correspondents Association?” The Post concluded.

“You’re talking about Steven Portnoy? I talk to Steve all the time. We’re talking, I believe, if not today, tomorrow. We’re checking in and we’ll have that conversation. I’m sure he’ll bring it up,” she said.

The pre-screening process is a significant deviation from historical practice and reporters have been given a wide range of conflicting explanations of the criteria.

In prior administrations, large indoor events in the White House East Room and Eisenhower Executive Office Building were open to all reporters. Last year at a briefing, then-press secretary Jen Psaki declined to say how the selection process works.

The practice began last year as officials cited “spacing constraints” caused by the COVID-19 pandemic, but it has hardened long after the White House ended indoor mask rules and returned to full-capacity briefings.

In a sign of how little the coronavirus bears on current capacity, Biden on Wednesday told guests that were tightly packed into the East Room that they would have to lean on one another because they were too crammed together to sit.

The reporters chosen to attend presidential events join members of the rotating daily press pool and over time clear patterns have emerged.

Brian Karem, a veteran reporter who writes for left-leaning Salon, has led press corps pushback to the prescreening process — including drafting a letter to Psaki in April that was signed by many reporters, including Portnoy, who works for CBS News Radio.

“I’ve been told point-blank that part of the reason for [the] restriction — at least in my case — is because I’m not liked and that I give you all grief. Let me be equally candid. My job is not to be liked, nor is it to be concerned about such things,” Karem wrote in that letter.

“Access shouldn’t be discretionary or denied based on any reason remotely related to such things. The administration’s continued efforts to limit access to the president raises all kinds of questions when you cannot logically defend opening up the briefing room — while not opening up the larger East Room.”

Karem told The Post after Jean-Pierre’s briefing that he hopes the practice will end soon.

“I urge the press secretary to do what’s right. if [former Vice President Mike] Pence can do the right thing, then so can the Biden administration,” Karem said.