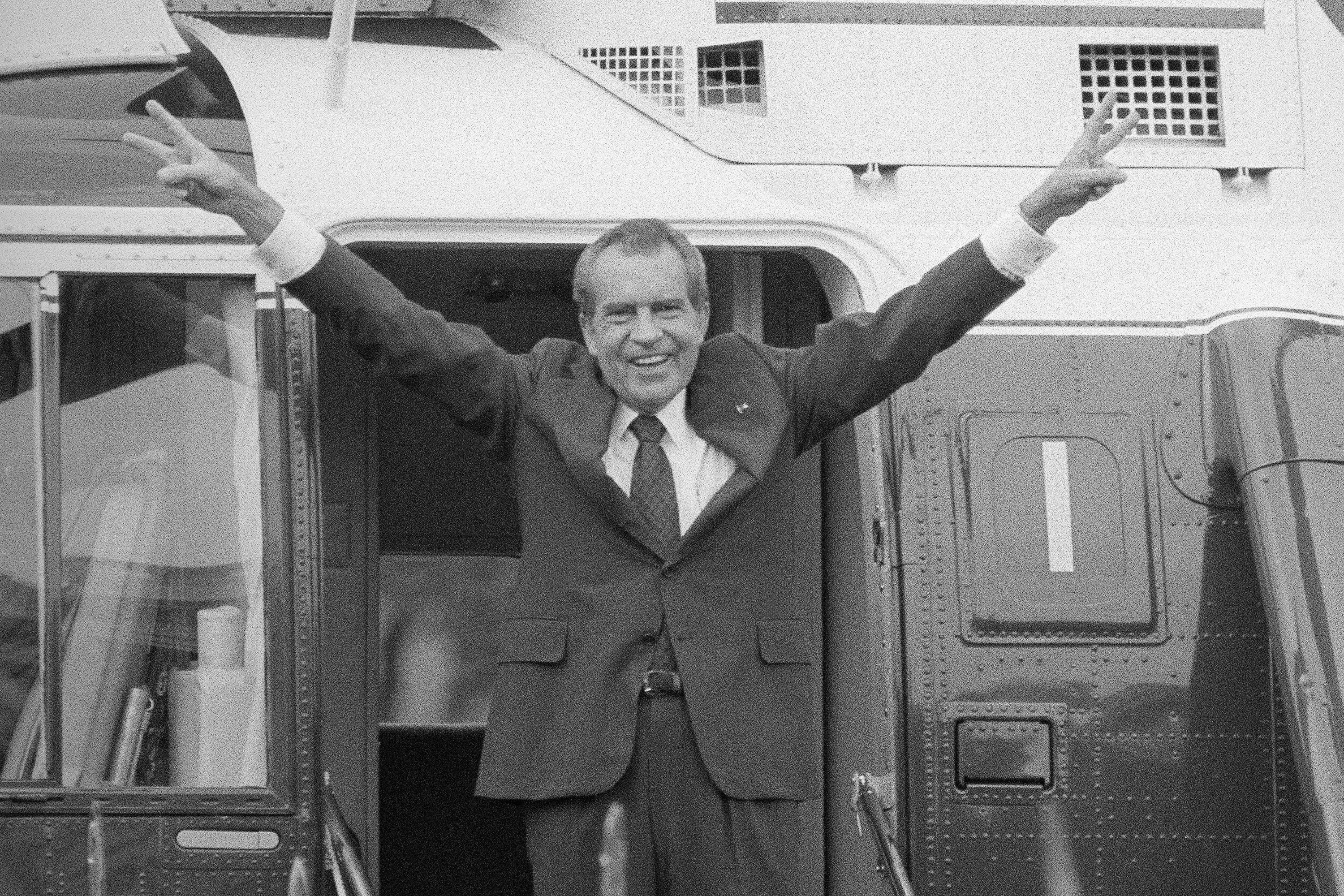 WASHINGTON (AP) — The wreckage of Watergate and Jan. 6 are a half-century apart yet rooted in the same ancient thirst for power at any cost.

Mysteries from both affairs hardens as the House inquiry into the Jan. 6, 2021, uprising at the Capitol intersects with this week’s Watergate 50th anniversary.

Is there a smoking gun to be found in Donald Trump’s deceptions? Or did we already see it when he summoned angry supporters to a “wild” time in Washington, called for them to “fight like hell” and mused that perhaps his vice president — one of the few “no” men in his compliant cabal — should be hanged like the insurrectionists demanded?

Trump had lost the election and sought to cling to power. But Nixon? A key question may be why he even bothered to go rogue.

Nixon was on a comfortable path to reelection when bumbling burglars tied to his campaign committee broke into Democratic Party headquarters at the Watergate office building 50 years ago Friday and got caught.

The chapter-upon-chapter exposure of his cover-up and efforts to obstruct justice drove him from the office nearly two years later when he quit rather than face a likely conviction in an impeachment trial. Three Republican leaders from Congress went to the White House and helped convince him that he was doomed.

In contrast, Trump was desperate, having convincingly lost the 2020 election when he dispatched his own bumblers — lawyers, aides, hangers-on — as well as the violent mob at the Capitol on a quest to upend the results and keep him in office. Few in his party from him publicly urged him to accept defeat.

Watergate is the American presidential scandal by which all others are measured. It brought down the president. Yet Jan. 6 was the one that spilled blood.

Watergate had a powerful afterburn, leading to Republicans being coughed out of Congress by the dozens in 1974. This time, there is near unanimity that the party will make gains.

Michael Dobbs, author of “King Richard: Nixon and Watergate — An American Tragedy” from 2021, said the system worked in Watergate because Congress, the courts and the press did their job in establishing a chain of criminal activity that led Nixon to resign.

“The system was under stress then,” he said, “but is under much greater stress today.”

When the Senate Watergate committee conducted its landmark hearings starting in May 1973, inflation was heading toward 9% by year’s end, about where it is now. The stock market crashed. Then as now, people had pressing distractions.

But Americans were riveted by the spectacle of a president sinking slowly into disgrace. More than 70% told a Gallup poll they watched the televised hearings that spread over nearly three months of that summer.

The Jan. 6 hearingsto date, are less about investigators discovering new facts than about showing and telling what they’ve already found out in months of methodical work.

To Dobbs, evidence of Trump’s direct involvement in planning or inciting the riot with the intention of overturning the election would constitute a Nixonian smoking gun.

The challenge for the Jan. 6 inquiry and any prosecution that may follow is “the ambiguous nature of Trump’s statements from a legal point of view,” he said. ”’Fight like hell’ can be interpreted in different ways.”

In releasing previously recorded testimony from close associates of Trump, the panel has exposed the extent to which Trump’s circle knew his case about a stolen election was a sham. Even his daughter Ivanka Trump was not buying it.

Trump’s attorney general, William Barr, testified that the president’s arguments were “detached from reality” if he really believes them.

Harsh words but to what effect?

Trump’s election denialism courses through the campaigns of far-right Republicans in the 2022 midterm election seasonsome prevailing in their primaries. The hearings will in no way be the last word on Trump’s lies.

“Trump is constitutionally unable to let criticism pass,” said Southern Methodist University political scholar Cal Jillson. “So expect a rising tide of recriminations, a lengthening enemies list and a program of retribution stretching out into the future.

“Other Republican leaders will ponder the damage this might do to the party,” he added, “but, as yet, there are no Howard Bakers on the horizon.”

Baker personified the politics of the time in Congress, partisan but not poisonous. He was the Rep. Liz Cheney of the day, but on his way up in the Republican Party, not an outcast from it like the endangered Wyoming congresswoman, who is fierce in her disdain for Trump and fellow Republicans who won’t cross him.

Baker expressed instinctive loyalty to Nixon at first — “I’m your friend,” he recalled telling him face to face when the hearings started. But as the top Republican the Watergate panel, he listened on questioned, dug in over the hundreds of hours of hearings and saw the corruption.

His famous question — “What did the president know and when did he know it?” — was actually posed as a tentative defense of the president, because Baker expected the answer to be not much.

“I believed that it was a political ploy of the Democrats, that it would come to nothing,” Baker told The Associated Press in 1992. “But a few weeks into that, it began to dawn on me that there was more to it than I thought, and more to it than I liked.”

The persistence and gravity of his questioning made the mild-mannered Tennessee senator an unlikely heartthrob. Love letters poured into his office. A women’s magazine called him “studly.”

The Watergate of four Democrats and three Republicans was formed by a competent vote committee in the Senate, unheard of today on almost any issue of. It was charged with probing the Watergate affair and “all other illegal, improper, or unethical conduct” in the 1972 campaign.

The House Jan. 6 committee, in contrast, was formed on a 222-190 vote. The only two Republicans who voted for the committee, Cheney and retiring Rep. Adam Kinzinger of Illinois, were put on it.

Where Trump loudly proclaimed his grievances and provocations, Nixon sounded off in private, or what he thought was private. It was the White House taping system that Nixon had installed for posterity that damned him, when the Supreme Court forced him to turn over the tapes.

In a June 23, 1972, conversation six days after the burglary, Nixon’s chief of staff, HR Haldeman, is heard recommending to Nixon that the FBI be told to drop his investigation of the break-in before the bureau could trace the crime to the White House or Nixon himself.

“There’s some business here we don’t want you going any further on,” Haldeman suggested the FBI chief be told.

“Alright, fine,” Nixon concluded. “Play it tough. That’s the way they play it, and that’s the way we’re going to play it.”

That was the smoking gun, a bullet flying for the purpose of obstructing justice.

A day after the break-in, the AP reported that one of the burglars was a paid security official of the Nixon campaign, the first tentative tie to the president and one that surprised police and prosecutors.

Bob Woodward and Carl Bernstein later confirmed the report to The Washington Post before going on to bulldoze everyone else with their blockbuster Watergate exclusives pinning the cover-up directly on the president.

The heroes of Watergate, Bernstein now says, were not primarily the journalists who exposed Nixon’s misdeeds or the Democrats who led the charge but “Republicans who had the courage to say this is not about ideology, this is about illegality.”

All these years later, it remains unknown who ordered the break-in. There is no evidence that Nixon did so directly, though there is no ambiguity over the fact he mounted a coverup and otherwise played dirty.

Nixon created the “paranoid culture” that spawned Watergate, Dobbs said. “The conspiracy took on a life of its own, driven forward by crazy operators like Gordon Liddy anticipating the president’s wishes.”

Fifty years from now, what will Americans say about Jan. 6?

Historian Michael Beschloss, in Twitter commentary about the hearings, said the answer depends on whether America by then is a democracy or autocracy. “If the latter, the nation’s authoritarian leaders might celebrate January 6 as one of great days in US history,” as Trump has described it now.

He also asked a question that can never be definitively answered.

“What would have happened to our country if the January 6 coup had succeeded?”