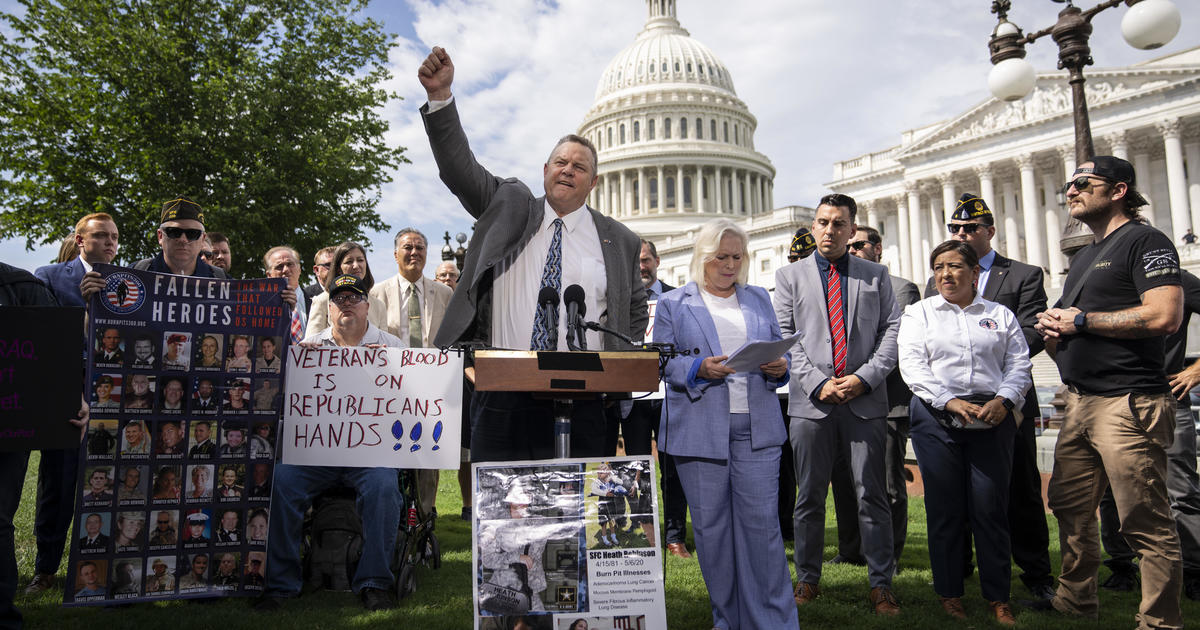 The Senate failed to pass a procedural vote Wednesday that would’ve cleared the way for a vote on legislation to expand benefits for the estimated 3.5 million veterans exposed to toxic burn pits during America’s wars in Afghanistan and Iraq.

The bill, known as the Honoring Our PACT Act, passed both the House and the Senate with bipartisan support in June, but due to a snag in the bill’s language, it needed to go back and pass the House and Senate again. On Wednesday evening, 25 Republican senators reversed their support from June and voted on a procedural vote to advance the legislation.

Veterans have come home with a number of illnesses, including terminal cancers, but have been forced to argue to the Department of Veterans Affairs their illnesses were related to burn pit exposure. The legislation would have removed the burden of proof from veterans and their families by presuming a number of conditions could be related to exposure to toxic fumes from burn pits.

President Joe Biden is a strong supporter of the bill. at the State of the Union in Marchhe called on Congress to take action on burn pits, which he believes may have been a factor in his son’s Beau’s Terminal Brain Cancer.

At a press conference Thursday in front of the US Capitol initially scheduled in anticipation of the bill passing the Senate, Veterans Service Organizations and sponsors of the legislation decreed the sudden about-face from senators who just last month voted in favor of the bill.

“I have never seen anything that’s happened like what happened yesterday and what it compounds and makes it that much more difficult is we in essence yesterday took benefits away from the people who have been impacted by war – that we felt off to war,” Democratic Sen. Jon Tester from Montana said at the press conference.

Other speakers at the press conference, including former “Daily Show” host Jon Stewart, lit into Congress with expletives.

“This is an embarrassment to the Senate, to the country, to the founders and all that they profess to hold dear. And if this is America first, then America is f*****,” Stewart said.

The speakers at the press conference have advocated for easier access to health care for veterans exposed to toxic fumes from open-air burn pits, holes in the ground where the military would dump trash and burn it – sometimes using jet fuel as an accelerant – to dispose of it.

The press conference was supposed to be a happy affair, but instead, the speakers relayed their shock at the failure to move forward the legislation that seemed like a done deal in June.

US Army veteran Aleks Morosky of the Wounded Warrior Project attended the event along with representatives from several other Veterans Service Organizations.

“We make a promise to people who serve in the military that we’ll support them if they get wounded,” Morosky said. “Passing the PACT Act today would have finally kept that promise for veterans with toxic wounds. But instead, that promise is still being broken.”

Republican Sen. Pat Toomey of Pennsylvania voted no in June and Wednesday because of how the money is accounted for, though he supports the purpose of the legislation.

Toomey objects to the bill because it includes language that would move money from discretionary to mandatory spending, freeing up about $400 billion in discretionary spending for anything, including programs unrelated to veterans

Twenty-five Republicans who voted yes in June joined Toomey and voted no on Wednesday. Because several senators weren’t present for the vote due to COVID and Sen. Patrick Leahy was out as he recovers from hip surgery, the Senate failed to reach 60 votes to overcome the filibuster.

Tester said the Senate Appropriations Committee should be able to address the issues Toomey raised but instead Toomey and other Republican senators blocked the procedural vote. Toomey on Wednesday said he and others were willing to fix the issue by a voice vote and pass the bill.

It will be difficult for the Senate to pass the bill and send it to the White House before the August recess, unless the Republicans are allowed to pass amendments on discretionary vs. mandatory spending, since there are a few senators isolating after testing positive for COVID.

Democratic Sen. Sherrod Brown of Ohio during Thursday’s press conference said the Senate should not go home until this bill is passed and on its way to the White House.

“This delay might not sound like a big thing but number one, we don’t have the bill passed and number two, there are going to be veterans who die between now and when this bill passes,” Tester said Thursday.