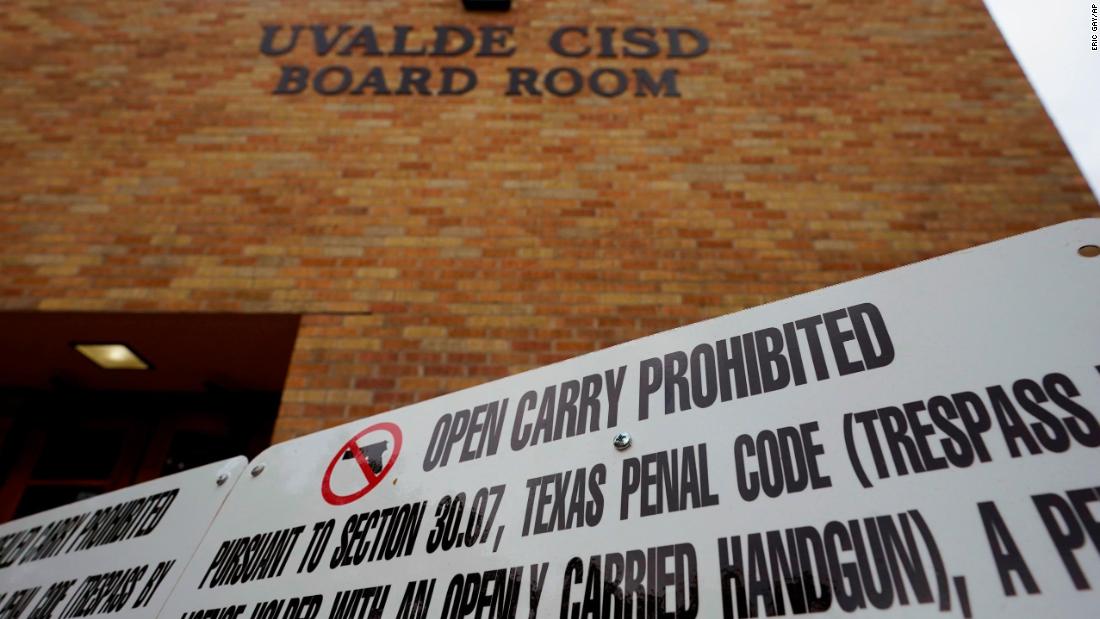 “We all know that they (police) messed up, we all know that this wasn’t handled right,” said Ryan Ramirez, father of Alithia Ramirez, who was one of the children killed. “Y’all can do whatever you want to try and make us happy, it’s not going to work. Y’all know what we want, accountability.”
The meeting came almost a month after a gunman opened fire inside a classroom, killing 19 children and two teachers. The community’s frustration stems from the police response to the shooting, the second-deadliest at a K-12 school in the United States.

As the public forum began, two people were holding up signs that said “Fire Pete Arrendondo” and “Enough is enough.”

Arrendo has faced scrutiny ever since the shooting. He has since refused to answer specific questions about the police response to the shooting.
He was, however, sworn in as a city council member a week after the shooting.
On Monday, there were more questions about the response after new images from surveillance footage in the halls of the school, both of which were obtained and reviewed by the Austin American-Statesman, appear to show responding officers had ballistic shields and rifles when they were inside the school.

In one conversation, early in the siege, according to the Statesman account, an officer says: “If there’s kids in there, we need to go in there.” Another responder, “Whoever is in charge will determine that.”

A transcript from the body camera footage from officers appears to show Arredondo was trying to get keys to open the classroom door, even though officials say they do not believe officers had tried to open the door, according to the Statesman.

The revelations of the last three weeks have not only left city residents livid, but it also brought into question whether Arredondo will be held accountable at all for his actions — or lack thereof — on that tragic day.

“How are we supposed to continue our lives here when the people that are supposed to protect us let down our families,” Ramirez said through tears. “Do us in favor and do what you know is right and make these people accountable for what happened.”

Brett Cross, a relative of victim Uziyah Garcia, said the board was failing its residents if it continues to keep Arredondo on staff.

“We were failed by Pete Arredondo. He failed our kids, teachers, parents and city, and by keeping him on your staff, y’all are continuing to fail us,” Cross said.

Others echoed the call for accountability.

“If nothing is done by this council to ensure the safety of our children, perhaps it is time for individuals who are willing to risk their lives for our children to fill their seats,” said parent Angeli Gomez.

A number of residents complained about the lax security at Robb Elementary.

“Our schools are built with the same concept of a motel. If I was able to jump a fence to seek access to my students so can an intruder,” said Gomez, who previously told CBS she ran inside to get her children during the elementary school shooting.

The open gates around elementary schools and the lack of adequate indoor space — like a gym — for the students to play also bothered the community.

On the day of the shooting “there were over 200-plus students — my son being one of them — playing outside at recess prior to the incident … visible to anyone driving by. That is a problem,” Gomez said.

Monica Saiz-Martinez, who works at Hillcrest Funeral Home across the street from Robb Elementary, said she called school officials on several occasions about a gate that remained open.

“There were many days in which I’d see the gate open to the school that led up to the teacher’s parking lot,” she said. “There were days that children played outside that gate was open.”

Javier Cazares, the father of victim Jacklyn Cazares, took it upon himself to print out and present the Uvalde CISD Preventative and Security Measures. The document lays out 21 items that comprise the school’s safety plan, one of which was that the district employs four officers — a chief, a detective and two officers.

“Is that really enough? We know now that it’s not,” Cazares said.

The relatives of victims did not hesitate to tell officials how the massacre has scarred them for life.

“The horrifying manner in which our mother was murdered and taken from us completely shattered our hearts, but made my dad’s stop,” said Lilliana Garcia, daughter of teacher Irma Garcia. Her father Joe, died of a heart attack two days after the shooting, but the family says he died of a broken heart.

“I need you all to understand the magnitude of this loss our family has to harden, that the story I’m telling you about my parents and the tragedy that happened to them is our reality. A horrific nightmare that we will never be able to awake up from,” Garcia said.

Cross said he had never been to a school board meeting because he never had a need to or couldn’t because of work. That ended May 24.

He explained how he and his wife took in Uziyah and his sisters to raise him as their own to “get him away from a toxic, malevolent situation.”

“We were giving him a life where he could be a child and worry about childhood things, where his biggest worry was if he was going to be able to play his video games after school,” Cross said. “He went from a D and F student to getting his very first A him on May 24. He was excelling academically for the first time in his short life.”

Ramirez asked officials through tears how he was supposed to move on after the death of his 10-year-old daughter.

“How are we supposed to continue our lives here when the people that are supposed to protect us let down our families?”