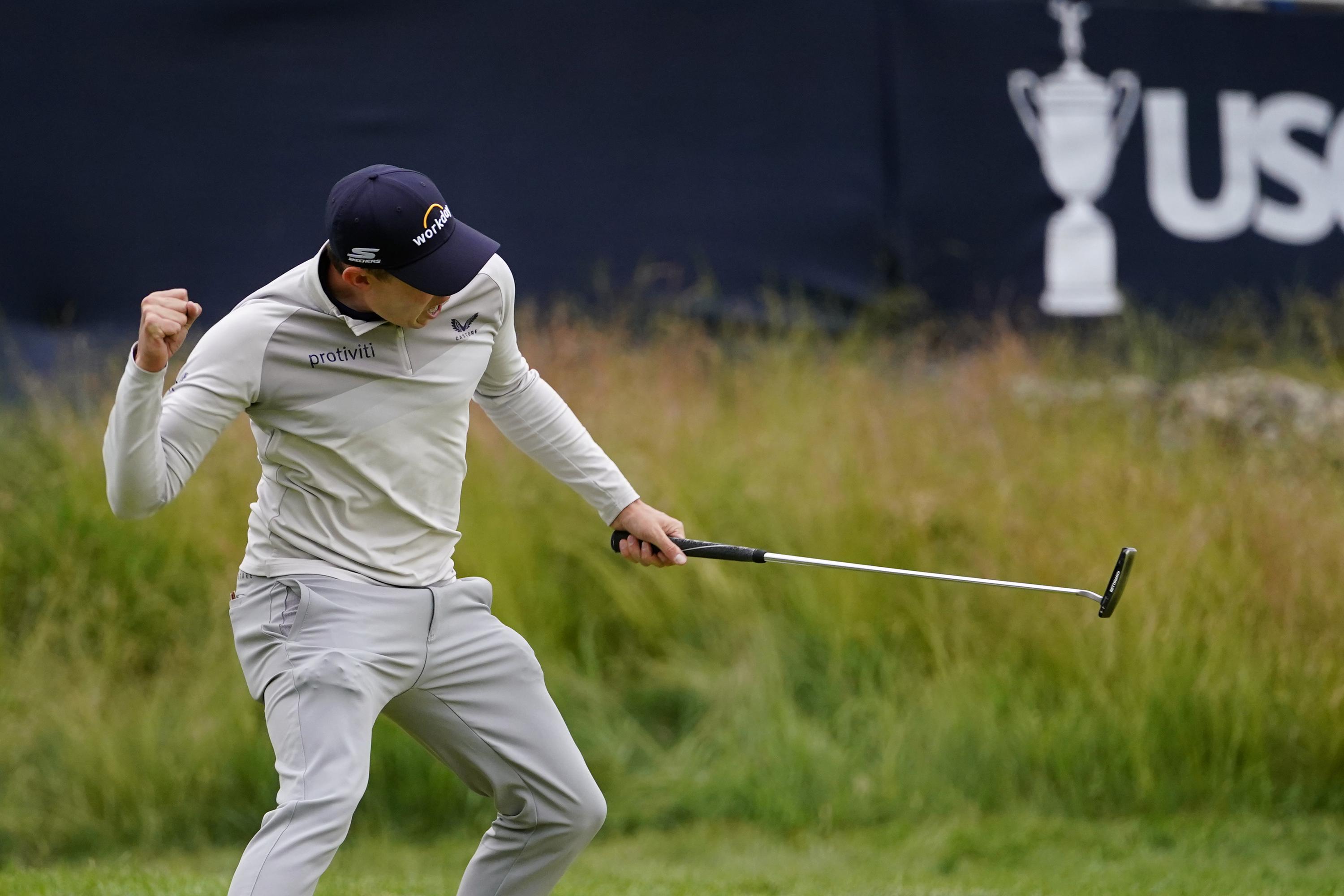 BROOKLINE, Mass. (AP) — The Latest on the US Open (all times local):

Englishman Matt Fitzpatrick won the US Open, winning his first major on the same course where he took the US Amateur title nine years earlier.

Fitzpatrick shot a 2-under 68 at The Country Club to finish the tournament at 6-under 274 and beat Will Zalatoris and Scottie Scheffler by one.

Leading by one shot, Fitzpatrick hooked his drive on No. 18 into a bunker to the left of the fairway. But he hit the middle of the green and two-putted from 18 feet for par. Zalatoris had a 14-foot birdie putt to tie, but he missed it by a fraction.

This marked the second straight runner-up finish at a major for Zalatoris, who lost to Justin Thomas in a playoff last month at the PGA Championship. It was Zalatoris’ sixth top-10 finish in seven majors since he made his major debut at Winged Foot in the 2020 US Open.

Fitzpatrick hit 17 greens in regulation. He becomes the first Englishman to win the US Open since Justin Rose at Merion in 2013, the same year Fitzpatrick won the US Amateur at The Country Club.

He also joins Jack Nicklaus as the only player to win both the US Open and Amateur on the same course. Nicklaus won at Pebble Beach in 1961 and 1972.

They headed to the 15th tee box at 5 under, one shot ahead of Masters champion Scottie Scheffler. Hideki Matsuyama, the 2021 Masters champ, was in the clubhouse at 3-under 277.

If there is a tie, there will be an aggregate two-hole playoff to decide the champion. The playoff holes are Nos. 1 and 18.

Still ahead for the three leaders is the famous par-4 17th hole, a 375-yard dogleg left that is playing as the easiest hole at The Country Club in the final round. That’s where Frances Ouimet made a birdie to force a playoff that gave him his historic win at the 1913 US Open. Justin Leonard sank a long putt there to clinch the Ryder Cup in 1991.

Zalatoris and Fitzpatrick are both seeking their first major after a close call last month at the PGA Championship. Fitzpatrick played in the final twosome on Sunday at Southern Hills, while Zalatoris lost to Justin Thomas in a playoff.

Matt Fitzpatrick made the turn with a one-shot lead over Will Zalatoris and Scottie Scheffler in what’s shaping up as a three-man race for the US Open title over the final nine holes.

Fitzpatrick birdied No. 8 and made par on No. 9 to turn at 6-under pair for the tournament. His birdie dele came about the same time as Scheffler made bogey on No. 10 to fall to 5 under.

Zalatoris made an 18-foot putt for birdie on No. 9 to join Scheffler at 5 under.

Scheffler already has four wins over the last four months and is hoping to add this major title to the Masters championship he won in April.

Zalatoris and Fitzpatrick, in the final group at The Country Club, are each going for their first major title. Last month at the PGA Championship, Fitzpatrick played in the final pairing, while Zalatoris lost to Justin Thomas in a playoff.

Top-ranked Scottie Scheffler made four birdies over the front nine to make the turn with a one-shot lead in the closing round of the US Open.

The Masters champion made the turn in 4-under 31 and was at 6 under for the tournament with nine holes left. That was one shot ahead of Matt Fitzpatrick and two clear of Will Zalatoris, who were paired in the day’s final twosome.

Scheffler is trying to become the first player to win the Masters and US Open in the same season since Jordan Spieth in 2015.

Scheffler’s lead looked in jeopardy when his approach shot into the heavily sloped green on the par-5 eighth spun backward off the green, almost back to his feet around 65 yards from the hole. But he got up and down to save par, then made another pair on 9 to turn at 6-under.

Go back to late Friday afternoon to find Denny McCarthy needing par on the final hole to make the cut in the US Open. And look at him now. McCarthy had a 68 in the third round, started Sunday with three birdies in five holes and is in a tie for fourth.

He’s become the most unlikely contender on a leaderboard filled with stars.

Scottie Scheffler and Matt Fitzpatrick are setting the pace. Scheffler had three birdies in four holes to give the Masters champion the lead. Fitzpatrick has been steady as always and made birdie on No. 3 to tie Scheffler to 5 under.

Jon Rahm has all pars through four holes and is two behind. Rory McIlroy is up and down, three birdies and two bogeys and is three back.

World No. 1 Scottie Scheffler birdied the first two holes of the final round in the US Open to move into a tie for the lead.

Scheffler started the day at 2 under and two holes later he had matched Will Zalatoris and Matt Fitzpatrick at minus-4. The overnight co-leaders teed off at 2:45, so the entire field has started the final round at The Country Club.

Scheffler made a six-foot putt for birdie on No. 1 and a 15-footer on the second hole. He’s the reigning Masters champion, looking for his second career major victory.

The governing body says the front-left hole location on No. 17 at The Country Club is in the same place as it was when Francis Ouimet made a birdie in the final round of the 1913 tournament to force a playoff against British pros Harry Vardon and Ted Ray.

And the front-right 18th hole is where it was on Sunday for the 1988 US Open, when Curtis Strange made par from the front bunker to force a Monday playoff with Nick Faldo.

On Saturday, the 17th pin was in the same place it was when Justin Leonard made a 45-foot birdie to clinch the Ryder cup for the United States in 1999.

The par-3 11th hole is also getting some attention: It’s playing at just 119 yards. That didn’t make it any easier. It was playing as the eighth-hardest in the early going, with 10 bogeys and just three birdies in the first 26 players.

Guido Migliozzi is off to a good start in the final round at The Country Club.

The Italian finished tied for fourth last year in his US Open debut. He was 3 under through 14 holes on Sunday as he tried to overcome a 74 in the third round that dropped him to plus-6 through 54 holes.

Second-round co-leader Collin Morikawa picked up a birdie on the fourth hole and was at 1 over for the tournament. He is trying to recover from a third-round 77 that dropped him off the leaderboard.

Grayson Murray is getting a lot of TV time at the US Open — for all the wrong reasons.

Murray tossed his putter after a quadruple bogey on the seventh hole at The Country Club. Then he snapped an iron over his knee on No. 10.

The 28-year-old from North Carolina missed the cut in his only other US Open, in 2013. But playing on the weekend is apparently no reason for him to celebrate.

Murray needed four tries to get out of the rough behind the seventh hole on Sunday and then threw his putter into the high fescue as he left the green. After a pair on No. 8, he made a triple on the ninth hole.

When he missed the green with his approach on the ninth hole and snapped the club over his knee.

Murray was plus-9 for the fourth round and 17 over for the tournament. That left him tied with Harris English for last place.

The idea of ​​a firm and fiery final round of the US Open has been doused.

Rain and temperatures began falling overnight at The Country Club, leaving weather that makes the US Open feel like a dreamy day at the Pebble Beach Pro-Am.

There hasn’t been enough accumulation of rain to soften the course. But the forecast was for cloud cover and temperatures barely reaching 60 degrees when Will Zalatoris and Matt Fitzpatrick tee off in the final group.

Rain or shine, this US Open should be wide open. Defending champion Jon Rahm is one shot behind. Masters champion Scottie Scheffler is another shot back, as is New England favorite and former PGA champion Keegan Bradley.

Also very much in the mix is ​​Rory McIlroy, who turned a tough Saturday into a 73 that kept the four-time major champion within three shots of the lead.