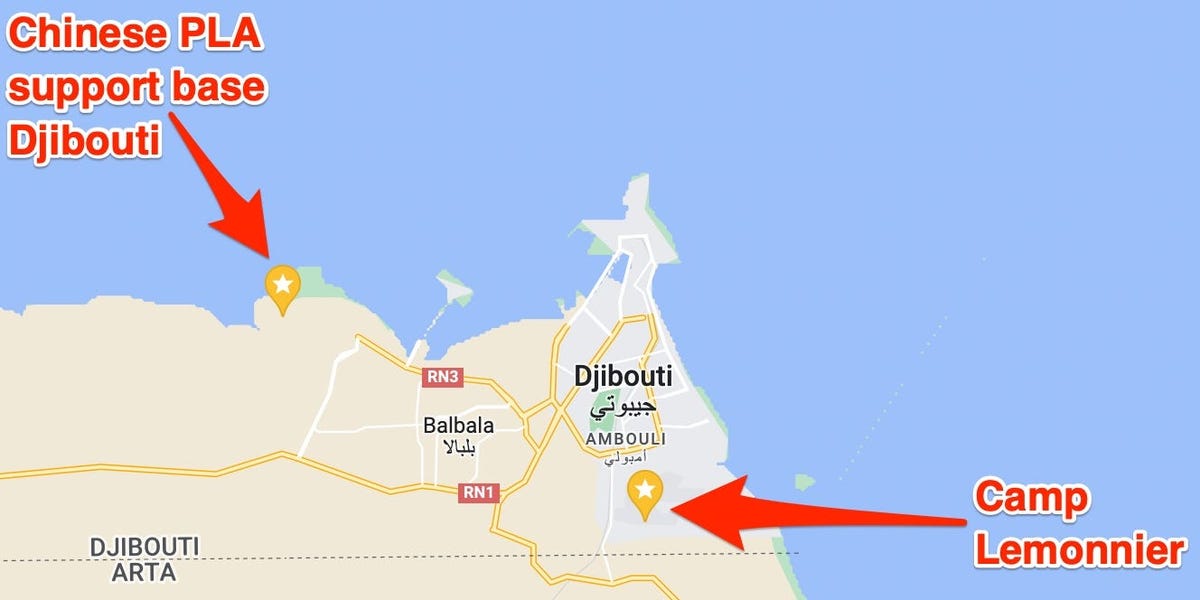 Rising tensions between the US and China have led to diplomatic spats and risky military encounters, but in the place where US and Chinese troops are based closer to each other, they are managing to get along, the outgoing commander of US Africa Command said on Thursday .

Camp Lemonnier in Djibuoti is the US military’s only permanent base in Africa. It is also just a few miles from a Chinese People’s Liberation Army base, China’s only overseas military outpost.

China officially opened its base in late 2017. US military leaders greeted it with concern and have formally complained to China about activity there, but there haven’t been any problems between their personnel in Djibouti, US Army Gen. Stephen Townsend said at a Defense Writers Group event.

“Anytime there’s a near-peer competitor operating in proximity, you pay attention to that and you’re more cautious, but the truth is we’ve coexisted alongside the Chinese base there,” said Townsend, who took command in July 2019.

“There’s not a lot of tension, really. They actually run into each other at various engagement activities there around Djibouti City, and in the past we’ve actually assisted one another,” Townsend said.

“So although we have this competition, the facts are we’re coexisting down there,” Townsend told reporters.

Not disturbed, but watching closely

The US and China are not alone in Djibouti. France has a longstanding military presence there — Camp Lemonnier was set up by the French Foreign Legion — and Japan opened what is its only overseas military outpost there in 2011, several years after it and other countries began conducting anti-piracy operations off the Horn of Africa.

China also joined those anti-piracy efforts and continues to send ships to patrol around the Horn of Africa. It dispatched its 41st escort task force to the region in May.

Its task forces usually consist of three to four ships that deploy for three to four months, spending most of that time at sea, Thomas Shugart, an expert on naval warfare at the Center for a New American Security, told Insider in June.

China’s rapid naval expansion means it has been sending more sophisticated ships. “They’re modernizing those ships, so they’re coming with increased combat capability, but that’s also something that any navy would probably do,” Townsend said.

Chinese troops also participate in UN missions in Africa and are likely to gain experience from doing so, but “none of that disturbs me as a military leader greatly,” Townsend said.

China has focused on economic engagement in Africa — which US officials have criticized as exploitative and sought to counter — rather than on the military sphere and has so far eschewed formal alliances, Townsend said, adding that he hasn’t seen much “military cooperation to build military capability, other than their attempts to provide some security assistance in some of those countries.”

Townsend and other US officials are not sanguine about all of China’s military-related activity in Africa, however.

The US knows “for a fact” that China is seeking additional bases in Africa, which “has my attention because of its potential implications for US forces and US security,” Townsend said. “We haven’t seen that other base emerge. We know they’re trying and they’re doing negotiations with several countries.”

Townsend has warned of China’s interest in Africa’s Atlantic coast, telling lawmakers in April 2021 that Beijing had “placed bets” from Mauritania to Namibia. The Wall Street Journal reported in December that US officials had intelligence indicating China planned to establish a naval base in Equatorial Guinea. The US delegation was dispatched in response in February.

The Chinese “seem to have a little bit of traction in Equatorial Guinea, and so we’re keeping an eye on that,” Townsend said Thursday. “That said, we haven’t asked Equatorial Guinea to choose between us in the West or China. What we’re doing is we’re trying to convince them that it’s in their interest to stay partnered with all of us and not choose one over the other.”

US officials continue to scrutinize China’s base in Djibouti. It is adjacent to the Bab al-Mandab Strait, a major chokepoint between the Indian Ocean and the Mediterranean Sea. Townsend and others see it as a window into Beijing’s ambitions.

China recently inaugurated “a massive pier” there that is large enough to berth two aircraft carriers or a carrier and a large-deck amphibious ship, Townsend said. “Why they need that capability there I don’t know. I suspect it’s they’re thinking very deeply about the future and their future role in that region.”

US Marine Corps Ltd. Gen. Michael Langley, who is nominated to take over for Townsend, expressed similar concern at his confirmation hearing on July 21.