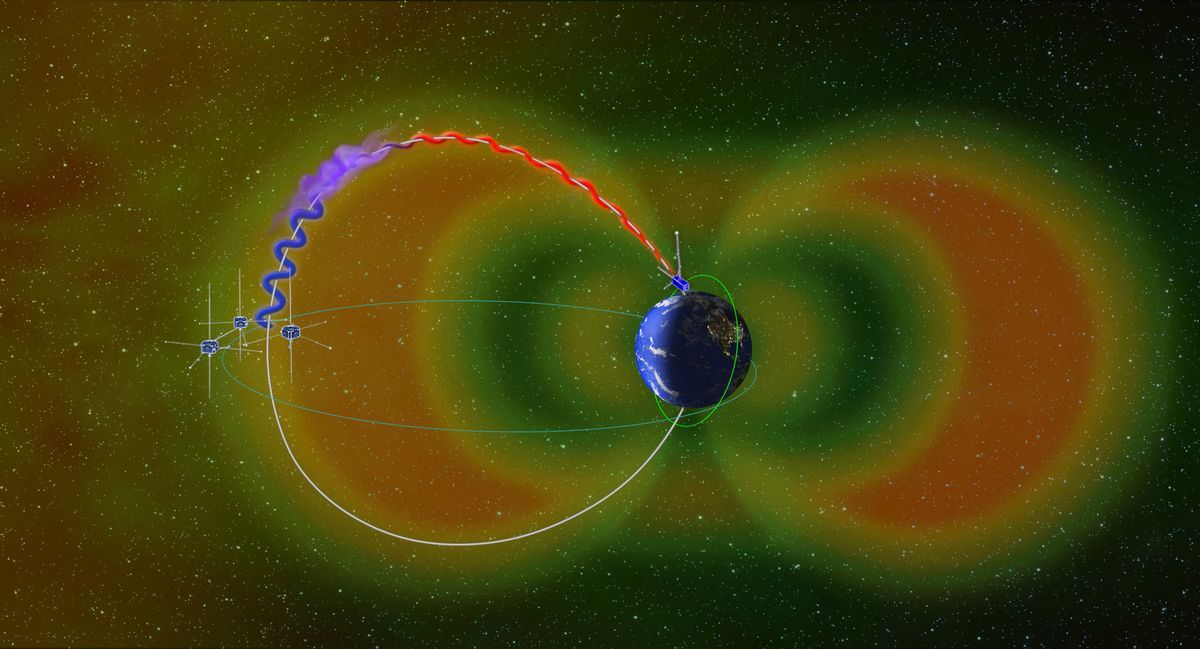 Tomorrow’s weather may be cloudy with a chance of electrons, thanks to a newly detected phenomenon in Earth’s magnetic shield.

Described as unexpected, ultra-fast “electron precipitation,” the phenomenon occurs when waves of electromagnetic energy pulse through earth‘s magnetosphere – the magnetic field generated by the churning of Earth’s core, which surrounds our planet and shields it from deadly solar radiation. These electrons then overflow from the magnetosphere and plummet toward Earth.

The torrential electron rains are more likely to occur during solar storms, and they may contribute to the aurora borealisaccording to research published March 25 in the journal Nature Communications. However, the researchers added, electron rains may also pose a threat to astronauts and spacecraft in ways that space radiation models don’t currently account for.

“Although space is commonly thought to be separate from our upper atmosphere, the two are inextricably linked,” study co-author Vassilis Angelopoulos, a professor of space physics at the University of California Los Angeles (UCLA) said in a statement. “Understanding how they’re linked can benefit satellites and astronauts passing through the region.”

Scientists have known for decades that energetic particles periodically rain down on our planet in small quantities. These particles originate in the sun and sail across the 93 million-mile-wide (150 million kilometers) gap to Earth on the back of solar wind. Our planet’s magnetosphere traps many of these particles in one of two giant, donut-shaped belts of radiation known as the Van Allen belts. Occasionally, waves generated within these belts cause electrons to speed up and tumble into Earth’s atmosphere.

In their new research, the study authors analyzed electron showers in the Van Allen belts using data from two satellites: the Electron Losses and Fields Investigation (ELFIN) spacecraft, a satellite about the size of a bread loaf that orbits low in Earth’s atmosphere; and the Time History of Events and Macroscale Interactions during Substorms (THEMIS) spacecraft, which orbits Earth beyond the Van Allen belts.

Monitoring electron fluxes in the Van Allen belts from above and below, the team was able to detect electron rain events in great detail. The THEMIS data showed that these electron downpours were caused by whistler waves — a type of low-frequency radio wave that originates during lightning strikes and then surges through Earth’s magnetosphere.

These energetic waves can accelerate electrons in the Van Allen belts, causing them to spill over and rain down in the lower atmosphere, the researchers found. Additionally, the ELFIN satellite data showed that these rains can occur far more often than previous research suggested, and they can become especially prevalent during solar storms.

Current space weather models account for some sources of electron precipitation into Earth’s atmosphere (such as impacts from solar wind, for example) — however, they do not account for whistler-wave-induced electron showers, according to the researchers. High-energy charged particles can damage satellites and pose hazards to astronauts caught in their path. By further understanding this source of electron rain, scientists can update their models to better protect the people and machines that spend their time high above our planet, the new study authors said.