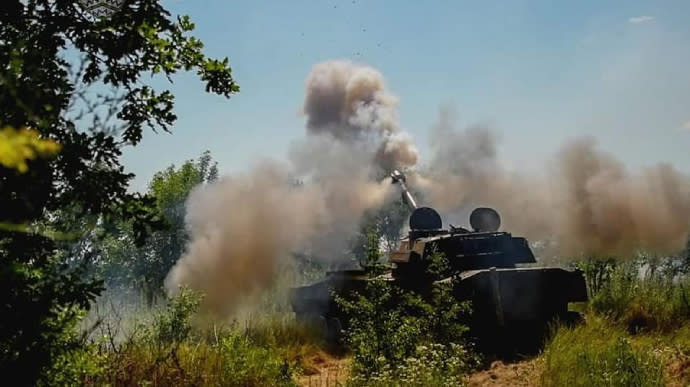 Russian occupying forces have established control over the village of Zolotarivka [there are two villages called Zolotarivka, one in Donetsk Oblast and one in Luhansk Oblast; the General Staff does not specify which one was captured by the Russians – ed.]. They forced the crossing over the Siverskyi Donets river and attempted to capture Bilohorivka [an urban-type settlement in the Sievierodonetsk district of Luhansk Oblast – ed.]. The Armed Forces of Ukraine repelled a Russian assault in the direction of Pasika – Dolyna.

Source: General Staff of the Armed Forces of Ukraine on Facebook, information as of 18:00 on 3 July

Details: On the sloviansk front, Russian occupying forces used artillery to fire on the areas around Dolyna, Kurulka, Bohorodychne, Adamivka and Husarivka. Units of Ukrainian troops repelled a Russian assault in the direction of Pasika – Dolyna.

Russian forces forced the crossing over the Siverskyi Donets river on the Kramatorsk front, and are attempting to build on their success and establish control over Bilohorivka. They continued to fire on the units of Ukrainian troops in the area in order to pin them down. In addition, they used artillery to fire on the area in the vicinity of Hryhorivka and Bilohorivka.

on the Lysychansk front, Russian troops used tubed artillery to fire on the areas around Zolotarivka and and Verkhnokamianka. They conducted an assault on Zolotarivka and were able to capture it.

on the Avdiivka, Kurakhove, Novopavlivka and Zaporizhzhia fronts, Russian forces fired on the areas around Avdiivka, Pisky, Novomykhailivka, Vremivka, Huliaipole and Charivne in order to pin down the Ukrainian units on these fronts. Russian aircraft conducted airstrikes near Kamianka, Avdiivka and Shevchenko.

on the Pivdennyi Buh front, Russian forces are focusing on preventing the advance of Ukrainian Defense Forces along the routes where they are likely to mount an offensive. The Russians are ensuring their troops can receive the necessary supplies and are performing combat engineering tasks to reinforce their positions.

on the Sivershchyna frontRussian occupying forces used mortars and artillery to fire on the areas around the towns of Bachivsk and Vovkivka in Sumy Oblast, near the Ukrainian-Russian border.

Russia’s main efforts on the Kharkiv front are focused on preventing the advance of Ukrainian troops towards the state border of Ukraine. Russian forces fired artillery on the areas around Zolochiv, Khrestyshche, Malynivka, Cherkaska Lozova and Chepil.

The General Staff reports no significant changes in the positions or activities of the Belarusian Armed Forces on the Volyn and Polissia fronts.

Russian occupying forces continued to conduct missile strikes on military and civilian infrastructure on the Mykolaiv front in order to impede the offensive capabilities of the Ukrainian forces in the area.