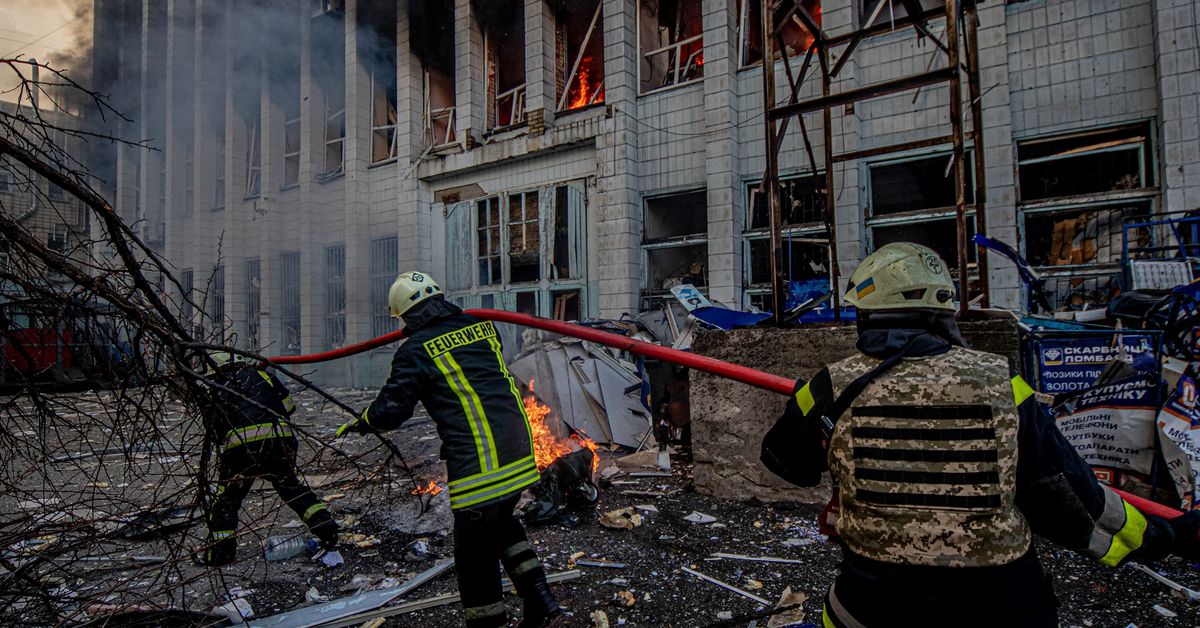 LVIV/KYIV, Ukraine, March 23 (Reuters) – Talks between Ukraine and Russia are confrontational but moving forward, President Volodymyr Zelenskiy said on Wednesday, as the West plans to announce more sanctions against the Kremlin amid a worsening humanitarian crisis.

Intense Russian air strikes are turning besieged Mariupol into the “ashes of a dead land”, the city council said on Tuesday, as street fighting and bombardments raged in the port city.

Hundreds of thousands are believed to be trapped inside buildings, with no access to food, water, power or heat. Both civilians and Ukrainian troops were coming under Russian fire, said regional governor Pavlo Kyrylenko.

Russian forces and Russian-backed separatist units had taken about half of the port city, normally home to around 400,000 people, Russia’s RIA news agency said, citing a separatist leader.

But in an early morning address, Zelenskiy held out hope for negotiations, which have yielded little since the Feb. 24 invasion began.

“It’s very difficult, sometimes confrontational,” he said. “But step by step we are moving forward.”

Russian President Vladimir Putin’s incursion into Ukraine has forced more than 3.5 million to flee, brought about the unprecedented isolation of Russia’s economy, and raised fears of wider conflict in the West unthought-of for decades.

Mariupol has become the focus of the war that erupted when Putin sent his troops over the border on what he calls a “special military operation” to demilitarize Ukraine and replace its pro-Western leadership.

The port city lies on the Sea of ​​Azov and its capture would allow Russia to link areas in the east held by pro-Russian separatists with the Crimean peninsula, annexed by Moscow in 2014.

Western nations plan to heap more pressure on the Kremlin.

Alongside European leaders, US President Joe Biden is expected to announce new sanctions against Russia and new measures to tighten existing ones when he visits Brussels this week.

The United States is preparing sanctions on more than 300 members of Russia’s lower house of parliament as soon as Thursday, according to The Wall Street Journal, which cited unnamed officials and internal documents. The White House did not immediately comment.

Biden’s Europe trip is also set to include an announcement on joint action to enhance energy security on the continent, which is highly reliant on Russian gas, and a visit to Poland to show solidarity with Ukraine’s neighbour.

Having failed to seize the capital Kyiv or any other major city with a swift offensive, Russia is waging a war of attrition that has reduced some urban areas to rubble and prompted Western concern that the conflict could escalate, even to a nuclear war.

Russia’s security policy dictates that the country would only use such weapons if its very existence were threatened, Kremlin spokesman Dmitry Peskov told CNN.

“If it is an existential threat for our country, then it (the nuclear arsenal) can be used in accordance with our concept,” he said.

Earlier he said “no one” had ever thought the operation in Ukraine would take just a couple of days and the campaign was going to plan, TASS news agency reported.

Western officials said Russian forces were stalled around Kyiv but making some progress in the south and east. Ukrainian fighters are repelling Russian troops in some places but cannot roll them back, they said.

Russia’s combat power in Ukraine has declined below 90% of its pre-invasion levels, a senior US defense official said on Tuesday, without providing evidence. If confirmed, it would suggest heavy losses of weaponry and growing casualties. read more

The United Nations human rights office in Geneva said on Tuesday it had recorded 953 civilian deaths and 1,557 injured since the invasion. The Kremlin denies targeting civilians.

Millions have fled abroad, according to the United Nations, leaving Eastern Europe scrambling to provide them with care, schools and jobs. read more

The United States plans to launch an effort this week to make it easier for some to enter after only a handful of refugees were admitted in the first two weeks of March, according to three people familiar with the matter. read more

Deputy Prime Minister Iryna Vereshchuk, speaking on Ukrainian television on Tuesday, said at least 100,000 people wanted to leave Mariupol but could not.

A Reuters team that reached a Russian-seized part of the city on Sunday described a wasteland of charred apartment blocks and bodies wrapped in blankets lying by a road. read more

Ukraine says Russian shells, bombs and missiles have struck a theatre, an art school and other public buildings, burying hundreds of women and children sheltering in cellars.

Kyiv accused Moscow of deporting residents of Mariupol and separatist-held areas of Ukraine to Russia. This includes the “forcible transfer” of 2,389 children to Russia from the Luhansk and Donetsk regions, Prosecutor General Iryna Venediktova said.

Moscow denies forcing people to leave, saying it is taking in refugees.

Russia did not immediately comment on the situation in Kherson.

Zelenskiy warned the crisis in Ukraine, one of the world’s biggest grain exporters, would bring famine elsewhere.

“How can we sow (crops) under the strikes of Russian artillery?” he told Italian lawmakers. read more