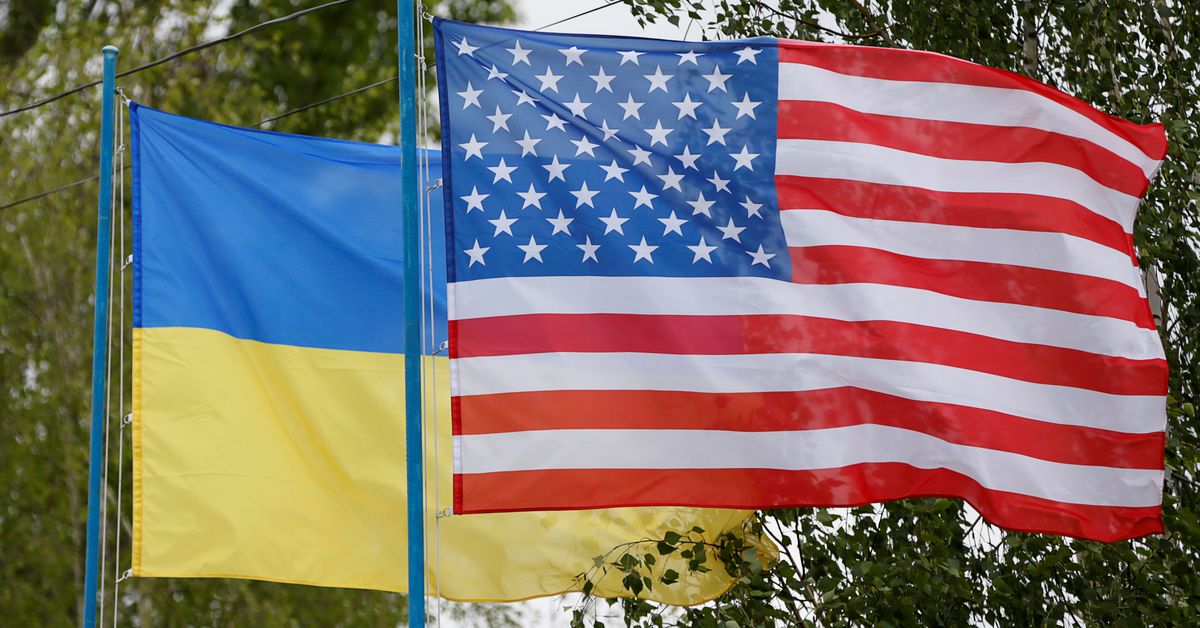 National flags of Ukraine and the US fly at a compound of a police training base outside Kiev, Ukraine, May 6, 2016. Picture taken May 6, 2016. REUTERS/Valentyn Ogirenko

Aug 8 (Reuters) – The United States will send an additional $5.5 billion in aid to Ukraine, made up of $4.5 billion in budgetary support and $1 billion in military assistance, to help it come to grips with the turmoil of this year’s Russian invasion.

The $4.5 billion budgetary grant will fund urgent government needs including payments for pensions, social welfare and healthcare costs, bringing total US fiscal aid for Ukraine to $8.5 billion since Russia’s February invasion, the US Agency for International Development said.

The funding3, coordinated with the US Treasury Department through the World Bank, will go to the Ukraine government in tranches, beginning with a $ billion disbursement in August, USAID said.

It follows previous transfers of $1.7 billion in July and $1.3 billion in June, USAID said. Washington has also provided billions of dollars in military and security support.

It includes as many as 50 M113 armored medical transports and munitions for the US-supplied HIMARS long range rocket launchers and for the NASAMS surface-to-air missile system. read more

The fiscal and military aid packages – both first reported by Reuters on Monday – are drawn from a $40 billion aid package for Ukraine approved by Congress in May. read more

Overall, the United States has contributed more than $18 billion to Ukraine this year.

The new budgetary funds are to help the government maintain essential functions, including social and financial assistance for the growing poor population, children with disabilities, and millions of internally displaced persons, as the war drags on.

Ukrainian officials estimate the country faces a $5 billion-a-month fiscal shortfall – or 2.5% of pre-war gross domestic product – due to the cost of the war and declining tax revenues. Economists say that will swell Ukraine’s annual deficit to 25% of GDP, compared with 3.5% before the conflict.

The World Bank estimates that 55% of Ukrainians will be living in poverty by the end of 2023 as a result of the war and the large numbers of displaced persons, compared with 2.5% before the start of the war.

USAID said US budget support has enabled the Ukrainian government to keep gas and electricity flowing to hospitals, schools and other critical infrastructure and deliver urgently needed humanitarian supplies to citizens.

The funds have also paid for healthcare workers, teachers and other civil servants.

USAID said robust safeguards had been put in place by the World Bank, along with USAID-funded, third-party watchdogs embedded within the Ukrainian government to make sure the funds are directed where they are meant to go.

“This economic assistance is critical in supporting the Ukrainian people as they defend their democracy against Russia’s unprovoked war of aggression,” US Treasury Secretary Janet Yellen said in a statement.

The injection of fresh cash for Ukraine comes as the war, which Russia calls “a special military operation,” stretches into a sixth month, with millions of displaced Ukrainians and authorities warning of likely gas shortages in winter.

National security correspondent focusing on the Pentagon in Washington DC Reports on US military activity and operations throughout the world and the impact they have. Has reported from over two dozen countries to include Iraq, Afghanistan, and much of the Middle East, Asia and Europe. From Karachi, Pakistan.