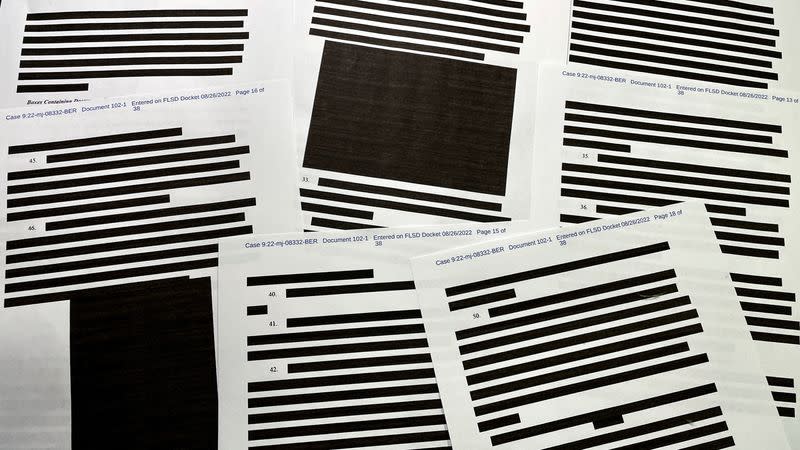 WEST PALM BEACH, Fla. (Reuters) -Former President Donald Trump’s legal team will square off against the US Justice Department in federal court on Thursday, in a bid to convince a judge to appoint a special master to review the materials the FBI seized from Trump’s Florida estate.

The hearing comes less than two days after prosecutors laid out fresh details about their ongoing criminal investigation into whether Trump illegally retained government records and sought to obstruct the government’s probe by concealing some of them from the FBI.

Trump’s attorneys in a filing late on Wednesday downplayed the government’s concerns about the discovery of classified material inside his home, and accused over the Justice Department of escalating the situation even after he boxes of the National Archives and allowed FBI agents in June to “come to his home and provide security advice.”

“Simply put, the notion that Presidential records would contain sensitive information should have never been

cause for alarm,” his lawyers wrote.

A special master is an independent third party sometimes appointed by a court in sensitive cases to review materials potentially covered by attorney-client privilege to ensure investigators do not improperly view them.

On Thursday morning, Trump’s newest attorney – former Florida Solicitor General Christopher Kise – added his name to the case, in a possible sign he could be handling arguments before the court.

In Trump’s initial request to the court, his attorneys claimed that the former president wanted to protect materials that were subject to a legal doctrine known as executive privilege, which can shield some presidential communications.

Trump’s legal team later narrowed its request by asking for a privilege review without explicitly referring to executive privilege – after many legal experts criticized the argument as illogical.

The Justice Department on Tuesday also echoed those sentiments.

Trump “has no property interest in any presidential records(including classified records) seized from the premises,” prosecutors told the court on Tuesday, noting that a former president cannot assert executive privilege against the executive branch itself.

Prosecutors also said the department’s filter team, a group of agents who are not part of the investigation, had already reviewed the materials, and determined only a limited number may be covered by attorney-client privilege.

US District Judge Aileen Cannon, a Trump appointee in the Southern District of Florida, will preside over Thursday’s hearing.

She previously indicated she was leaning toward appointing a special master, but that position could potentially change after the Justice Department laid out its evidence and arguments late on Tuesday.

In their filing, prosecutors revealed that Trump’s records custodian, whom they did not name, falsely certified that a thorough search had been conducted and all government records had been returned to the government.

The certification was made on June 3, when three FBI agents and a top Justice Department traveled official following the obligation of a grand jury subpoena to retrieve all remaining records.

During that visit, prosecutors said Trump’s lawyers never claimed he had declassified any of the materials, and they handed over 38 pages marked as classified inside a double-taped envelope.

However, his attorney at the same time also prohibited government investigators from opening or looking inside some of the boxes that Trump kept inside one of his storage rooms, they said.

The department ultimately decided to seek court approval for a search warrant, after the FBI developed evidence of possible obstruction.

“The government developed evidence that a search limited to the storage room would not have uncovered all the classified documents at the premises,” prosecutors said.

The FBI ultimately searched Trump’s home on Aug. 8, and recovered more than 33 boxes and other items, including more than 100 pages marked as classified.

Some of the items are so sensitive, prosecutors said on Tuesday, that certain FBI and department personnel required additional clearances before they could review the materials.

They also revealed that FBI agents during their search located some classified documents in Trump’s desk drawers, co-mingled with his passports.

“The location of the passports is relevant evidence in an investigation of unauthorized retention and mishandling of national defense information,” the department said.

Although the Justice Department’s filing on Tuesday contained the most detail to date about its investigation, it also filed separately other records under seal at Cannon’s request – including a more detailed list of property the FBI seized from Trump’s home.

Media outlets on Wednesday filed a motion asking those judge to unseal records as well.