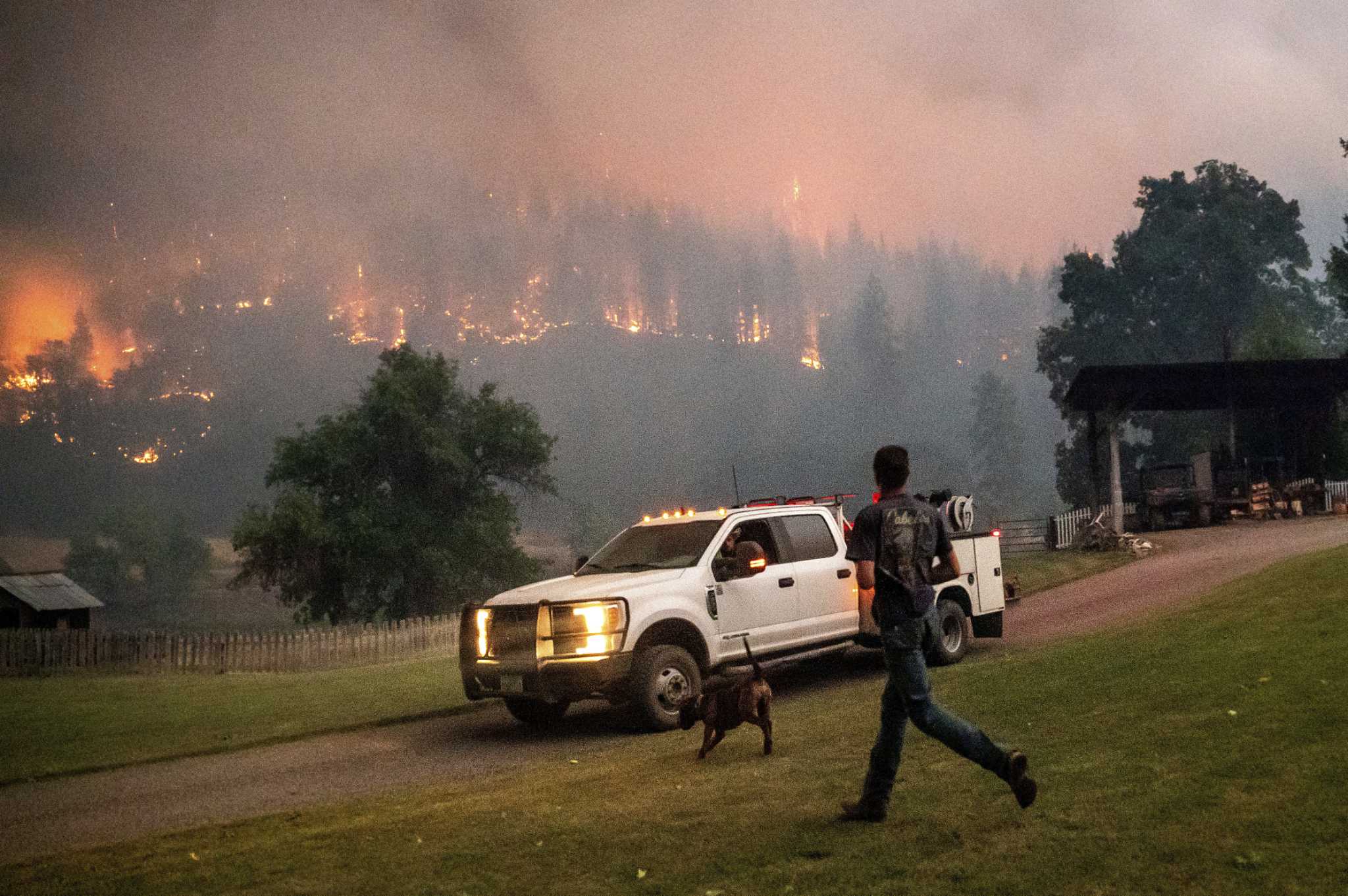 McKinney Fire updates: Get info on the McKinney Fire from the US Forest Service.
information line: 530-643-0279
evacuations: Get the latest info from ZoneHaven. An evacuation center is open at the Weed Community Center.
wildfire cameras: Livestreaming from AlertWildfire.

UPDATE: Monday August 1, 6:13 am Two people were found dead in a vehicle that was burned in the path of the McKinney Fire on Sunday, the Siskiyou County Sheriff’s Office reports. Fire personnel found the bodies at approximately 9:57 am in a residential driveway along Doggett Creek Road, which is off of Highway 96, west of the community of Klamath River, California. No other details are available immediately.

A raging wildfire along the California-Oregon border is now forcing evacuations in Yreka as high temperatures and punishing winds continue to stoke the blaze. The McKinney Fire in Siskiyou County has blackened 51,468 acres, according to the US Forest Service’s latest update Sunday morning. After clawing up to 1% containment on Saturday, crews are now back down to no containment.

“Yreka Police Department has issued an Evacuation Order for the area west of Fairchild Street and Shasta Street to include Oakridge Mobile Estates,” the Forest Service announced Saturday evening. “This area is being evacuated due to proximity to the fire and the need for additional time necessary for this group of residents to safely evacuate. Residents in the Evacuation Order area should evacuate immediately.

Weather conditions are not favorable for fire crews. On Sunday, they’re expecting single-digit humidity, lightning, blazing temperatures and gusting winds, which “will continue to be the drivers for the extreme fire behavior.” The red flag conditions “can be extremely dangerous for firefighters, as winds can be erratic and extremely strong, causing fire to spread in any direction,” the Forest Service said Sunday. “New lightning fires are still being detected, including one overnight at the top of Doggett Creek north of the main fire.”

“Crews were actively engaged in structure protection overnight, especially in the Klamath River area. Little progression was observed on the fire’s edge closest to Yreka City,” it continued. “Priorities for today are to continue structure preparation and protection in the Highway 96 corridor, and around the communities of Fort Jones and Yreka City.”

Over the next day, they’re projecting “fire growth … to spread in all directions as Red Flag Warning for thunderstorms and lightning are in the forecast. Fire could impact Gottville, Humbug Road area on the east flank. Movement towards Scott Bar is expected as the fire moves off Collins Baldy.”

The McKinney Fire broke out on Friday in the Klamath National Forest, about 15 miles south of the Oregon border, sending out a massive pyrocumulus cloud and triggering a flurry of evacuations in small forestland communities in the northern most part of the Golden State. The McKinney Fire was reported at 300 acres on Friday night with no containment, and exploded overnight, reaching 18,000 acres by Saturday morning, the US Forest Service said.

Crazy footage of firefighters escorting residents out of the McKinney fire last night. The fire pushed hard into the evening. Today, due to visibility, tankers have been amused to the nearby China 2 fire. 🙏to a subscriber for this footage #mcKinneyfire #cali #fire #California pic.twitter.com/SDUQzncztM

“Because of the erratic winds the fire is going all over the place,” Caroline Quintanilla, a public information officer with the US Forest Service, told SFGATE on Saturday afternoon.

The blaze started at 2:38 pm in the Oak Knoll Ranger District west of the Walker Creek Bridge on the south side of the Klamath River, the US Forest Service said. Thunderstorms passed over the region Friday night and may have exacerbated the blaze.”We had 100 lightning strikes in western Siskiyou County last night,” said Brad Schaaf, a meteorologist with the National Weather Service office in Medford, Ore.

This is a carousel. Use Next and Previous buttons to navigate

Schaaf said the fire put out at 39,000-foot-tall pyrocumulus cloud at 11:30 pm Friday. “It’s unusual for a fire to put out a fire cloud of that size late at night because usually fires stabilize after sunset,” he said.

Pyrocumulus clouds, also known as fire clouds, form when air heats up and moves upward, pushing smoke, ash and vapor up with it. They are a sign that fire activity on the ground is increasing.

The #McKinneyFire is once again exploding this morning after growing to the size of the #OakFire (18,000+ acres) in under 18 hours.

Multiple roads were closed due to the blaze including Highway 96, Scott River Road, Highway 96 and Highway 263, the Siskiyou Office of Emergency Services said.

Two other smaller fires were reported near the McKinney Fire, the China Peak Fire and the Evans Peak Fire. The Klamath National Forest said at 11 am on Saturday that the China Fire had combined with the Evans Fire and was about 300 to 350 acres and 2 to 3 miles west of the town of Seiad Valley.