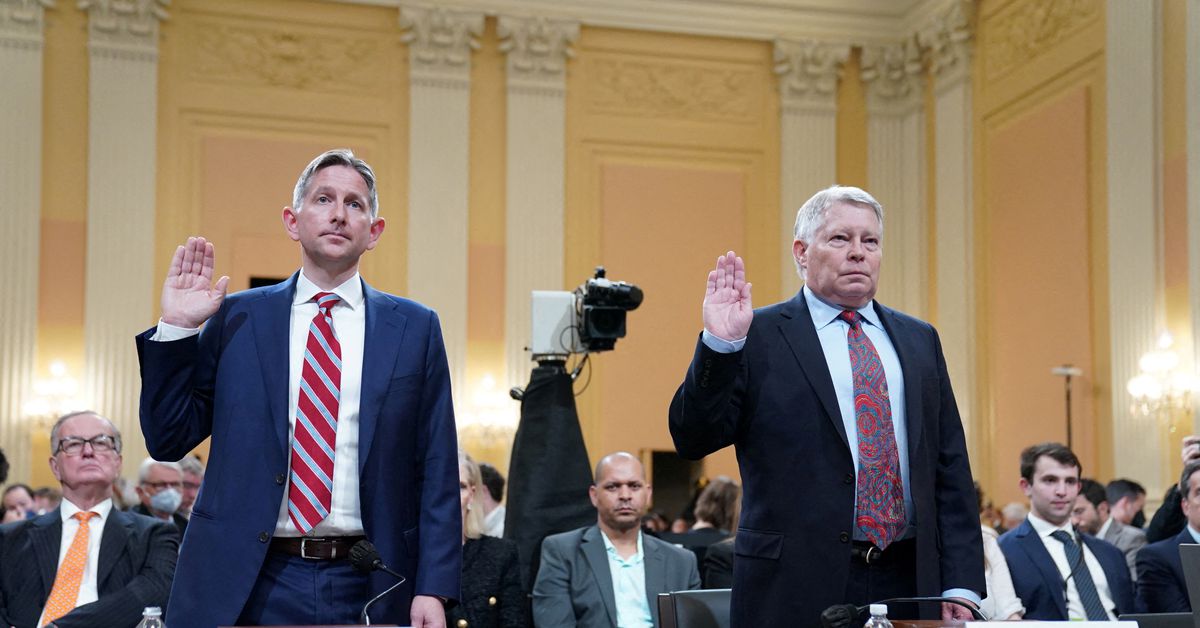 WASHINGTON, June 16 (Reuters) – Former President Donald Trump pressured his vice president, Mike Pence, to overturn his 2020 election defeat despite being repeatedly told Pence had no authority to do so, aides to Pence told the congressional committee investigating the Jan. 6, 2021 attack on the US Capitol on Thursday.

Members of the Democratic-led House of Representatives select committee said Trump continued his pressure campaign even though he knew a violent mob of his supporters was threatening the Capitol as Pence and lawmakers met to formally certify President Joe Biden’s victory in the November 2020 election.

The nine-member committee has used the first three of at least six public hearings expected this month to build a case that Trump’s efforts to overturn his defeat amounted to illegal conduct, far beyond normal politics.

“Mike Pence said no. He resisted the pressure. He knew it was illegal. He knew it was wrong,” Democratic Representative Bennie Thompson, the committee’s chairperson, said. “That courage put him in tremendous danger.”

Trump has repeatedly denied wrongdoing, while repeating his false accusations that he lost the election only because of widespread fraud that benefited the Democrat Biden. He and his supporters of him—including many Republican members of Congress—dismiss the Jan. 6 panel as a political witchhunt.

Marc Short, who was Pence’s chief of staff, said in videotaped testimony that Pence told Trump “many times” that he did not have the authority to stop the vote certification in Congress as the Republican president sought.

Gregory Jacob, Pence’s counsel, said the main proponent of that theory, outside lawyer John Eastman, admitted in front of Trump two days before the attack that his plan to have Pence halt the procedure would violate the law.

Trump’s Accountability for the Jan. 6 riot is “incidental to his responsibility and accountability for his attempt to steal the 2020 presidential election from the American people,” retired US Appeals Court Judge J. Michael Luttig told the committee.

“It is breathtaking that these arguments even were conceived, let alone entertained by the President of the United States at that perilous moment in history,” Luttig, who was an informal adviser to Pence, said.

The committee played chilling video showing some of the Trump supporters in the crowds of thousands of people who descended on the Capitol baying for Pence to be pulled out of the building, or hanged.

Michael Luttig, advisor to former US Vice President Mike Pence and a former US federal judge and Greg Jacob, former counsel to Pence, are sworn in to testify during the third of eight planned public hearings of the US House Select Committee to investigate the January 6 Attack on the United States Capitol, on Capitol Hill in Washington, US June 16, 2022. REUTERS/Sarah Silbiger

“You’ll also hear that the president knew there was a violent mob at the Capitol when he tweeted at 2:24 pm that the Vice President did not have the quote, ‘courage’ to do what needed to be done,” said Democratic Representative Pete Aguilar, a committee leading questioning of the witnesses.

The certification on Jan. 6 had become a focus for Trump, who saw it as a last-ditch chance to retain the presidency despite his loss of him at the polls. His supporters flocked to Washington to rally with the Republican president, who had made repeated false claims that the election was stolen through widespread voting fraud. They stormed the Capitol, attacked police and sent Pence and lawmakers fleeing for their safety.

Pence did not follow Trump’s instructions to scrap the

The hearing also examined the emergence of a plan advocated by Trump associates including attorney John Eastman that Pence could unilaterally reject certified electors from certain states where results had been challenged. Pence refused to accept that theory.

Thomas’ involvement in conservative politics and reported ties to people involved with Trump’s challenge to the election outcome have raised questions about whether her husband should refuse himself from Supreme Court decisions related to such matters.

Pence said in February that Trump, under whom he served as vice president for four years, was wrong to believe that Pence had the power to reverse the election’s outcome.

“I had no right to overturn the election,” Pence told an audience in Florida. The committee played a video of him saying so during his first public hearing on Thursday night.

The attack on the Capitol delayed certification of the election for hours, injured more than 140 police officers and led to several deaths. More than 840 people have been arrested and charged so far.

The onslaught marked the only time in US history that power was not passed peacefully from one president to another.