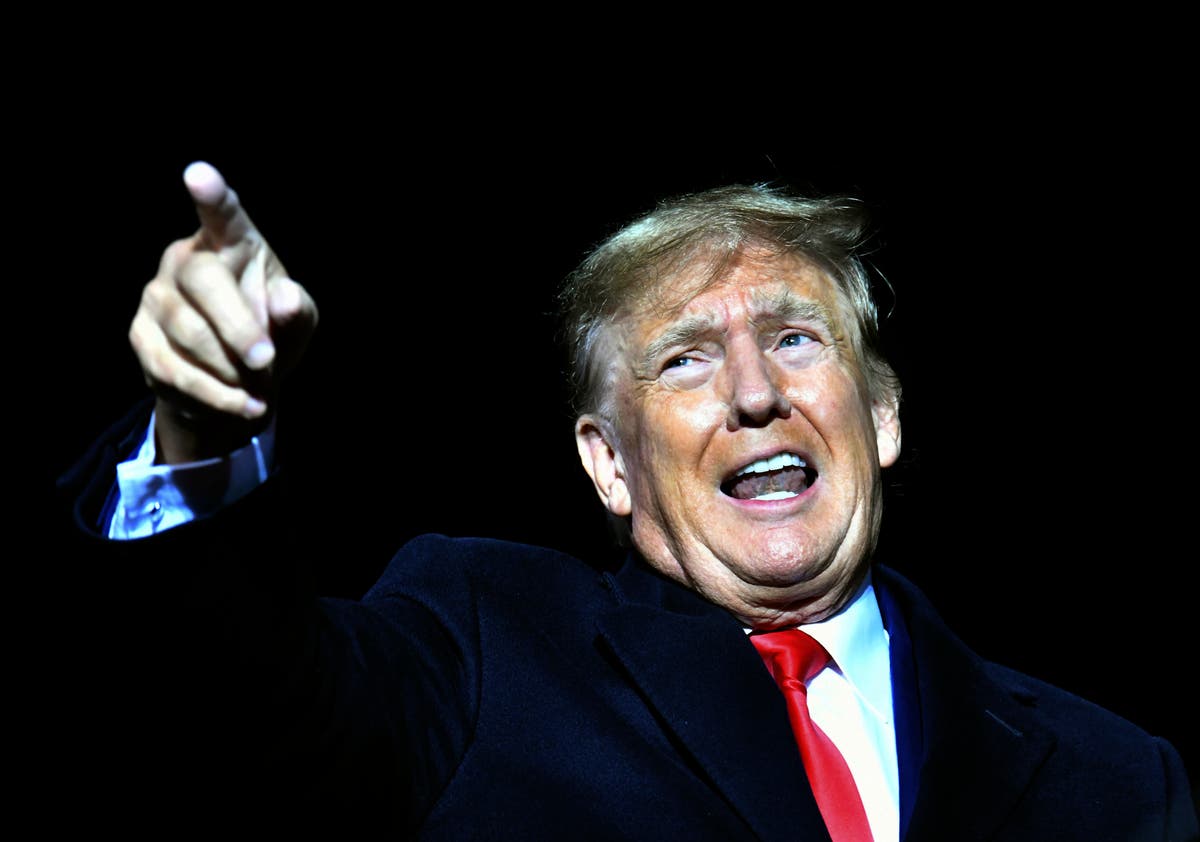 Trump calls for Putin to release dirt on the Biden family

Donald Trump’s son-in-law and former White House adviser Jared Kushner has appeared virtually before the House select committee investigating the January 6 Capitol riot. His testimony is said to have been “really valuable”.

The meeting with the White House records turned over to the committee by the National Archives and Records Administration did not include any calls made or received by Mr Trump between the hours of 11.17am and 6.54pm on the day of the storming of Congress.

The panel is now probing whether Mr Trump or his advisers used untraceable “burner phones” to evade official record-keeping systems which documented the president’s inbound and outbound phone calls that day. Mr Trump denied doing so in a statement in which he claimed to have “no idea what a burner phone is” and has never used the term. However, law suits filed on his behalf and a statement by former national security adviser John Bolton indicate otherwise.

“What kind of American, let alone an ex-president, thinks that this is the right time to enter into a scheme with Vladimir Putin and brag about his connections to Vladimir Putin? There is only one, and it’s Donald Trump,” White House Communications Director Kate Bedingfield told reporters on Wednesday.

Committee chairman Bennie Thompson told ABC News Mr Kushner is of interest “because he was an integral part of the administration. It’s, I think, important for us to find out if he knew anything about the planning before January 6, and to get it from him.”

The committee has no evidence that he was involved in the planning for the events of 6 January 2021 and has not sought to obtain his email or phone records, Mr Thompson further told reporters.

ICYMI: Trump hits out at Morning Joe hosts over condemnation for Putin favor

Donald Trump once again launched an attack on an all-too-familiar target for the former president: Joe Scarborough and Mika Brzezinski, the husband and wife duo who co-host MSNBC’s popular morning joe program alongside Willy Geist — this time about their reporting about his request to Vladimir Putin.

Bombshell reporting from CBS News and The Washington Post published this week revealed that a mysterious gap exists in the Trump White House call logs from the day of the Captiol riot on 6 January 2021.

While rioters attempted to sack the US Capitol, chanted “hang Mike Pence”, and delayed the certification of Joe Biden’s victory, Donald Trump was holed up in the White House with his staff. We now know that several top officials, including chief of staff Mark Meadows, were fielding calls and texts from desperate lawmakers on Capitol Hill who were insistent that the president needed to call off his supporters before the violence got worse.

There is no mention of that in the White House call logs, however, which contain more than seven-hour gaps during the riot where no calls were recorded. The logs are not a complete picture of the communications that White House officials, including the president, had during the riot, given their use of personal cell phones, but the logs are still a point of interest for the House select committee investigating the Capitol riot .

Attorneys for former president Donald Trump used the term “burner phones” — a slang term used to describe an untraceable mobile phone which he has denied knowing — in a September 2021 civil lawsuit, according to court documents.

A federal judge struck down portions of a Florida election law passed last year, saying in a ruling Thursday that the Republican-led government was using subtle tactics to suppress Black voters.

The law tightened rules on mailed ballots, drop boxes and other popular election methods — changes that made it more difficult for Black voters who, overall, have more socioeconomic disadvantages than white voters, US District Judge Mark Walker wrote in his ruling.

A lot is known about the few hours that shook American democracy to the core. The defeated president’s incendiary speech, the march by an angry crowd to the US Capitol, the breaking in, the beating of cops, the “hang Mike Pence” threats, the lawmakers running for their lives, the shooting death of rioter Ashli ​​Babbitt. All of that chaos unfolded over about eight hours on one day: Jan 6, 2021.

But for all that is known about the day, piecing together the words and actions of Donald Trump over that time has proven no easy task, even though the president’s movements and communications are closely monitored.

There’s a gap in the official White House phone notations given to the House committee investigating Jan 6 — from about 11am to about 7pm, according to two people familiar with the congressional investigation into the riot. But over the past four-plus months a lot has surfaced about what Trump did and say on Jan 6 — in texts, tweets, videos, calls and other conversations.

Former Texas Republican Congressman Will Hurd has written that some of his GOP colleagues were fearful of visiting the US border and some towns in Mexico as they expected an environment similar to a warzone.

In his new book, American Reboot: An Idealist’s Guide to Getting Things Done, Mr Hurd writes that “to correct misconceptions about the border, I brought congressional colleagues and administration officials down for tours of the border. Some were nervous when I took them into Mexico. Many were expecting the Battle of Mogadishu in 1993, with shootouts in the streets like Black Hawk Down”.

Donald Trump’s son-in-law and former White House adviser Jared Kushner has testified virtually before the House select committee investigating the events of January 6 2021 leading up to and during the violent assault on the US Capitol.

Representative Elaine Luria said in an appearance on MSNBC this afternoon: “He was able to voluntarily provide information to us to verify, substantiate, provide his own take on this different reporting, so it was really valuable.”