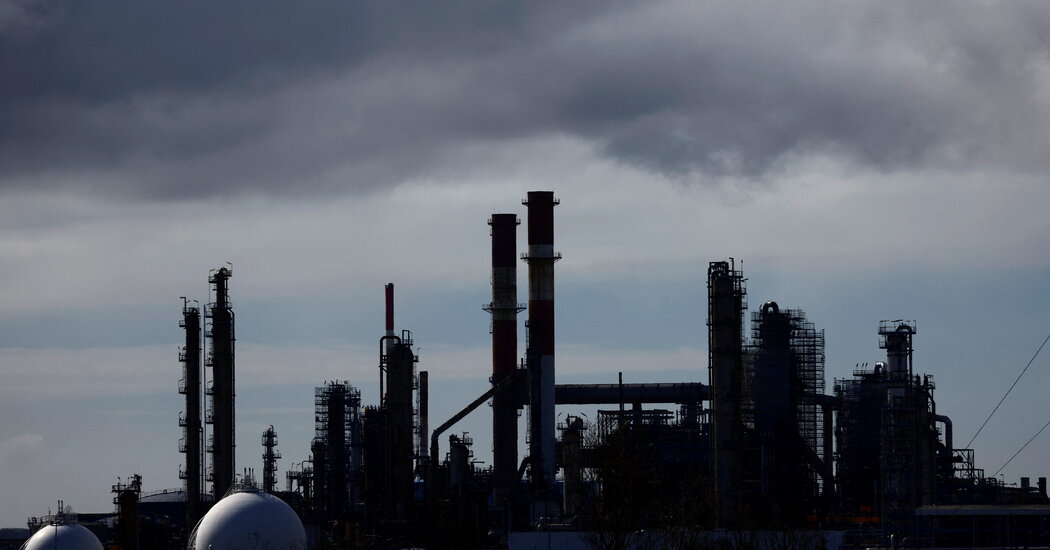 TotalEnergies, the French oil and gas company, said on Tuesday that it would stop buying Russian oil by the end of the year and halt further investment in projects in the country.

At the same time, the company warned of the risks and potential negative consequences — for itself and Europe — of a headlong flight from Russia in the wake of Moscow’s invasion of Ukraine.

The Paris-based company said it had “initiated the gradual suspension of its activities in Russia, while assuring its teams’ safety.” TotalEnergies had said on March 1 that it would halt new Russian investment.

Tuesday’s announcement expanded on that initial statement, describing how the company would no longer enter or renew contracts to purchase Russian oil and petroleum products, and saying that it would halt all such purchases by the end of this year. TotalEnergies also said it would stop providing capital for new projects in Russia, including a large planned liquefied natural gas installation called Arctic LNG 2.

The energy company’s actions since the invasion illustrates the challenges for European businesses and policymakers. Europe is dependent on energy from Russia, which is one of the world’s largest suppliers of oil and gas.

TotalEnergies itself is in a difficult position. The company said in its statement on Tuesday that it had been accused of “complicity crimes” for continuing to work in Russia. At the same time, its Russian business, especially liquefied natural gas investments, has been an important part of the company’s future strategy and something it has been reluctant to completely renounce.

TotalEnergies “is far more entrenched” in Russia than rivals like BP and Shell, which have made commitments to completely extricate themselves, said Biraj Borkhataria, an analyst at RBC Capital Markets, an investment bank.

Buying energy from Russia is also an established practice that will be difficult to abandon. TotalEnergies appears to have been one of the largest buyers of shiploads of Russian crude in 2021, averaging 186,000 barrels a day, according to data from Kpler, a research firm.

TotalEnergies has contracts to import Russian oil that comes by pipeline to its Leuna refinery in eastern Germany. The company said that it would terminate these deals by the end of 2022 and substitute supplies brought through Poland.

But the company warned that such moves could have an impact on the availability of an ingredient for diesel fuel that is already in short supply globally.

The company said it was continuing to supply liquefied natural gas to Europe through a facility that it owns in part called Yamal LNG, as long as governments “consider that Russian gas is necessary.”

The company noted a dilemma that complicated efforts to liquidate its holdings. Russian law, it said, barred it from selling its various minority interests to non-Russian buyers.

“Abandoning these interests without consideration would enrich Russian investors, in contradiction with the sanctions’ purpose,” TotalEnergies said.