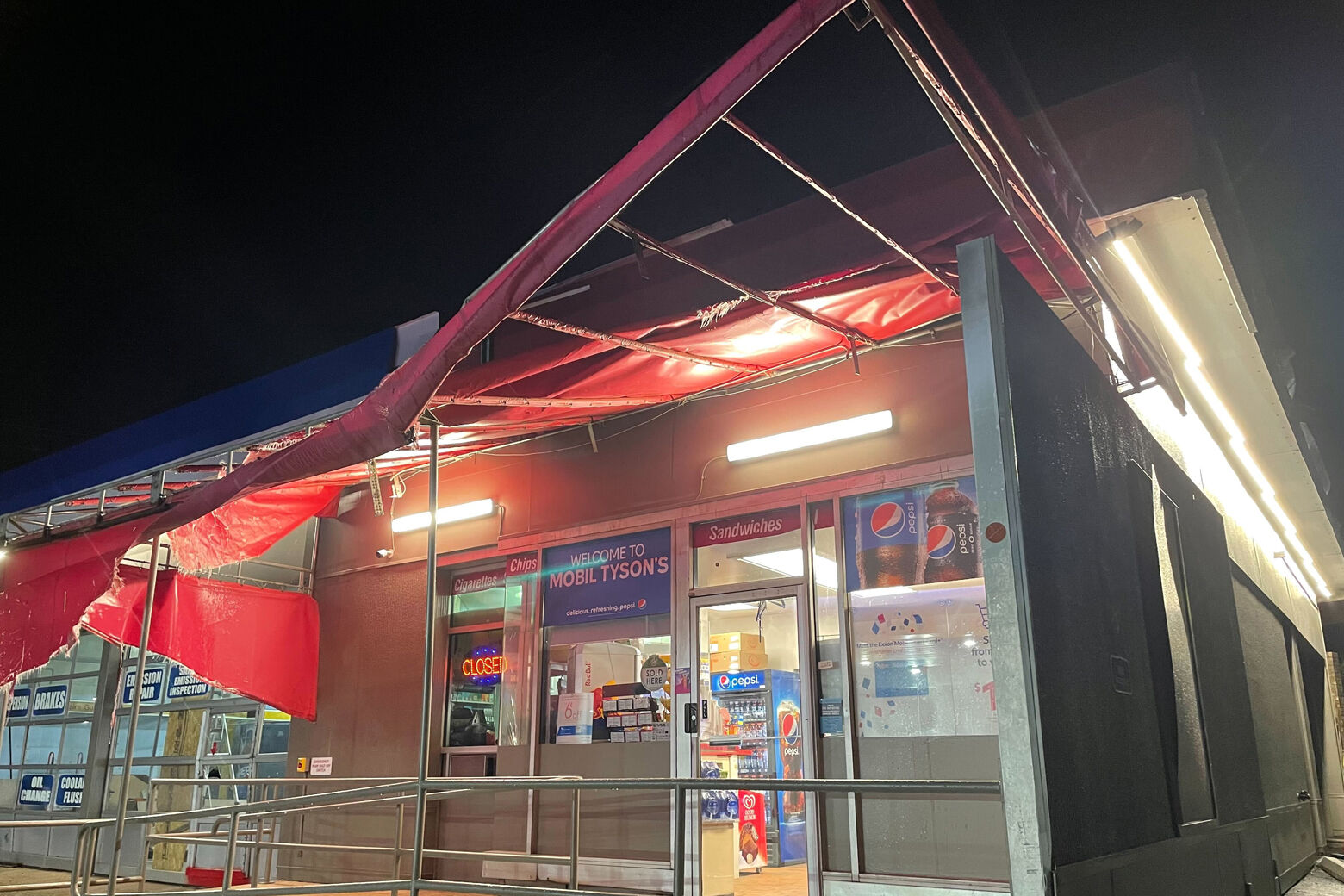 The National Weather Service’s Sterling office confirmed that a twister touched down along Chain Bridge Road, just northwest of Tysons Corner Mall, for about a minute late Thursday evening — enough to damage a pair of gas stations and send loose items airborne.

A damage assessment team estimated its peak winds at 85 mph, rating it an EF-0 — the lowest of six tiers on the Enhanced Fujita Scale, which measures Tornadic Intensity. Their analysis found the tornado traveled for about 150 yards, or 450 feet, before the thunderstorm weakened.

Surveyors determined a funnel touched down at 8:41 pm on the southeast corner of the intersection of Chain Bridge Road and International Drive, collapsing part of a Sunoco gas station’s canopy.

Flying objects struck a Mobil station about 120 feet east of the Sunoco, shattering windows, shearing off metal panels and mangling an entryway canopy beyond repair. The garage door at the Mobil was also blown 10 to 15 feet away from the station.

Video shared on twitter showed powerful winds lofting debris into the air near the Macy’s at the western end of the mall. Meteorologists said the footage, along with other eyewitness accounts, were clear evidence of rotation within the storm cell.

“Eyewitness accounts along with a social media report show the tornado as the Mobil gas station and was approximately 10 yards away with clear rotation in the video as it just northwest of Tysons Corner Mall just off of Tysons One Place,” the passed weather service’s report said.

“Based off of lack of damage displayed further southeast, the tornado likely dissipated in the Tyson`s Corner Mall parking lot.”

THE Tornado Warning for the McLean, Oakton and Fair Oaks areas from 8:22 pm to 8:45 pm noted radar-indicated rotation with the storm that affected Tysons.

Parts of northern DC and Maryland’s Montgomery County later fell under a Tornado Warning from the same cell, but no Tornadic Damage was reported.

Get breaking news and daily headlines delivered to your email inbox by signing up here.

© 2022 WTOP. All Rights Reserved. This website is not intended for users located within the European Economic Area.