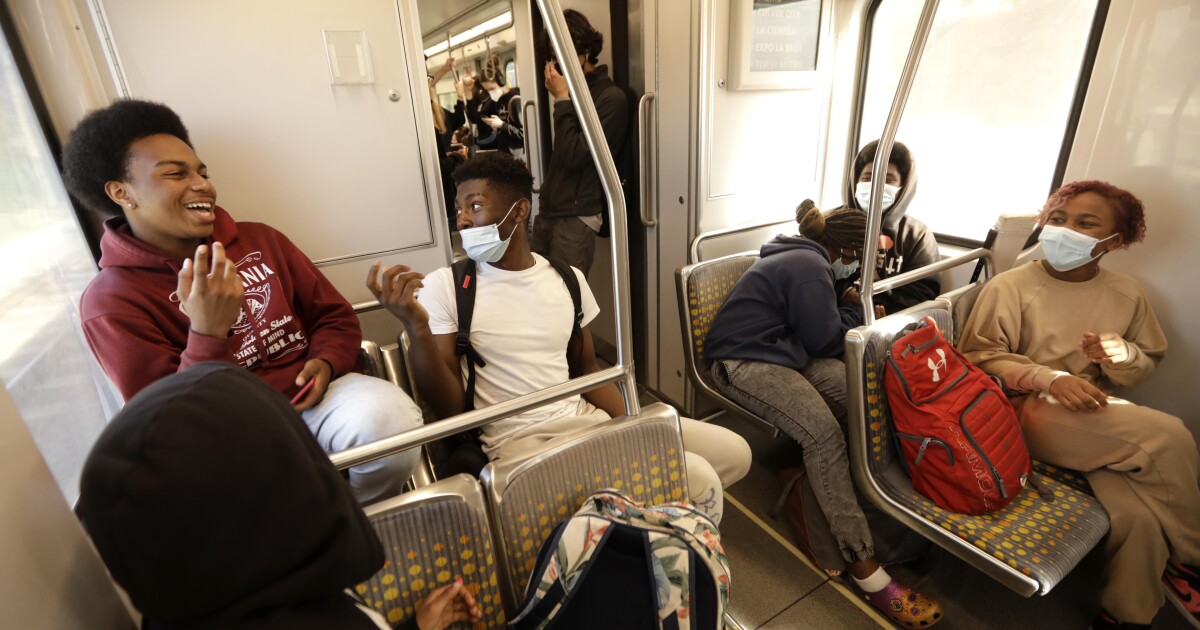 In the last two years, COVID-19 has followed a predictable, if painful, pattern: When coronavirus transmission has rebounded, California has been flooded with new cases and hospitals have strained under a deluge of seriously ill patients, a distressing number of whom die .

But in a world awash in vaccines and treatments, and with healthcare providers armed with knowledge gleaned over the course of the pandemic, the latest wave is not sticking to that script.

Despite wide circulation of the coronavirus — the latest peak is the third-highest of the pandemic — the impact on hospitals has been relatively minor. Even with the uptick in transmission, COVID-19 deaths have remained fairly low and stable.

And this has occurred with officials largely eschewing new restrictions and mandates.

In some ways, that’s what is supposed to happen: As health experts get better at identifying the coronavirus, vaccinating against it and treating the symptoms, new surges in cases shouldn’t lead to excessive jumps in serious illnesses.

But today’s environment is not necessarily tomorrow’s baseline. The coronavirus can mutate rapidly, potentially upending the public health landscape and meriting a different response.

“The one thing that is predictable about COVID, in my mind, is that it’s unpredictable,” said UCLA epidemiologist Dr. Robert Kim-Farley.

While it’s too soon to say for certain, there are signs the current wave is starting to recede. Over the weeklong period ending Thursday, California reported an average of just over 13,400 new cases per day — down from the latest spike’s high point of nearly 16,700 daily cases, according to data compiled by The Times.

By comparison, last summer’s Delta appears topped out at almost 14,400 new cases per day, on average.

And more than 8,300 coronavirus-positive patients were hospitalized statewide on some days at the height of Delta — almost three times as many as during the most recent wave.

The difference in each surge’s impact on intensive care units has been even starker. During Delta, there were days with more than 2,000 coronavirus-positive patients in statewide ICUs. In the latest wave, however, that daily census has so far topped out at around 300.

That gap in hospitalizations illustrates how the pandemic has changed.

“At the very beginning of the pandemic, we noted right away the game-changers were going to be vaccines, easy access to testing and therapeutics — and now we have all those things,” said Los Angeles County Public Health Director Barbara Ferrer.

And though hospitalizations have been lower, in the aggregate, during the latest wave, Ferrer noted that each infection still carries its own dangers — not just severe illness, but the chance of long COVID, as well. Taking individual action to protect yourself, she said, carries the added benefit of helping to safeguard those around you, including those at higher risk of serious symptoms or who work jobs that regularly bring them into contact with lots of people.

“For me, it makes clear that layering in some protection is still the way to go while enjoying just about everything you want to enjoy,” she said.

California’s most restrictive efforts to rein in the coronavirus ended almost exactly a year ago, when the state celebrated its economic reopening by scrapping virtually all restrictions that had long provided the backbone of its pandemic response.

Roughly a month later, with the then-novel Delta variant on the rampage, some parts of the state reinstituted mask mandates in hopes of blunting transmission.

Toward the end of the year, another new foe would arise: the Omicron variant. This highly transmissible strain brought an unprecedented viral spread, sending case counts and hospitalizations soaring and prompting officials to reissue a statewide mask mandate for indoor public spaces.

The fury with which those two surges left struck some fearing, and others advocating for, the return of the stringent orders that restricted peoples’ movements and shut down broad swaths of the economy. However, both waves came and went without California officials resorting to that option.

And during this latest wave — fueled by an alphanumeric soup of Omicron subvariants, including BA.2 and BA.2.12.1 — such aggressive action seems off the table.

During both Delta and the initial Omicron surge, California “carefully evaluated the unique characteristics of each variant to determine how to best handle the changes in the behavior of the virus, and used the lessons of the last two years to approach mitigation and adaptation measures through effective and timely strategies,” according to the state Department of Public Health.

“These lessons and experiences informed our approach to manage each surge and variant. In addition, there were more tools available for disease control during each subsequent surge, including the Delta and Omicron surges,” the department wrote in response to an inquiry from The Times. “So, rather than using the same mitigation strategies that had been used previously, CDPH focused on vaccines, masks, tests, quarantine, improving ventilation and new therapeutics.”

The state has also eschewed its previous practice of setting specific thresholds to tighten or loosen restrictions in favor of what it calls the “SMARTER” plan — which focuses on preparedness and applying lessons learned to better armor California against future surges or new variants.

“Each arises and each variant brings with it unique characteristics relative to our neighborhoods’ and communities’ specific conditions,” the Department of Public Health said in its statement to The Times.

Chief among those, the department added, are getting vaccinated and boosted when eligible and properly wearing high-quality face masks when warranted.

The US Centers for Disease Control and Prevention recommends public indoor masking in counties that have a high COVID-19 community level, the worst on the agency’s three-tier scale. That category indicates not only significant community transmission but also that hospital systems may grow strained by coronavirus-positive patients.

“We certainly are not at a level at these numbers where you would say, ‘OK, it’s now, quote, endemic, and we just go about business as usual,’ ” Kim-Farley said. “I think, though, it is probably indicative of what we might see in the future going forward, that we will see low levels in the community, people can relax and let their guard down a bit. But there will then be other times when we might see surges coming in. … That’s a time when we mask up again. So I think there may be some on and off a little bit, and hopefully these surges become fewer, more spread out and less intense as we go forward.”

Ferrer has said Los Angeles County would do the same should it fall in the high COVID-19 community level for two consecutive weeks.

LA County, like the state as a whole, continues to strongly recommend residents wear masks indoors in public. But Ferrer might be acknowledged that “it’s a very tough needle to thread” and said an unintended consequence of years of health orders people don’t grasp the urgency of a recommendation.

“People are now assuming if we don’t issue orders and require safety measures then it’s because it’s not essential, and that’s not what we meant,” she said. “We have always benefited from having folks who are able to listen, ask questions and then, for the most part, align with the safety measures. And I think because it’s been such a long duration, because there’s so much fatigue at this point and desperation in some senses to get back to customary practices, people are waiting for that order before they go ahead and take that sensible precaution.”