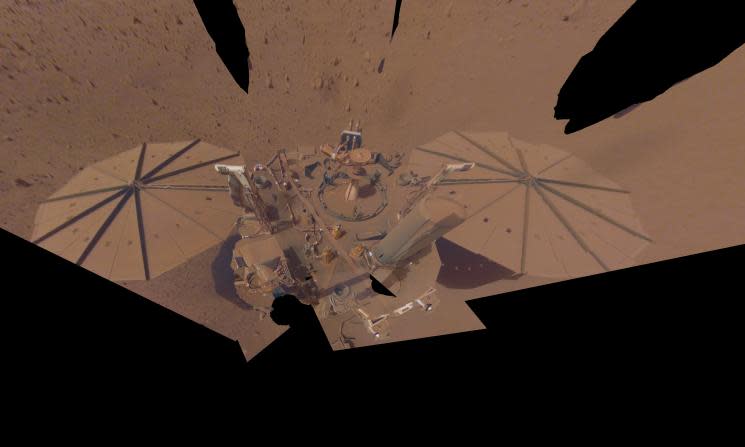 If you purchase an independently reviewed product or service through a link on our website, BGR may receive an affiliate commission.

NASA’s Mars InSight Lander is counting down its final moments as dust continues to cover its solar panels. This week, the team behind InSight took the opportunity to capture one last InSight selfie. The resulting image is a stark contrast to the first or even second selfies that the lander took throughout its mission.

This is the last InSight selfie we’ll probably ever see

The Red Planet is steadily making its way towards a dusty winter, and NASA’s InSight Lander is getting ready to say goodbye. The lander, which has measured seismic activity on the planet since 2018, is slowly running out of power.

It’s a sad moment for Martian exploration, especially considering InSight has measured some of the strongest marsquakes to date in recent months. Still, saying goodbye to the Martian lander is just part of exploring other planets. Built to rely on solar power, there were always going to be issues with dust accumulation on the solar panels.

But, it’s unclear if NASA expected it to accumulate as quickly as it has. Before the lander powers offline completely, NASA plans to put its arm into a resting “retirement” position. Along the way, the team also decided to capture one last InSight selfie to say goodbye to the iconic explorer. Now, the space agency has shared that image with the public.

We’ve known for a while that InSight’s end was coming sooner rather than later. Despite that, NASA had no real plans to save InSight from its demise. Instead, the agency hoped that a whirlwind or really strong gust could drive some of the dust away from the solar panels. Now that such a thing seems unlikely, it’s only a matter of time before the batteries fully run out.

Comparing the last InSight selfie with other images of the lander shows a stark contrast. Even when it landed back in 2018, the lander was already beginning to accumulate dust. That’s because Mars is just a naturally dusty place to be. And, with each sol that passes, more dust has accumulated on those panels.

If nothing else, though, this last InSight selfie can be a good reminder for future projects. Current Martian explorers like the Perseverance rover rely on nuclear power instead of solar. While Solar is a bit more self-sufficient, the dusty nature of the Red Planet limits how effective it can truly be. As such, relying on nuclear power in the future may be key to making another lander like InSight that can last.

See the original version of this article on BGR.com