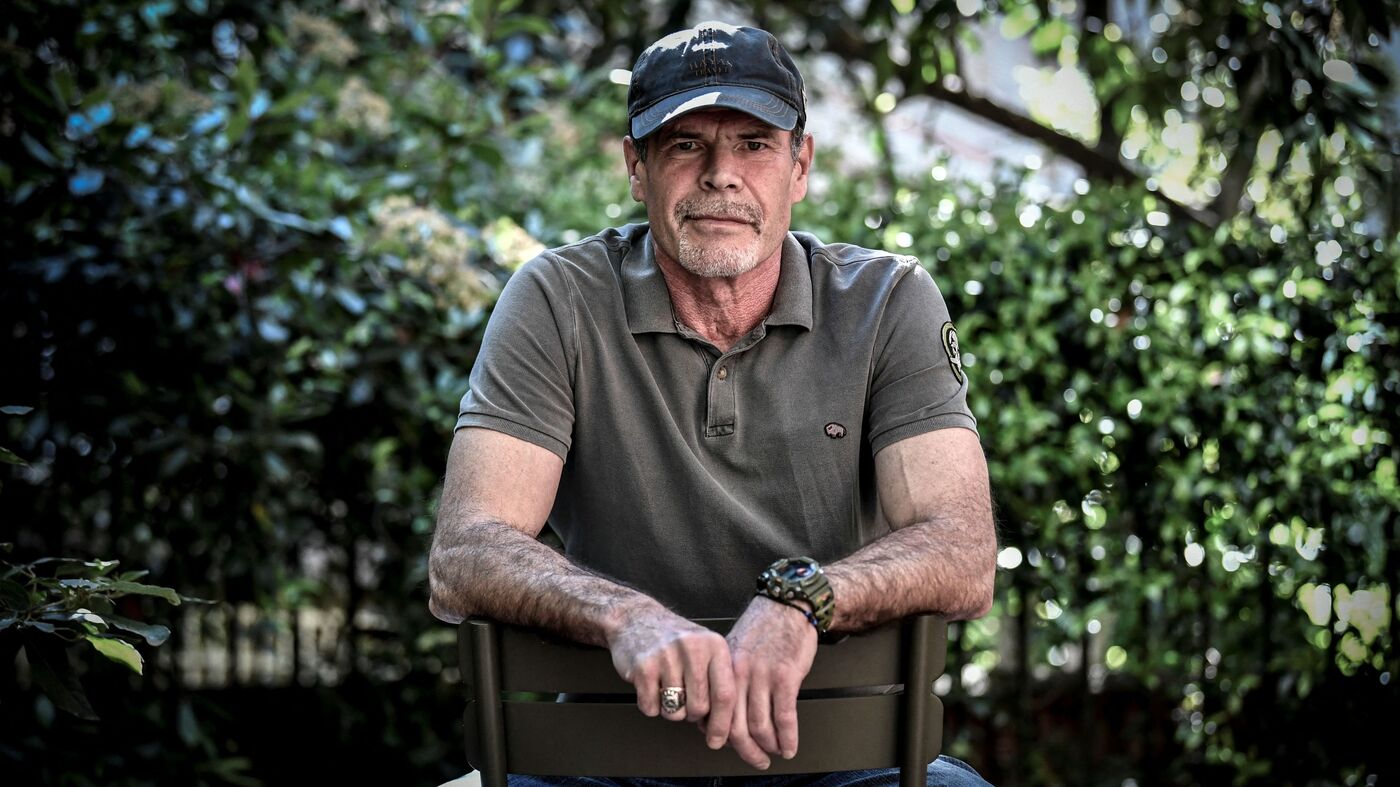 Marat Gabidullin, a former Russian mercenary of the Wagner Group, poses during a photo session on May 11 in Paris.

Marat Gabidullin, a former Russian mercenary of the Wagner Group, poses during a photo session on May 11 in Paris.

PARIS — Marat Gabidullin’s face is lined from years of exposure to the elements, and his hair is thinning. But at 56, he has the trim physique and muscular arms of a man 30 years younger. He wears a chunky ring bearing the image of a skull.

The skull is the symbol of the Wagner Group — a private Russian mercenary force believed to be financed by an oligarch with close ties to President Vladimir Putin. The group is fighting alongside the Russian army in Ukraine’s eastern Donbas region. And it’s widely believed that at least some of the “little green men” — well-trained fighters who wore fatigues without insignia or markings — who took over part of eastern Ukraine in 2014 were Wagner Group soldiers.

But Wagner Group activities aren’t limited to Ukraine. The organization has also been active across Africa in recent years — Libya, Sudan, Mozambique, Mali and the Central African Republic. Today there are thought to be some 10,000 Wagner Group members.

Gabidullin, who lives in France, where he’s asked for asylum, is the first former Wagner soldier to speak publicly. French publisher, Michel Lafon, has released his book about his experiences, Moi Marat, ex-Commandant de l’armee Wagner (I Marat, ex-Commander in the Wagner Army). The book was published last year in Russian but has yet to appear in English.

Born in the Soviet region of Bashkirskaya, in today’s central Russia, Gabidullin served 10 years as an officer in the Soviet army before being laid off. In 2015, he found himself unemployed and at a low point in his life.

“I was depressed and a friend told me about this private military company that I could qualify for because of my military background,” he says.

The Wagner Group first came to public attention in 2014

The Wagner Group is often called “Putin’s shadow army,” though the Kremlin has always denied responsibility for, or even knowledge of, its activities. The group is believed to have been founded in 2014 by a Russian veteran of the Chechen war who so admired Hitler he named the group after Richard Wagner, the führer’s favorite composer.

The organization first came to the world’s attention in 2014, fighting alongside Russian-backed separatists in the Donbas region of eastern Ukraine.

The US government has called Wagner a “proxy force” of Russia’s defense ministry. Gabidullin says in many ways, the group is similar to the Russian army — with many former officers in the corps. But it’s also very different.

“It’s very flexible and can change structure quickly, depending on the circumstances,” he says. “It’s a small military that’s equipped with everything. And what we do depends on our client.”

Those clients are known to range from the board governing Mali to Syrian President Bashar Assad.

“In Syria, one goal was to quickly achieve victory,” he says. “But the second goal that was just as important, was to hide the number of losses that the Russian military had achieved in that campaign. Because we wanted to create an image of a strong Russian military that victory at a small cost.”

But it was all deception, he says. The cost was huge, but no one will ever know the real numbers. In fact, experts say, often it’s Wagner Group soldiers on the front lines — so their losses are higher than the regular army’s, and private armies go uncounted.

The group is known for spreading disinformation as well as mercenaries

Kevin Limonier, a Wagner Group specialist who teaches geopolitics at the University of Paris 8, says Wagner is not a group, it’s a brand, and very much unlike the Russian army. “It does not exist as an official structure,” he says.

That, Limonier says, makes Wagner different from private military companies like the notorious — and very public — US company Blackwater, which made billions during US-led wars in Iraq and Afghanistan before changing hands and renaming itself. Limonier calls the Wagner Group “a galaxy of organizations with different names that are hard to trace.”

Western governments and analysts who study the group believe the Wagner Group is financed by Yevgeny Prigozhin, the same oligarch still wanted by the FBI for interfering in the 2016 US presidential election.

Limonier says Pregozhin has an empire based on three types of activities.

“The first type of activity is, of course, mercenary and the security business,” he says. “The second type is the disinformation business and information warfare, and the third is the exploitation of natural resources in Africa.”

This expert says Wagner’s earnings have grown tremendously in recent years because of its operations in Africa.

A recent documentary that aired on the France 2 public television network shows how these three activities intersect to — as the documentary puts it — prop up corrupt regimes, terrorize local populations and spin lies.

Wagner has gotten attention in France in recent years because of its presence in former French colonies, notably the Central African Republic and Mali. France had a 5,000-strong force fighting terrorism in Mali from 2013 until January of this year.

When those forces entered Mali, they were widely welcomed and pushed back a jihadist offensive. But local hostilities mounted over the years, which Limonier says were stocked by the Wagner Group.

“Because Mali is a former French colony, relations with Paris can be complicated,” he says. “A French presence can be viewed as the continuity of the colonial authority.”

Limonier says the Wagner Group amplified this narrative, accusing the French forces of stirring up violence in the region, and pushing the message in disinformation campaigns.

In April, the French army released imagery from drone cameras that showed Wagner Group soldiers laying out dead bodies in the sand near a French army base in Mali after the French withdrew. The images made the rounds of social media with the statement, “look what the French army left behind.”

A May 30 United Nations report documents a rise in violence in Mali – summary executions, forced disappearances and torture – since its military began partnering with the Russian mercenaries in January. The UN says the number of civilians killed in Mali rose by 324% compared to last year, and human rights abuses rose by 150%. The Malian army’s role in these acts was up by 932% in just the first three months of 2022, according to the report.

The only way to fight the Wagner Group is to expose what they are doing, says Limonier. But it can be dangerous. Three Russian journalists working with an investigative media outlet run by exiled, anti-Kremlin Russian tycoon Mikhail Khodorkovsky were killed in an ambush in 2018 while trying to cover Wagner’s operations in the Central African Republic.

“Wagner is organized by people who grew up in a post-Soviet society, where violence and death just don’t have the same meaning as they have in our Western societies,” says Limonier.

Gabidullin says when you’re part of Wagner, you more or less fend for yourself, because your job doesn’t exist in the real world.

“A person who is part of this group exists in a legal vacuum,” he says. “So whatever happens to him, happens.” The company is not registered in Russia or anywhere else.

But that also means, Gabidullin says, that soldiers are relieved of any consequences for their behavior — a person who “doesn’t exist” can do anything.

Gabidullin says he left Wagner because he became morally exhausted in Syria, fighting for a corrupt government that was hated by its own citizens. He says he was asked to fight in Ukraine but refused.

He says he wrote his book because he wants the Russian people to know the truth about Syria, their country’s wars and the lies of their government.