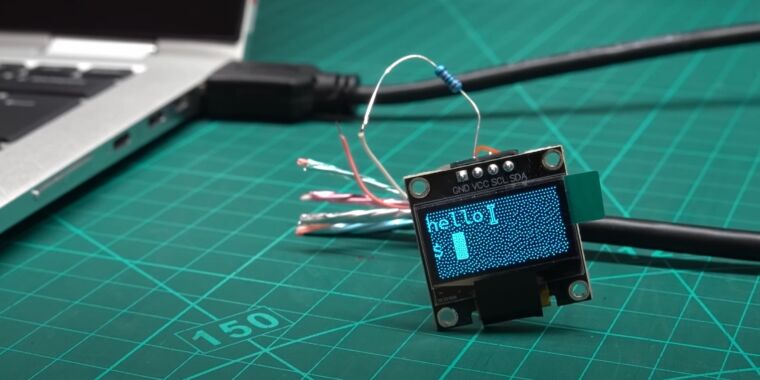 When you think of a display that connects to its source over HDMI, you probably think of the TV in your living room, your desktop monitor, or maybe even a smaller display, like a portable monitor. You probably don’t think of an OLED PC monitor that measures 0.96 of an inch diagonally.

While acknowledging the limited uses for a tiny HDMI PC monitor, maker mitxela had the urge to get a 128×68 dot matrix OLED screen up and running as a PC monitor that connects directly to its system. The maker described the creation as the “smallest and worst HDMI display ever.”

The small OLED screen is not special on its own. Makers use them for all sorts of projects, like DIY smartwatches, message boards, or weather displays, for example. What makes mitxela’s project unique is that it turns the OLED panel into a standard PC monitor that can be plugged into the PC’s HDMI port directly—no Arduino or microcontroller required.

Mitxela showed the monitor connected to a Linux system and running i3, an open source tiling windows manager. The maker used the display to open a second terminal in i3, resize the windows, and split one.

To create the mini monitor, mitxela opened an HDMI cable to get access to four necessary wires and connected them to the monitor by soldering them to a header connector, the maker said.

The trick was to leverage the HDMI cable’s I2C EEPROM (electrically erasable programmable read-only memory). Mitxela said this allowed the monitor to work over the DDC (display data channel) protocols that dictate how a PC reads basic information about the monitor, like resolution.

Perhaps the most convenient part of this project is that the monitor does not need to be plugged into an outlet.

“The 5V line on an HDMI port can apparently source up to 50mA, so we don’t even need a power supply,” mitxela said.

The maker noted that the monitor’s frame rate is “not great.” There’s also a lot of risk for damaged parts, especially when connecting it to a laptop, so the project will be a no-go for many. But if you want to learn more about the project, the script files are available via GitHub.

You can check out the DIY monitor in action below: