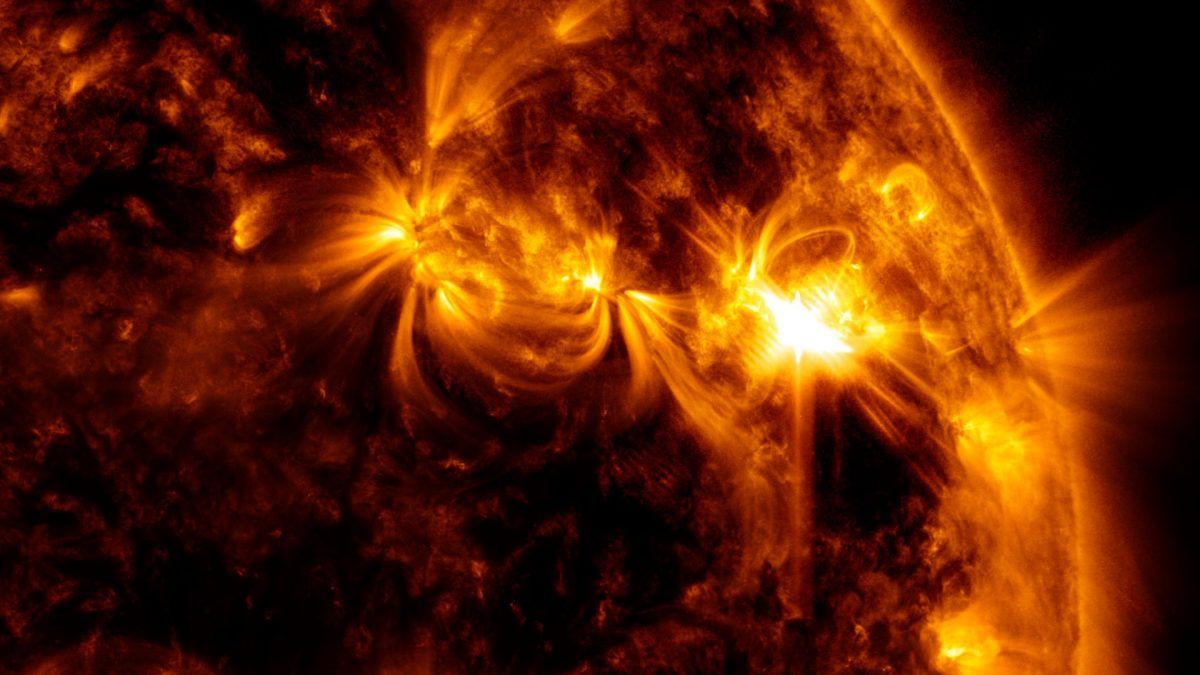 NASA’s orbiting Solar Dynamics Observatory captured yet another solar flare blasting from the overactive sunspot that triggered the same radio blackouts and stunning aurora displays on Earth earlier this week.

The Solar Dynamics Observatory images the sun‘s entire disk across a range of wavelengths every ten seconds, providing pictures with a resolution 10 times higher than that of high-definition television, according to NASA. This colorized image in particular shows the flare in the extreme ultraviolet part of the spectrum that highlights its high temperature.

An M-class flare is a fairly powerful flare, a sudden release of electromagnetic radiation from the sun that travels at the speed of light. The US National Oceanic and Atmospheric Administration (NOAA) ranked the Thursday flare as M9.6, meaning it was not too far from becoming the strongest type, X-class. The flare caused a moderate radio blackout as it hit Earth, NOAA said in the statement.

solar flares can disrupt high frequency radio communications as the X-ray and extreme ultraviolet radiation they emit ionize the upper part of Earth’s atmosphere, the ionosphere. The ionosphere extends from 30 miles (48 kilometers) to 600 miles (965 km) above the planet’s surface and includes the outermost atmospheric layers: the exosphere, the thermosphere and parts of the mesosphere.

Under normal circumstances, high frequency radio waves, which transmit communication signals across long distances, bounce off particles in the upper ionosphere back to earth. But when a solar flare charges up the lower ionosphere, the radio waves lose energy as they pass through, the atmosphere degrading or even absorbing them.

A moderate blackout can disrupt communications for tens of minutes, according to the UK’s national weather forecaster Met Office. This type of blackout affects mostly aviation and marine communication, but also radio amateurs and shortwave broadcasting stations. The ionization can also disrupt transmission of signals from navigation satellites, such as the US GPS network.

The “magnetically complex” sunspot, called 2975, that gave birth to the latest flare has spurted out about 20 solar flares over the past week including an X-class flare that blasted from the sun on Wednesday (March 30).

A few of these flares have been accompanied by coronal mass ejections (CMEs), which are expulsions of magnetized plasma from the sun’s upper atmosphere, the corona. CMEs travel much slower than flares and usually reach Earth within a few days of forming. When a CME arrives, it may disrupt the planet’s magnetic fieldtriggering beautiful Aurora displays.

On Wednesday night and Thursday early morning, skywatchers reported stunning auroras all over Canada, in the northern parts of the US and in New Zealand.

According to the Met Office, another CME, this one associated with Wednesday’s X-class flare, is due to hit Earth Saturday (April 2) and will likely give the polar lights another boost. Because Earth’s magnetic field is the weakest above polar regions, the charged solar plasma penetrates deeper into the atmosphere in these areas. The interaction of the charged solar particles with the particles in Earth’s atmosphere results in the glowing spectacles. The stronger the CME, the farther from the poles auroras can be observed.

So, if you can, head poleward and away from city lights over the weekend and check our ‘Where and how to photograph the aurora’ guide.

Aurora-viewing conditions are likely to remain solid next week; additional M-class flares are likely since sunspot 2975 shows no signs of fading just yet, the Met Office said.