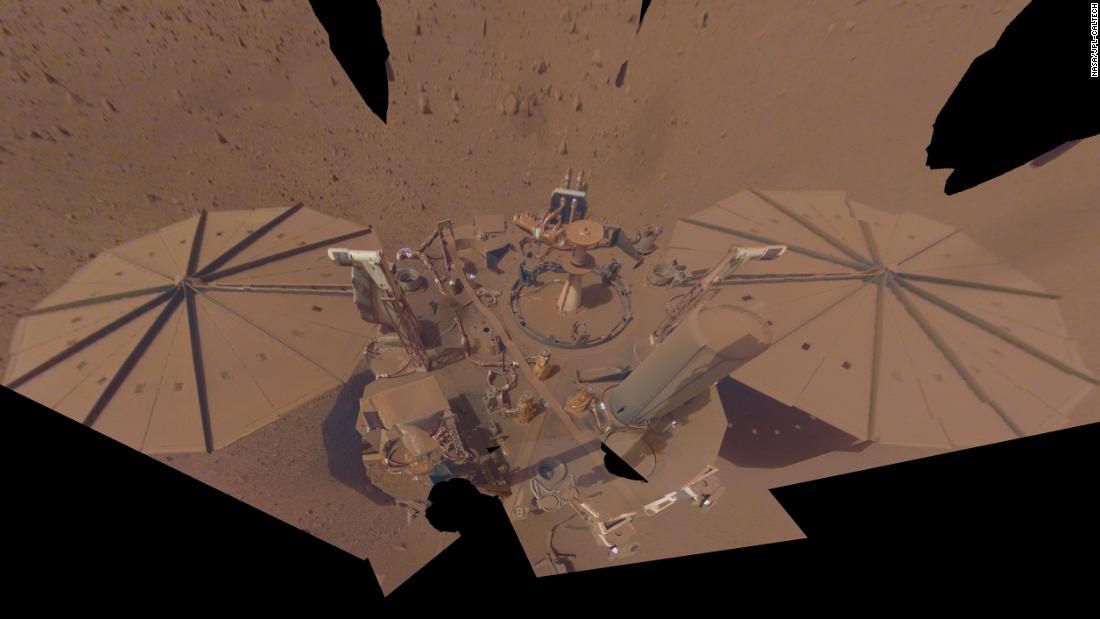 The stationary spacecraft captured the image on April 24 using its robotic arm, which will soon be placed into a final resting position called “retirement pose” this month. In order to take a selfie, the arm has to move several times, and that won’t be possible anymore.

“Before losing more solar energy, I took some time to take in my surroundings and snapped my final selfie before I rest my arm and camera permanently in the stowed position,” the InSight account tweeted on Tuesday.

Due to a decreasing power supply, the mission will cease scientific operations by the end of late summer. It has been revealing the mysterious interior of Mars since landing in November 2018.

InSight’s solar panels have been increasingly covered in red Martian dust, despite creative efforts by the mission’s team on Earth. This accumulation will only worsen as Mars now enters winter, when more dust is lofted into the atmosphere.

These floating particles reduce the sunlight necessary to charge the solar panels that power InSight, which is currently working on an extended mission that was expected to last through December. The mission achieved its primary goals after its first two years on Mars.

The final selfie shows that the lander is covered with far more dust than it was in previous selfies from December 2018 and April 2019.

The lander went into safe mode on May 7, when its energy levels dropped, causing it to cease everything but essential functions. The team anticipates this could happen more frequently in the future as dust levels increase.

The stationary lander is only able to collect about one-tenth of the available power supply it had after landing on Mars in November 2018. When InSight first landed, it could produce about 5,000 watt-hours each day on Mars, the equivalent of what it takes to power an electric oven for an hour and 40 minutes.

Now, the lander produces 500 watt-hours per day, enough to power an electric oven for just 10 minutes. If 25% of the solar were cleaned, InSight would experience a power boost enough panels to keep it going. The spacecraft or has made many dust devils, winds none have been close enough to clear off the solar panels.

“We’ve been hoping for a dust cleaning like we saw happen several times to the Spirit and Opportunity rovers,” said Bruce Banerdt, InSight’s principal investigator at NASA’s Jet Propulsion Laboratory, in a statement. “That’s still possible, but energy is low enough that our focus is making the most of the science we can still collect.”

By the end of the summer, the team will turn off the seismometer, end science operations, and monitor what power levels remain on the lander. At the end of the year, the InSight mission will conclude.

The InSight team, however, will still listen for any possible communication from the spacecraft and determine if it could ever operate again.

The lander’s highly sensitive seismometer, called the Seismic Experiment for Interior Structure, has detected more than 1,300 marsquakes from hundreds and thousands of miles away. InSight detected the largest one yet, at magnitude 5, on May 4.

“Even as we’re starting to get close to the end of our mission, Mars is still giving us some really amazing things to see,” Banerdt said.

The data collected by InSight so far has revealed new details about the little-known Martian core, interior layers and crust. It has recorded weather data and analyzed the remains of the magnetic field that once also existed on Mars.

InSight’s steady stream of data heading to scientists on Earth will stop when the solar cells can no longer generate enough power. But researchers will be studying the detections made by InSight for decades to come in order to learn as much as possible about our enigmatic planetary neighbor.