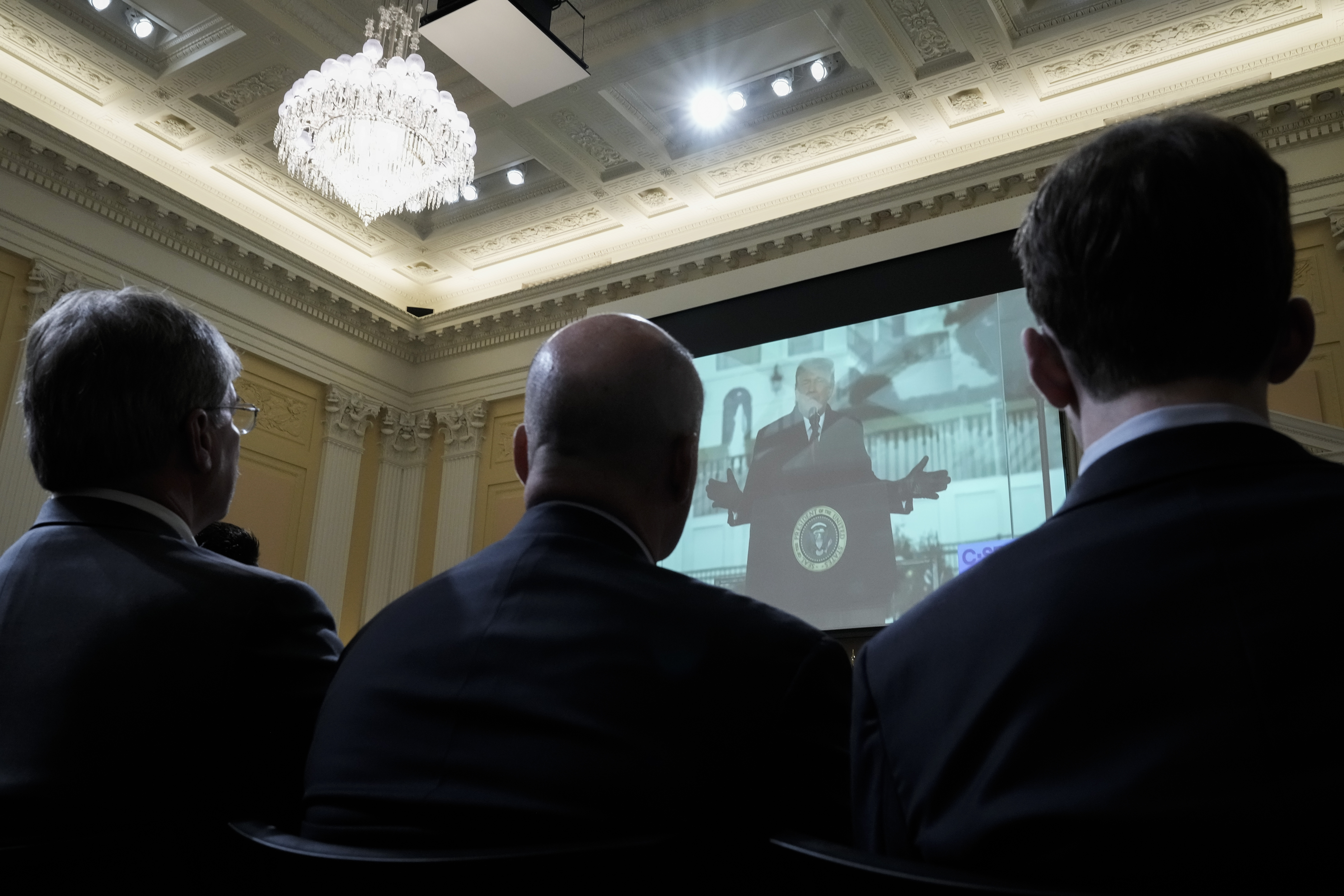 “What the president wanted the vice president to do was not just wrong. It was illegal and unconstitutional,” panel vice chair Rep. Liz Cheney (R-Wyo.) said.

Their case came into sharp relief Thursday, when the panel presented its evidence in a clear chronology.

First, Trump was told over and over again in December 2020 — by Pence, senior Pence aides, White House attorneys and others — that his effort to overturn the election on Jan. 6, 2021, was illegal. He couldn’t deputize Pence to reject Joe Biden’s electors, they all told him.

Yet on Jan. 5, the reports of Pence’s resistance began to appear in the press, Trump ordered his campaign to issue a false statement claiming that he and his vice president were in “total agreement” that Pence had the power to overturn the election. Trump dictated that statement to then-campaign aid Jason Miller, according to testimony from Miller himself. The statement infuriated Pence’s team.

Then, under the advice of attorney John Eastman — who himself had previously raised doubts about the legality of the strategy — Trump continued to lean on Pence to upend the election results even on the morning of Jan. 6. In a phone call, Trump browbeat his vice president, calling him “the p-word,” in the words of one adviser who had heard about the call from Ivanka Trump.

When Pence continued to refuse, Trump whipped up a crowd of thousands of his supporters gathered at the Ellipse, adding language to his speech that said he hoped Pence would do what the vice president had already said he wouldn’t.

Early that afternoon, Trump was told by aides that the Capitol was under siege. The committee played video evidence of White House aids describing how they relayed concerns to top officials, worries that were then told to Trump via former White House Chief of Staff Mark Meadows. But at 2:24pm, 10 minutes after Congress and Pence fled for safety from rioters who’d broken in, Trump attacked Pence in a tweet, accusing him of lacking courage. One White House press aide, Sarah Matthews, told the committee that the tweet “poured gasoline on the fire.”

Trump never called security officials during the attack. In fact, the select committee showed that Pence largely took charge in trying to respond to the attack even while sheltering beneath the Capitol. Trump, meanwhile, called allies trying to continue his effort to delay the count of electoral votes and watched footage of the riot on TV, the panel illustrated.

In the aftermath of the attack, then-White House lawyer Eric Herschmann urged Eastman to get a “good f-ing criminal defense lawyer.” Days later, Eastman would ask Rudy Giuliani for a spot on Trump’s “pardon list.” But no pardon ever cam.

The select committee has long emphasized its belief that Trump’s actions amounted to a crime. It asked US District Court Judge David Carter in March to invalidate Eastman’s claims of attorney-client privilege over thousands of emails, in part by suggesting some fell under the “crime-fraud” exception. Carter agreed, and issued a ruling — cited over and over again by the committee in its first three public hearings — saying Trump and Eastman “likely” entered into a criminal conspiracy to obstruct Congress.

That ruling laid out a blueprint for the panel’s potential criminal case against Trump.

However, DOJ on Thursday suggested the select committee was actually preventing its efforts to investigate the Capitol attack. In a blistering letter dated June 15, senior department leaders accused the Jan. 6 panel of complicating its work via a “failure” to provide prosecutors access to more than 1,000 transcripts of witness interviews. The frustration goes both ways, as the select committee has vented about the department’s refusal to act on criminal contempt referrals from key witnesses in their investigation.

It’s unclear what effect the rift will have on either side’s efforts. The select committee intends to keep investigating in the coming months and is unlikely to share its witness transcripts until they conclude, Thompson has indicated. DOJ has agreed to postpone its premiere seditious conspiracy case against the leaders of the Proud Boys until December, citing “prejudice” caused by the select committee’s public hearings.

DOJ has indicated it would share those transcripts with defense attorneys as soon as it receives them, a factor that the select committee may be considering as it decides when to share its evidence.

Thompson flagged the panel would not provide transcripts yet but would eventually turn them over.

“That does not mean that we’re not going to cooperate. We got the letter yesterday. We’ve interviewed over 1,000 witnesses,” he told reporters. “We will eventually cooperate with them.”