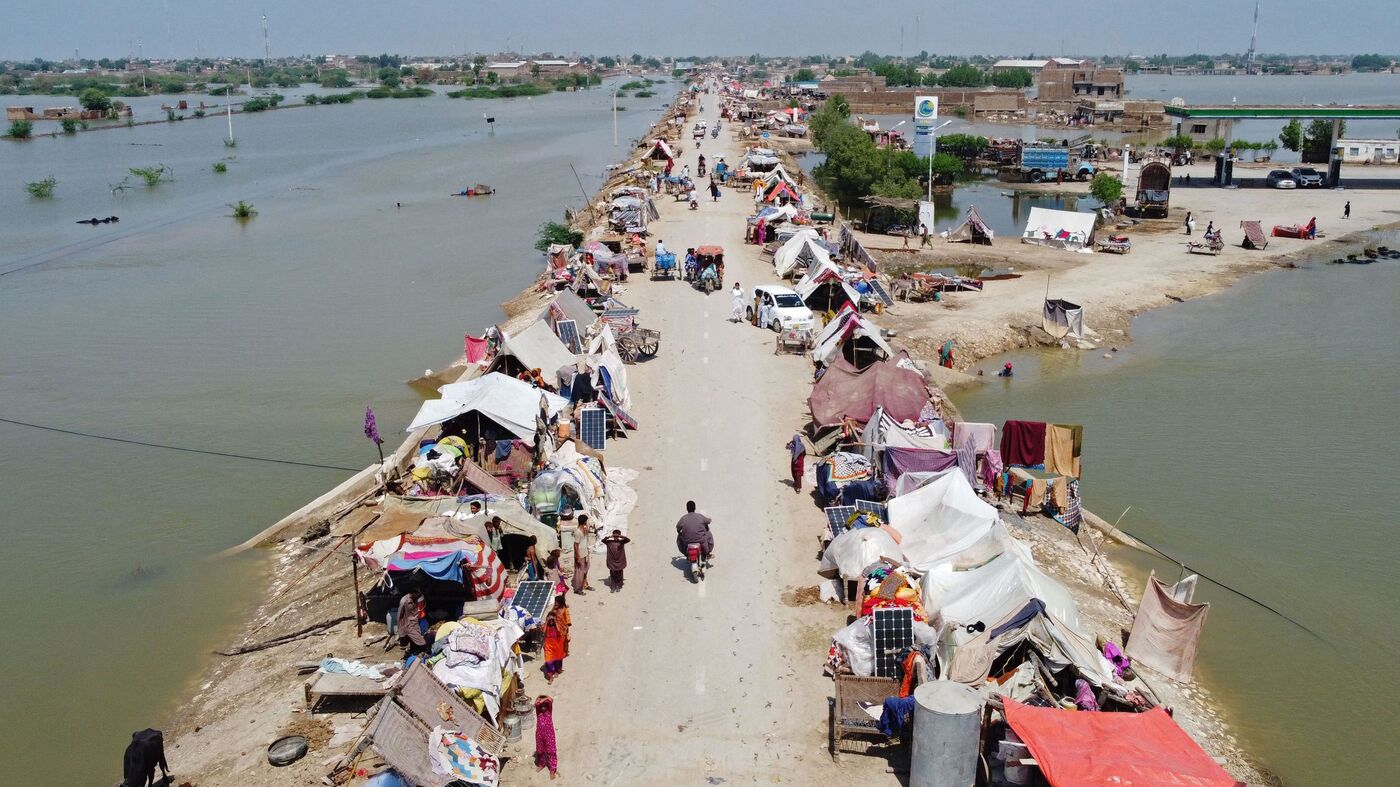 In Pakistan, deadly flooding from an unprecedented monsoon season has destroyed lives, livelihoods and infrastructure, in what its climate minister has called “a serious climate catastrophe.”

Some 33 million Pakistanis have been affected by the flooding since it began in June. It has killed more than 1,100 people — including hundreds of children — and the death toll is expected to rise.

More than a million homes, 2 million acres of crops and some 3,000 miles of roads have been damaged. Half a million people are now in displacement camps and many others are without shelter at all, scrambling just to get to higher ground.

Sherry Rehman, Pakistan’s minister for climate change, told morning edition on Thursday that an area bigger than the state of Colorado is currently submerged, with entire towns and farms underwater (the flooding has also created a massive inland lake that is visible from space, according to satellite imagery).

She says this is no regular monsoon season, but “some monstrous new phenomenon” beyond anything she’s experienced, including Pakistan’s 2010 “super flood.”

The country is typically prepared with water pumps to respond to monsoons and helicopters to rescue people from river floods, but officials now have nowhere to pump the water because it’s simply everywhere, and couldn’t send out helicopters to certain areas because of the incessant rain .

Sherry Rehman, Pakistan’s minister of climate change, pictured speaking to the AFP in Islamabad in June.

Sherry Rehman, Pakistan’s minister of climate change, pictured speaking to the AFP in Islamabad in June.

All three arms of the military have been deployed, Rehman says, “and we are still overstretched.” The government is working to fund flood relief and provide humanitarian aid like tents and food packages — and is also hoping to raise $160 million in emergency funds through an appeal with the United Nations — but, according to Rehman, “the volume is too high I’m just do [it] in one go.”

Global aid in the form of tents, food and medicine is starting to arrive from China, Turkey and the United Arab Emirates. The European Union has also pledged financial support, and the US just will provide $30 million in humanitarian aid to respond to the floods.

In the meantime, many civilian volunteers are working on the frontlines to conduct rescue operations and deliver emergency relief. morning edition spoke with one of them: Imran Lodhi, a climate activist and university teacher who led a group of students to deliver tents and food in Punjab province.

He spoke to host Steve Inskeep while perched on a rare and valuable bit of high ground: a levee between a flooded area and a rushing river.

“I see hundreds and thousands of people, helpless people. I see a complete blackout in this area,” he says, describing his view. “There is no electricity here, and there is no internet. People are trying to call for help. The water level has gone down a bit. But the problem is it has already submerged hundreds of villages in this area, and people are out of their men.”

People are taking refuge on roads and islands to avoid the water, he says, but focused on getting their families to safety as opposed to packing belongings. Their biggest concern now is where their next meal will come from, and how to protect their loved ones — especially vulnerable children — from waterborne diseases.

The government has tried to help, Lodi adds, but its response has been limited and “it seems like the crisis is beyond their capacity.” Volunteer groups like his have been helping to mobilize people in communities who are trying to reach the affected areas.

There was a brief disruption mid-conversation, as Lodi got out of his vehicle to speak with someone. When he returned to the phone, he explained that people on the levee had just tried to break into his car because they thought it was full of much-needed supplies—and not for the first time.

“It has happened several times in different areas, but I have come to know how to deal with that situation,” he says.

Lodi says many flood survivors, including those around him on the levee, remain at high risk. He describes two back-to-back life-threatening situations: First homes and lives were lost to a flash flood, now thousands of people have lost everything and are in need of basic support.

“And that thing is alarming,” he says, “because if some relief effort at large scale doesn’t happen, this can transform into a humanitarian crisis.”