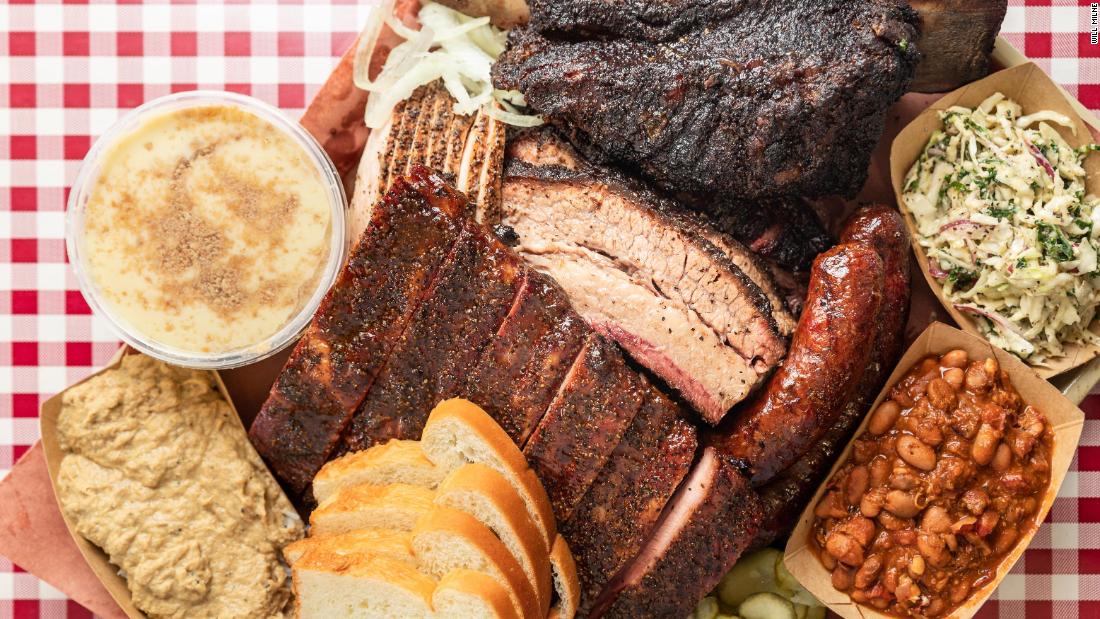 (CNN) — Once every four years, Texas Monthly magazine with one of its most influential come out cover stories.

And it’s not about oil or the economy or politics or tourism. It’s about something that might be taken even more seriously by folks there.

For people who had not been paying close attention to all the big changes that have been taking place in the Texas barbecue scene for the past 10 years or so, that November 2021 issue was a surprise or even a shocker.

Absent from the top 50 were the longtime revered stalwarts in Lockhart, a small city in rural Central Texas that looms large in the state’s barbecue lore.

With traditional spots generally taking a back seat to newcomers, CNN Travel talked to Daniel Vaughn, who has the enviable job of full-time barbecue editor at Texas Monthly, to find out how the magazine comes up with its rankings and what the heck has been going on in Texas and with the takeover of “big city style.”

And he also served a heaping helping of picks in all corners of the second-largest state in the nation to craft your barbecue road trip.

Goldee’s Barbecue in Fort Worth is Texas Monthly’s No. 1 spot for barbecue in the state.

How does Texas Monthly come up with its list?

This top 50 list is a major, thorough effort, so much so that it’s feasible to do it only once every four years.

“We do it that way simply because it’s such a huge undertaking from so many staff members. We spend about six months putting the list together.” Vaughn said. “We like to think of it as the Olympics of barbecue.”

How do they pull it off?

He said more than 30 staff members go out around the state and that “my full-time job is a scouting mission for the next top 50. I’m writing about all the places along the way, but that’s primarily what I’m doing . I’m going out there to try all these new barbecue joints opening up all over the state.”

Vaughn assembles a large list and divvies it up among the staff members. He gives them barbecue tasting lessons in the office before they head out. They then fill out score sheets and bring them all back and comb through the list.

Then it’s back out again to narrow down the top 10.

“When it comes down to No. 1… there’s such a fine line between each of these top 10 places. Once you’re in the top 10, the difference between the No. 1 place and the No. 10 place is pretty mini.”

It comes down to “who doesn’t screw up. And we visited Goldee’s enough to try to get them to slip up, and they just didn’t.”

This is Texas Monthly’s latest list of top 10 barbecue joints:

Click here for Texas Monthly’s entire top 50 list. You’ll notice a lot of big-city and new names on there. And that’s a big deal.

“We Goldee’s enough to visit to get them to slip up, and they just didn’t,” said Daniel Vaughn, Texas Monthly’s barbecue editor.

CNN Travel wanted to know more about what’s important in picking out the best spots: The meat? The sides? Atmosphere and service?

At the core of it is the meat, Vaughn said.

“It doesn’t matter what cut you’re talking about, you want something that’s juicy and tender. That’s what it really comes down to.”

Back in 2017 and 2013, a lot of what separated the best of the best joints from the others on the lists was the brisket.

“These days, it’s not really the case anymore. So many places are doing such a great brisket that it’s not … the thing that sets you apart anymore. That to us was really surprising,” he said.

“As far as tie-breakers go, it does come down to how well you’re executing sides … do they taste great? The desserts, are you going beyond just some peach cobbler and banana pudding.”

Vaughn cites the standout pork hash at Goldee’s, typically a dish associated with South Carolina. And for dessert there, he praises the sticky rice with mangoes.

at No. 2 InterStellar, the Mexican-hot-chocolate rice pudding is the standout dessert, according to the Top 50 list.

Those extras can elevate a place above the competition.

The No. 2 joint on the list, InterStellar BBQ, is located northwest Austin.

Deep in the heart of Texas and deep in the heart of barbecue traditionalists is Lockhart. It’s hard to overstate the revered status it’s held for decades. So how did people react when none of their storied joints appeared in the top 50 list for 2021?

Vaughn said he knew it was surprising visited to people who haven’t Lockhart, about 35 miles south of Austin, in the past 10 years or so. “To the people who go and eat barbecue often — the barbecue hounds out there — I don’t think they were surprised.”

He noted the steady dwindling of Lockhart joints on the top 50 list. This didn’t all happen on the 2021 list, Vaughn said.

So what happened? It turns out “what didn’t happen?” might be the better question.

These beloved spots aren’t getting lazy resting on their laurels or serving inferior dishes to 20 years ago, Vaughn said. They’re just aren’t changing at all.

“And when they’re not changing, it becomes really new blood coming in that’s hungry, that’s talented, and that also has a little more freedom to do things that are new and different.”

“There’s no longer this idea of ​​you’re happy going into a place and, ‘Ah, they just had an off day. We’ll get ’em next time.’ No. It’s like: ‘That sucked. I’m never going back.’ There’s too many options where you know that’s not going to happen.”

“Great Texas BBQ is built on quality ingredients, clean smoke from Post Oak, and a commitment to keeping it low and slow,” InterStellar says on its website.

The rise of big city barbecue

So is this a revolution?

“We’re pretty deep into this thing. It’s been about 10 years since we’ve been doing barbecue like this,” Vaughn said. “I don’t think we’re in the midst of a revolution right now. I think the revolution has already happened.”

Just-opened joints are replicating the style of other recently opened spots. “That why we’ve got such a high concentration of great barbecue in Texas.”

In the past, Texas barbecue was defined by regional styles. For example: South Texas with barbacoa de cabeza (beef head barbacoa); East Texas with its saucy ribs and brisket usually served chopped on a bun; Hill Country with cooking directly over the coals; and Central Texas with its meat market roots.

However, the key phrase here is “in the past.”

“The distinctions between these different regions of Texas barbecue are becoming more and more blurred,” Vaughn said.

Above all, “you want something that’s juicy and tender,” Vaughn said. That’s what has people lined up at Goldee’s.

“By big city barbecue, I mean … a large variety of different proteins on your menu, you’ve got specialty items that might be outside the norm, making your own sausage, using really high-quality raw ingredients … and then offering a wide variety of sides and desserts,” Vaughn said. These place might also sell alcohol.

“For the most part, whether you’re in Lubbock at Evie Mae’s or you’re down in Houston at Truth Barbecue or over in San Antonio at 2M Smokehouse … you’re getting generally a similar style of barbecue.”

The joints in smaller towns in Texas can’t compete as easily with this focus on high-quality, large-variety, higher-cost concept, he said.

And Vaughn notes the style is spreading.

“I don’t go to a big city in the United States, or really around the world anymore, without finding some sort of Texas-style barbecue,” Vaughn said. “It has expanded with such speed that it’s kind of mind-boggling.”

For a good selection of great barbecue joints within an easy drive, Austin is a great choice. That’s where InterStellar, with Warren McDonald pictured here, is located.

You might be inspired at this point to plan a barbecue-centric trip to Texas. But it is a BIG state any way you slice it. If you don’t have the time and inclination to cover so much territory, what’s the single best area to visit? Turn to the state’s biggest city.

“I’d say the greatest concentration of great barbecue is the Houston area,” Vaughn said. “I don’t know of an area in Texas that has more great barbecue than that.”

And if spread-out Houston is just too much to tackle?

Founded in 2017, Convenience West BBQ is a great barbecue option in west Texas.

Out on the edges

Once again, with feeling: Texas is a BIG state. Knowing that Goldee’s in Fort Worth is highly recommended does you no good if you’re in El Paso or Brownsville. So Vaughn shared some favorites in the state’s extremities to try:

Big city barbecue beyond the top 50 –

Just because the joint didn’t make the top 50 doesn’t mean it can’t serve a memorable meal. Vaughn shared his recommendations for other good options in the biggest cities: