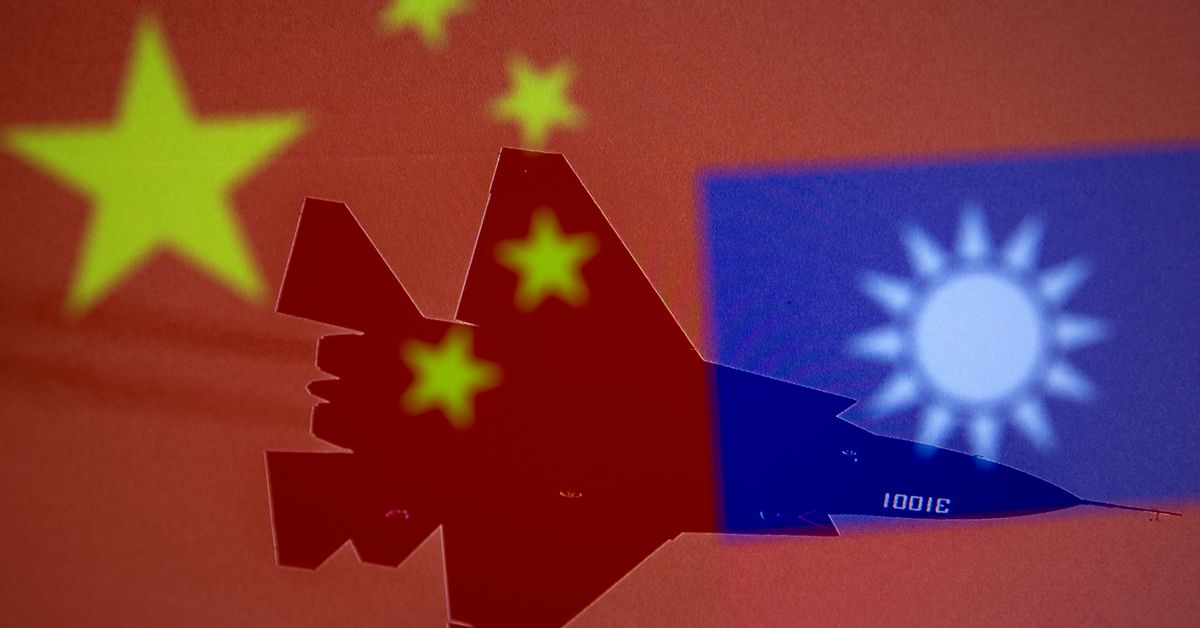 Chinese and Taiwanese national flags are displayed alongside a military airplane in this illustration taken April 9, 2021. REUTERS/Dado Ruvic/Illustration

TAIPEI, June 21 (Reuters) – Taiwan scrambled jets on Tuesday to warn away 29 Chinese aircraft in its air defense zone, including bombers that flew to the south of the island and into the Pacific, in the latest uptick in tensions and largest incursion since late May.

Taiwan, which China claims as its own territory, has complained for the past two years or repeated missions by the Chinese air force near the democratically governed island, often in the southwestern part of its air defense zone, or ADIZ, close to the Taiwan-controlled Silver Islands.

Some of the aircraft flew in an area to the northeast of the Pratas, according to a map the ministry provided.

However, the bombers, accompanied by an electronic warfare and an intelligence gathering aircraft, flew into the Bashi Channel which separated Taiwan from the Philippines and into the Pacific before turning back to China on the route they came in.

Taiwan sent combat aircraft to warn away the Chinese aircraft, while missile systems were deployed to monitor them, the ministry said, using standard wording for its response.

It was the largest incursion since Taiwan reported 30 Chinese aircraft in its ADIZ on May 30. The largest to date this year occurred on Jan. 23, involving 39 aircraft. read more

There was no immediate comment from China, which has in the past said that such moves were drills aimed at protecting the country’s sovereignty.

A US State Department spokesperson told Reuters in an email that Beijing should “cease its military, diplomatic, and economic pressure and intimidation against Taiwan”.

China launched its third aircraft carrier on Friday, the Fujian, named after the province opposite Taiwan. read more

China’s military said last month it had conducted an exercise around Taiwan as a “solemn warning” against its “collusion” with the United States.

That came after US President Joe Biden angered China by appearing to signal a change in a US policy of “strategic ambiguity” on Taiwan by saying the United States would get involved militarily if China were to attack the island.

China has stepped up pressure on Taiwan to accept its sovereignty claims. The Taipei government says it wants peace but will defend itself if attacked.

No shots have been fired and the Chinese aircraft have not been flying in Taiwan’s air space, but in its ADIZ, a wider area Taiwan monitors and patrols that acts to give it more time to respond to any threats.

Reporting by Ben Blanchard in Taipei and Michael Martina in Washington; Editing by Frank Jack Daniel and Mark Heinrich