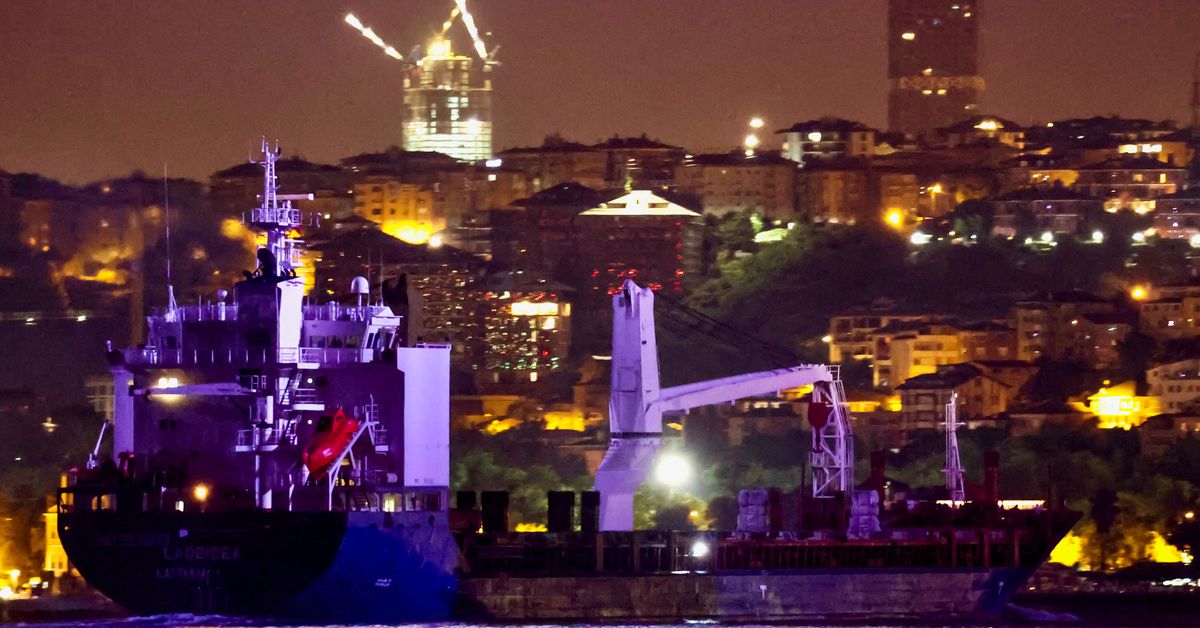 BEIRUT, July 28 (Reuters) – A Syrian ship under US sanctions has docked in the northern Lebanese port of Tripoli carrying barley and wheat that the Ukrainian embassy in Beirut told Reuters on Thursday had been plundered by Russia from Ukrainian stores.

The Laodicea docked in Tripoli on Wednesday, according to shipping data website MarineTraffic.

“The ship has traveled from a Crimean port that is closed to international shipping, carrying 5,000 tonnes of barley and 5,000 tonnes of flour that we suspect was taken from Ukrainian stores,” the embassy told Reuters.

“This is the first time a shipment of stolen grains and flour reaches Lebanon,” the statement said.

Russia has previously denied the allegations that it has stolen Ukrainian grain. An official from the Russian embassy in Lebanon told Reuters it could not immediately comment.

A Lebanese official confirmed that the issue had been raised during a Thursday meeting with Aoun and noted Ukraine’s general concerns that Russia might try selling stolen Ukrainian wheat to a host of countries including Lebanon.

Lebanon’s economy minister Amin Salam told Reuters that the country’s customs authority and its agriculture ministry were following up on the issue.

Salam had said earlier on Thursday that severe bread shortages in Lebanon would be eased this week by new wheat imports, but did not say where they were coming from.

The agriculture minister, the head of customs and the head of Tripoli port did not immediately respond to requests for comment.

“We are checking the accuracy of the information that has been mentioned in the media, and we have laws and we resort to Lebanese law,” Lebanon’s transport minister Ali Hamie told Reuters.

A customs official shipping and source told Reuters that the Tripoli port had not offloaded the ship due to suspicions it was carrying stolen goods.

“Nothing was taken off the ship – as soon as we got the information, we stopped everything,” the customs official said.

The Laodicea is one of a trio of ships owned by the Syrian port authority that Ukraine says have been transporting wheat plundered from stores in territory recently overtaken by Russia.

All three ships have been sanctioned by the United States since 2015.

When asked about the Laodicea’s docking in Tripoli, State Department Ned Price said he could not comment on the specific vessel but said he could “confirm the fact that the Russians have pilfered grain belonging to Ukraine” in general.

The Laodicea’s arrival coincides with a new round of severe bread shortages across Lebanon, where a three-year economic crisis has slowed imports of subsidized wheat.

Bakeries were inundated this week with frustrated crowds in a country where about half the population is food insecure, according to the World Food Program.

Lebanon used to import about 60% of its wheat from Ukraine, but those shipments have been disrupted by Russia’s invasion and blockade of the main Black Sea ports through which Ukraine once exported.

Ukraine had summarized legal exports of wheat to Lebanon in mid-July, according to the Ukrainian embassy and the head of Lebanon’s mills association.