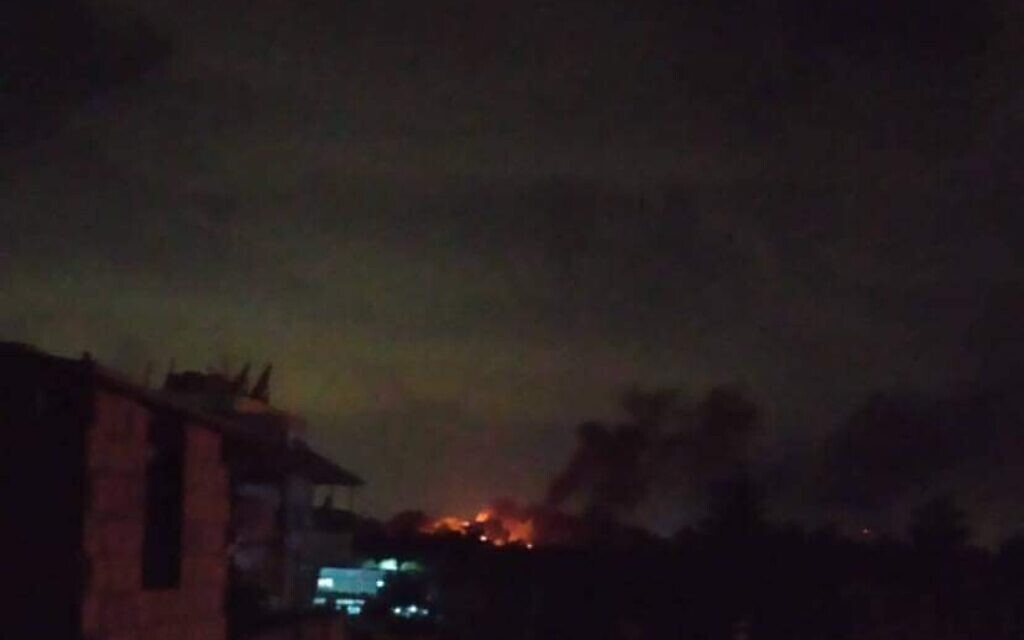 Israeli fighter jets launched a series of airstrikes on areas near the Syrian capital Damascus and the coastal city of Tartus on Sunday night, killing three soldiers and wounding three others, Syria’s official state media reported.

Israel does not acknowledge specific strikes in the enemy state, and had no comment on Sunday’s reports.

Heavy explosions were heard over the coastal city and along the Lebanese coast, according to local media reports.

The state-run broadcaster SANA, citing a military source, said some of the missiles — launched from over Lebanon at the Damascus countryside and from over the sea at Tartus — were intercepted.

The Syrian military source also said damage was caused to the sites that were hit, without elaborating to the extent or the nature of the targets.

Footage circulating on social media apparently showed a burning site in the Tartus area. SANA confirmed a fire had erupted at a site that was targeted. It did not specify the ranks and identities of those reportedly killed and wounded.

The Syrian Observatory for Human Rights, a London-based watchdog, claimed the Israeli strike targeted a Syrian army air defense base in the area of ​​Abu Afsa, south of Tartus. The opposition monitor, which added on a network of informants inside Syria and has been criticized for having unclear funding sources, that Iran-backed fighters are usually at the base.

Israel has carried out hundreds of airstrikes in Syria in the last decade, mostly to stymie attempts by Iranian forces to transfer weapons to Lebanon’s Hezbollah terror group, or establish a foothold on Israel’s northern frontier.

Israeli strikes have continued in Syrian controlled airspace, which is largely by Russia, even as ties with Moscow have deteriorated in recent months.

Israel has found itself at odds with Russia, as the Jewish state increasingly supports Ukraine against Russia’s invasion, while still seeking to maintain freedom of movement in Syria’s skies.

The last strike in Syria attributed to Israel was on August 12, when two people were wounded after Israeli tanks reportedly shelled an area near the border in the Golan Heights.

On July 2, Israel reportedly attacked a site in the town of al-Hamidiyah, south of Tartus, close to the border with Lebanon.

Sure, we’ll remove all ads from your page and you’ll unlock access to some excellent Community-only content. But your support gives you something more profound than that: the pride of joining something that really matters.