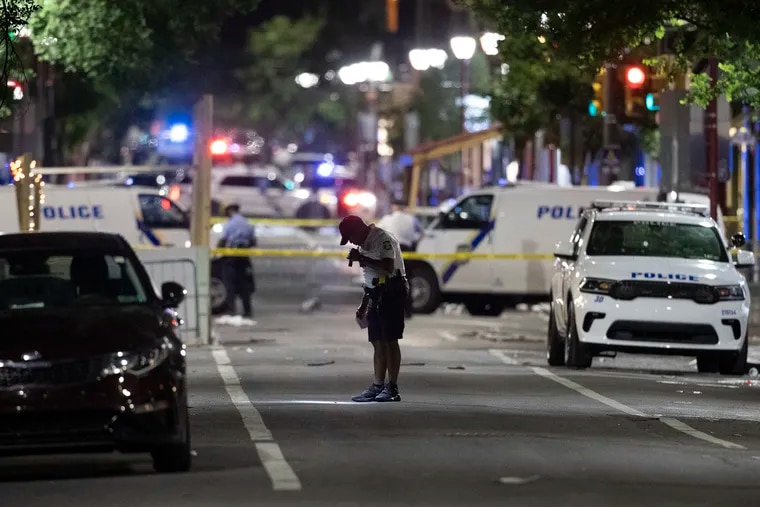 Two men have been taken into custody in connection with the mass shooting on South Street in Philadelphia, including an 18-year-old who prosecutors say fired a homemade “ghost” gun into a crowd Saturday night and was one of at least four gunmen in a melee that left three people dead and 11 wounded.

Prosecutors say that man, Quran Garner, ran off after being shot by police on South Street on Saturday. He faced other officers a few blocks away, crying out, “They shot my hand off,” before being taken to the hospital. He is now expected to face charges of attempted murder, aggravated assault, and related offenses.

Law enforcement sources said police Monday night arrested a second man, Rashaan Vereen, who they say took part in a brawl that sparked the entire violent episode. Prosecutors said Vereen, arrested in South Philadelphia, went to the aid of a gunman who was shot to death by another man in an exchange of gunfire Saturday night.

They said Vereen had spirited the gun away from his dying companion, and then melted into the South Street throng. He is expected to face similar charges to those Garner faces.

The developments came as law enforcement and friends of the victims filled in some of the gaps, but not all, in a narrative of the chaotic incident.

The gunfire drew national attention as the country undergoes a wave of mass shootings. And it claimed more victims than any single episode of gun violence in the city in at least seven years, and kept a spotlight on Philadelphia’s unrelenting shootings crisis.

As the gun violence here and in other cities across the country sparked public outrage, senators in Washington were said to be discussing potential gun legislation for the first time in years. Mayor Jim Kenney, who had been attending a national mayors conference in Reno, Nev., returned to the city Monday, though he did not speak publicly about the incident.

Meanwhile, relatives of some of the victims were in the early stages of preparing funeral arrangements.

Lorraine Quinn, whose 24-year-old daughter Alexis, a home health aide, was killed by what police believe was a stray bullet, wept when remembering her loving and caring child.

“My baby girl,” Quinn said through tears during an interview. “My only girl.”

Pescatore told reporters at an afternoon news conference that police and prosecutors had reviewed a variety of videos from the scene to try and piece together what happened.

The videos appeared to show a confrontation between groups of men on the 200 block of South Street just before 11:30 pm, she said. One group included Gregory Jackson, 34, a former professional boxer and youth coach, while the other included Micah Towns, 23, whom Pescatore said was also a boxer. Both men were armed and had carry permits for firearms, prosecutors said.

It was not clear what their beef was about, Pescatore said, or if any of the men had known each other before their paths crossed that night. But the encounter quickly grew hostile. Jackson and another man walked toward Towns in a threatening manner, Pescatore said, and Jackson appeared to draw a handgun.

As Jackson and his friend began beating Towns, pushing him back into a storefront, Jackson fired his gun, striking Towns in the body and leaving him critically wounded.

Towns, laying in the street, was able to shoot back, killing Jackson.

Jackson’s friend then tried to tend to his wounds.

Meanwhile, moments later and across the street, as people nearby started to panic, the 18-year-old Garner began firing shots from a homemade gun into the crowd. Garner appeared to have been allied with Towns before the brawl, Pescatore said. But the shots he fired came after the fight had mostly subsided, and it was not clear at whom he was shooting.

Amid the chaos, police arrived, and one officer noticed Garner firing his weapon. The officer returned fire, striking Garner in the hand and causing him to drop the gun and run away.

Garner fled to Fourth and Bainbridge Streets, where some officers had been investigating an earlier incident of gunfire in which no one was struck. Garner told them he’d been shot a few blocks away. Officers took him to Jefferson Hospital.

As all of that was happening, at least two other gunmen opened fire along nearby blocks of South Street, with panicking crowds fleeing from the sounds of gunfire, police said. Police believe as many as five gunmen could have fired shots: Jackson, Towns, and Garner, and then potentially two others nearby, where officers later found two different types of fired cartridge casings.

A wayward shot on the 300 block appears to have killed Quinn, said Homicide Capt. Jason Smith. She was found dead at the intersection of Third and South Streets.

Kristopher Minners, 22, a second-grade boys’ resident adviser at Girard College, was also likely a bystander, police said. He was fatally shot in the chest.

The surviving victims ranged in age from 17 to 69, according to police, and their conditions ranged from stable to critical.

Pescatore said investigators were still awaiting ballistics tests and other evidence to determine which shots struck which victims.

Garner, who police sources said had been arrested as a juvenile for counts including theft and gun possession, was expected to face counts including an attempted murder and aggravated assault.

Vereen would face similar charges, said Pescatore. Although he is not accused of firing a gun, Pescatore said he lied to police while trying to assist Jackson after he was shot. Video shows him quietly passing Jackson’s gun off to another while he acted “like he wasn’t involved,” she said.

Friends of Jackson’s — including at the Loyal Boyz Boxing Gym on Haverford Avenue in Overbrook Park — were stunned to hear he may have initiated an incident that became a mass shooting.

He worked with anti-violence organizations in the city and helped raise money for their work, social media shows, often posting clips or photos with their mentees. He was the father of two daughters, ages 14 and 6, and lived in Upper Darby, said John Scarborough, 42, who co-owned the Overbrook Park gym with Jackson.

Court records show he’d also been charged recently in a firearms case out of Delaware County. State Police alleged Jackson drove through a traffic stop in December 2020 while possessing an unlicensed weapon. He was charged with a gun offense over the incident last month and was scheduled to face a preliminary court hearing on Wednesday, the records show.

It was not immediately clear why charges were apparently lodged so many months after it was stopped.

Jackson’s mother did not return a call for comment Monday. But Jesse Hart, a middleweight professional boxer who lives in Germantown, said Jackson was a “humble guy” who enjoyed giving back to young people in the boxing community.

“When you’re down on South Street, you have a duty to not get in no confrontation, especially when you’re a fighter,” Hart said. “Pride and ego led to a good father and good fighter’s demise.”

David Jones, 34, whose two sons had been trained by Jackson, said: “This one situation does not describe that man at all. He put in long nights, early mornings. He went above and beyond for these kids.”

The district attorney said the investigation ongoing, with police and prosecutors still facing a host of questions, including who the other shooters were, and what charges any of them might face if identified.

As that probe continued, some witnesses said they were still struggling to process what they saw.

Ricky James, 41, who filmed the initial brawl, dropped his phone on the ground and took off running once shots rang out. “As I’m ducking and running, I’m hearing the bullets pass by my head, hitting the signs in front of me,” he said.

James said he’d been shot years ago as a younger man, and that Saturday’s episode brought back traumatic memories.

He was so scared to return to his home in Sicklerville, NJ, that when he left South Street on Saturday night, he parked on the waterfront — and slept in his car.