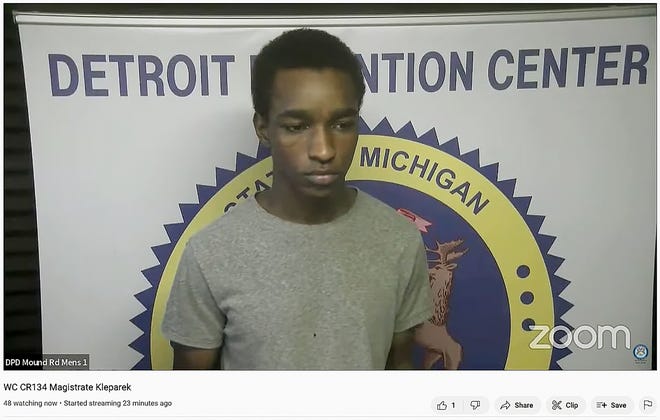 The Wayne County Prosecutor’s Office issued charges Wednesday against a man accused of gunning down four people, killing three, at random in Detroit on Sunday morning.

Dontae Ramon Smith, 19, is charged with three counts of first-degree murder; five counts of carrying a firearm while committing a felony; one count of assault with intent to murder, and a count of torturing an animal.

The dog was also shot during the shooting spree.

Smith pleaded not guilty on all charges during an arraignment hearing Wednesday afternoon. He was being held at the Wayne County Jail and was denied bond on the murder charges.

“It is not an overstatement to say that on Sunday morning, August 28, like a scene out of a movie this alleged defendant reigned real terror on the citizens northwest Detroit. Normal, everyday life was brought to a standstill as he moved east to his next victim,” Worthy said in a statement.

Police believe Smith may be suffering from mental illness. Smith does not appear to have a violent criminal history, according to court records.

Smith was apprehended Monday evening at his home in the 7300 block of Pembroke Avenue without further incident. His arrest followed a multi-agency manhunt led by Detroit police, with help from surveillance footage, community members and someone close to the suspect who felt police a tip.

Ballistic analysis matched a 9mm gun recovered at Smith’s home to bullets found at the crime scenes, according to police.

More:Man and dog saved by neighbors who intervened amid Detroit shooting spree

While the suspected gunman was on the loose, Detroit communities were “terrorized,” especially fearful for children who were preparing for their first day of school Monday, Detroit Police Chief James White said during a Monday news conference. Police had not determined a reason and said the shootings appeared randomly.

Smith is charged with shooting his first victim at 4:45 am near Seven Mile Road and Wyoming Avenue. A 28-year-old man, Chayne Lewis Lee, was and fatally shot multiple times pistol, according to Detroit Police Cmdr. Michael McGinnis.

Police believe Smith walked away after firing at Lee, then walked back and fired more rounds at him, McGinnis said.

“It is alleged that Defendant Smith shot Mr. Lee multiple times, and when he fell to the ground, Smith continued to shoot Mr. Lee. His lifeless body was discovered lying in the doorway of a church by Detroit police officers. It is alleged that the defendant walked away from the scene,” Assistant Prosecuting Attorney Maria Miller said in a Wednesday news release.

Detroit police did not receive a 911 call for that incident, McGinnis said.

Police received the first call of shots fired about 30 minutes later and about three blocks away. Officers discovered an unidentified woman laying on the sidewalk, suffering from gunshot wounds. The woman, who was killed, was first discovered by a neighbor. Police are seeking help from the community to identify the victim, described as a Black woman in her 40s who lives near Wyoming and Margareta avenues.

A third victim, LaRi Jobina Brisco, was gunned down while waiting for a ride at a U-Haul rental location on Livernois Avenue. She had plans to move that day. After firing multiple rounds at Brisco, Smith allegedly stepped away from her and fired additional shots into her.

Brisco is described by loved ones as a “a proud and dedicated single mother of five and grandmother to two,” according to a GoFundMe fundraising page created in her memory.

The fourth and final victim, John Palik, 76, was shot in the leg about 7:10 am a few blocks from Livernois Avenue, in the 19200 block of Pennington Drive. He was walking his dog from him, Kingston, who was shot in the paw. Both survived.

Palik told the Free Press his neighbors saved his life. He’s thankful to be alive.

More:Man and dog saved by neighbors who intervened amid Detroit shooting spree