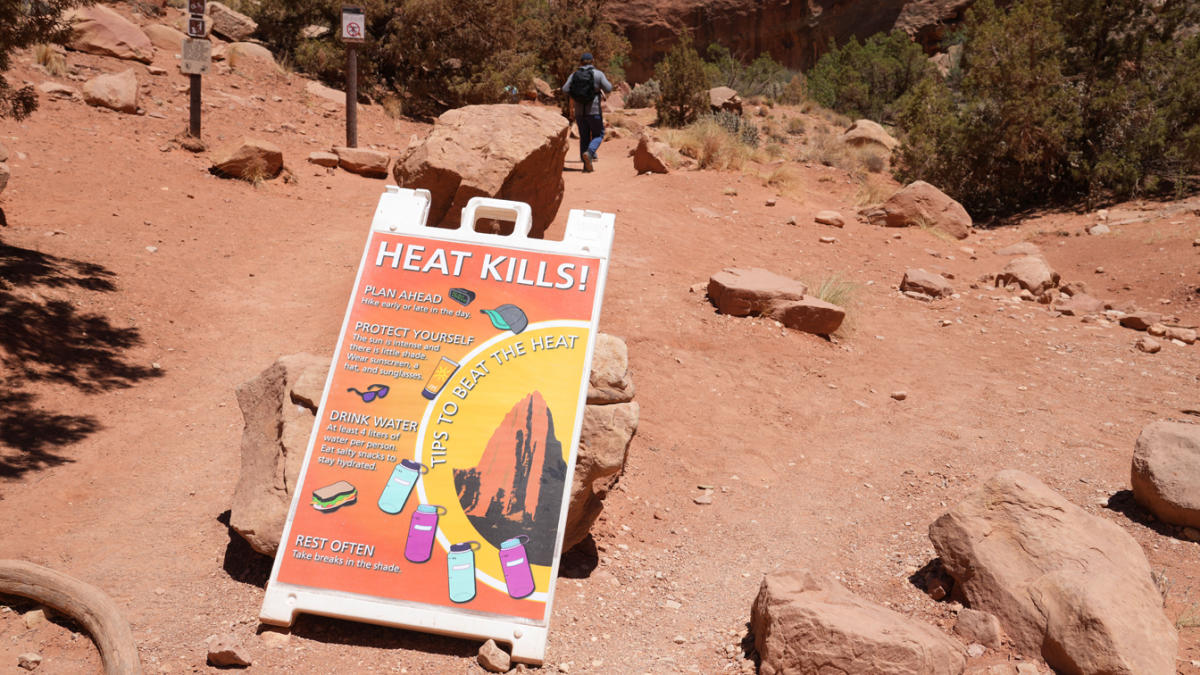 The Southwest suffered through another intense heat wave over the weekend, with Denver, Las Vegas and Phoenix all posting record high temperatures over 100 degrees Fahrenheit on Saturday. Death Valley, in California, reached a record high for June 11 of 122 degrees. In Las Vegas, the mercury rose to a record-setting 109 degrees two days in a row. Then the heat dome moved eastward, with a high temperature of 96 degrees in the Twin Cities of Minnesota.

“Now the heat dome is languishing over the Tennessee Valley and bringing highs of 95 to 100 degrees from the Corn Belt to the Carolinas, with exceptional humidity in the Midwest exacerbating just how sultry it feels,” the Washington Post reported on Wednesday afternoon. “High humidity levels are contributing to heat index values ​​pushing 115 degrees in spots.”

This dramatic heat wave before summer has even officially begun is not a freak occurrence; it’s an increasingly common, and dangerous, condition due to climate change. A 2019 study found that severe heat events per year in Las Vegas increased from an average of 3.3 events per year from 2007-2009 to 4.7 per year from 2010-2016. Since 2017, 570 people have died of heat-related deaths in Clark County, which includes Las Vegas, up from 241 heat-related deaths in the previous five years, according to the Southern Nevada Health District.

Residents of some of the hottest cities say extreme heat is having a devastating impact, especially on the most disadvantaged residents.

Jose Rivera, a 21-year-old resident of Las Vegas, said he has seen a change in his own short lifetime. Rivera goes door-to-door to help his mother sell homemade buñuelos, a fried dough fritter from Latin America.

“Our whole life of living in this region, it’s been only hotter,” said Shaina Oliver, a tribal member of the Navajo Nation who lives in Denver and works with Moms Clean Air Force, an environmental advocacy organization. “We keep breaking our own record every year.” Of the 15 years with the most 100-degree-plus days in Denver, 11 are in the 21st century.

The heat is especially hard on lower-income residents, who may lack air-conditioning.

“I’ve met a couple of street vendors — for example, Mary, who washes cars — I was talking to her about ‘how do you deal with the heat?’” Rivera said. “She said, ‘We splash ourselves with water so we do n’t pass out.’” (He did n’t share her her last name.)

But Mary doesn’t have a working air conditioner. “She said, ‘It’s been two years that our air conditioner has been broken down. We can barely make rent, and now we have to fix our air-conditioning, which is not possible,’” Rivera recounted. “Ela She has to work outside all day and then go home to a house with no AC.”

Those who lack air-conditioning are often unable to go about their regular activities due to the extreme heat. “People that are brown, Indigenous, Latino, Black, most of the households we occupy are old buildings that were never renovated, never updated,” Oliver said.

“I don’t know whether you’ve been in over-110-degree weather, but it’s like walking into your oven,” Hazel Chandler, Phoenix-based field coordinator for Moms Clean Air Force, told Yahoo News. “Many can’t afford to turn [air-conditioning] on because they just can’t afford the bills, especially on houses that have substandard insulation and lack decent windows, the bills are just horrendous for air-conditioning.”

Lower-income neighborhoods also tend to have a more severe urban heat island effect due to lack of shade and green space.

“A lot of our communities, we don’t have that much greenery,” OIiver said. “There’s a lot of dirt more than grass.”

“In Colorado, we have a bad issue with ozone pollution, and it increases the heat rises,” Oliver told Yahoo News. “We have many days of ozone alert, where we have to stay inside due to excessive heat and, due to that heat, our ozone pollution standards are off the charts.”

“The air quality has been terrible these recent days,” Rivera said. “I notice the difference from years back.”

This is especially true in poorer neighborhoods, which tend to have worse air quality, as they are frequently near highways or polluted industrial sites.

Higher temperatures and driver foliage are also leading to earlier and more widespread wildfires throughout the West. By April 23, there were more than 20 wildfires burning in 16 of New Mexico’s 33 counties. The smoke from wildfires also worsens air pollution, and — in a vicious feedback loop — it intensifies climate change by destroying plants that would otherwise absorb carbon dioxide.

All of these problems are only set to get worse if climate change continues unabated. According to the Intergovernmental Panel on Climate Change, additional warming will mean more frequent and severe heat waves. Historically, there have been an average of 12 days per year in Nevada with a heat index above 90 degrees, but a study from the Union of Concerned Scientists found that this number could jump to 39 days per year by 2050 and 68 by the end of this century.

Activists in the Southwest say both mitigating climate change and adapting to it are necessary to prevent more heat-related deaths.

“We’ve got to tackle climate change,” Chandler said. “We need bold climate action to happen and funding from the federal government to help us start to transition to a sustainable energy system. But the second thing we’ve got to do is we’ve got to fund programs that will help us bring these homes up to standard: cooler roofs, insulation, heat pump air-conditioning that can help keep those [energy] bills lower.”

Global temperatures are on the rise and have been for decades. Step inside the data and see the magnitude of climate change.