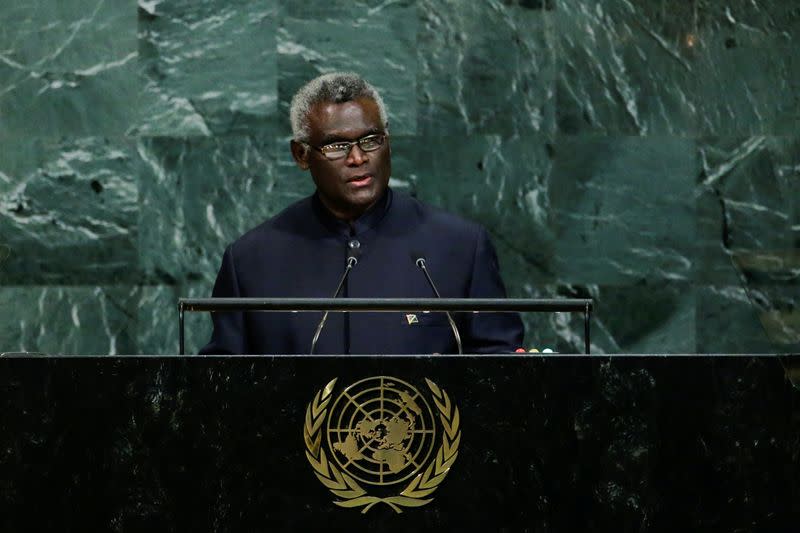 SYDNEY (Reuters) – Amid a regional backlash, the Solomon Islands said it would not allow a Chinese military base in the Pacific islands nation despite its plans to sign a security pact with Beijing.

A day after officials from the two countries initialled a draft agreement on security, the office of Solomon Islands Prime Minister Manasseh Sogavare said on Friday the agreement does not invite China to establish a military base.

“Government is conscious of the security ramification of hosting a military base, and it will not be careless to allow such initiative to take place under its watch,” the statement said.

Sogavare has not released details of the security agreement with China, amid concern sparked by a leaked draft that allowed Chinese navy ships to replenish in the islands. Ministers have not yet signed it.

The leader of the Federated States of Micronesia on Thursday urged the Solomon Islands not to sign the security pact, saying he had “grave security concerns” and feared the Pacific could become embroiled in war between China and the United States.

China had established 20 points of military presence in the South China Sea despite telling the United States it would not militarize the region, and Canberra feared Beijing was on a similar pathway in the Pacific islands, Dutton said in an interview with Sky News.

“They want a military port in PNG [Papua New Guinea]. They’ve got one in Sri Lanka, and they’re obviously looking at other places where they can put them,” he said.

A Chinese military base in the Solomon Islands would prompt Australia to significantly increase its military deployment to the region because it the islands are very close to Australia, he said.

“The Chinese are incredibly aggressive. The tactics that they’re deploying into small island nations is quite remarkable,” he added.

China’s foreign ministry said on Thursday “the China-Solomon islands security cooperation does not target any third party and does not conflict with other countries”, and the agreement covered social order, protecting lives and property, and natural disaster response.