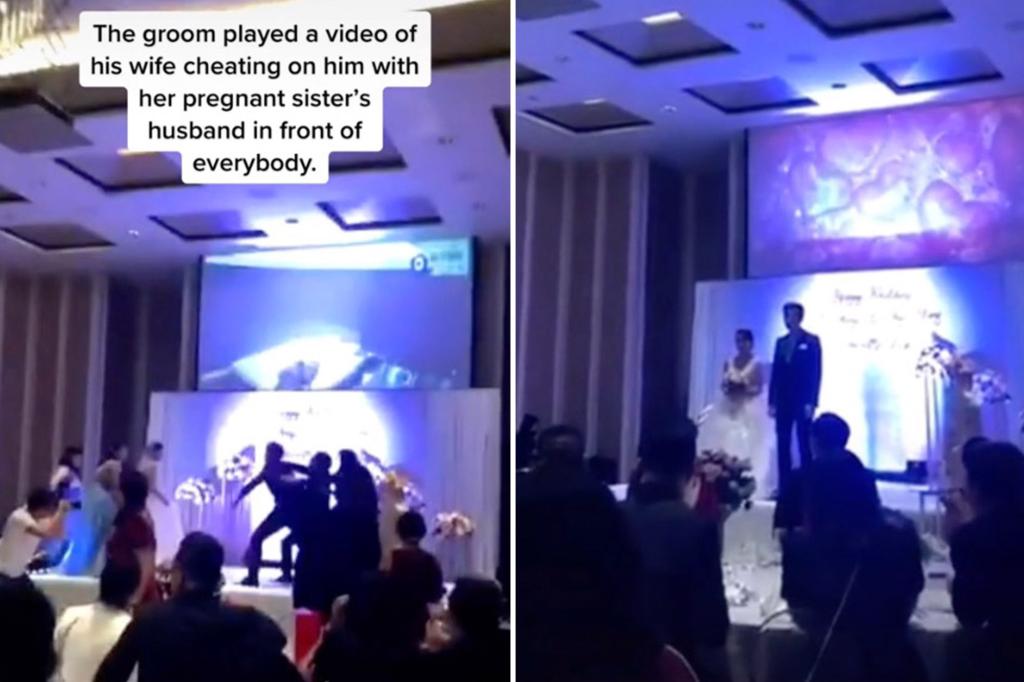 Footage of a groom exposing his bride’s affair on their wedding day by playing an X-rated video of her in bed with another man has left the internet in shock.

Guests of the newlyweds in China can be seen looking on in horror as a steamy bedroom scene featuring the bride and her new husband’s brother-in-law plays out from a projector at the couple’s reception.

The disgraced woman then throws her bouquet at her husband as he can be heard shouting: “Did you think I didn’t know about this?”

The clip originally went viral in 2019, but was recently shared again on TikTok where it has clocked up almost six million views and thousands of comments from outraged viewers.

“Cheating bride,” the video is captioned.

Text written over the top of the footage reads: “The groom played a video of his wife cheating on him with her pregnant sister-in-law’s husband in front of everybody.”

But reaction over the groom’s act of revenge has left social media users divided.

Most were on the man’s side, stating the bride “got what she deserved”.

“Best revenge – in front of all their family and friends,” one user commented.

“Honesty, I am this petty and would 1000 percent of this,” another said.

“Man stood there knowing the calamity he’s about to cause,” someone else wrote.

Others however were confused why the man went through with the wedding.

“Isn’t this at the party so doesn’t that mean they already said I do?” one person said.

“Why’d he go through with the wedding?” another asked.

“So why did he waste all that money on the wedding?” one man wrote.

Many tried to explain the move, stating it’s very hard to get deposits back from wedding venues once booked.

“Maybe he found out too late and the wedding needed to be paid for regardless of whether they broke it off,” one reasoned.

“Satisfaction people. Embarrassing her in front of everyone was probably worth it for him,” another stated.

Meanwhile, others turned their attention to the bride, labeling her move to throw her flowers at the groom “wild”.

“And SHE’S the one that gets mad at the end?” one person wrote.

“Not her throwing the flowers at him, the audacity,” another said.

The couple had been together for two years and were engaged for six months before their big day, Asia One reported at the time.

It was also claimed the bride “suffered domestic violence” at the hands of the groom and had sought comfort with his sister’s husband.

However over time, things evolved into an illicit relationship, and once the groom found out he decided to “humiliate” his bride.