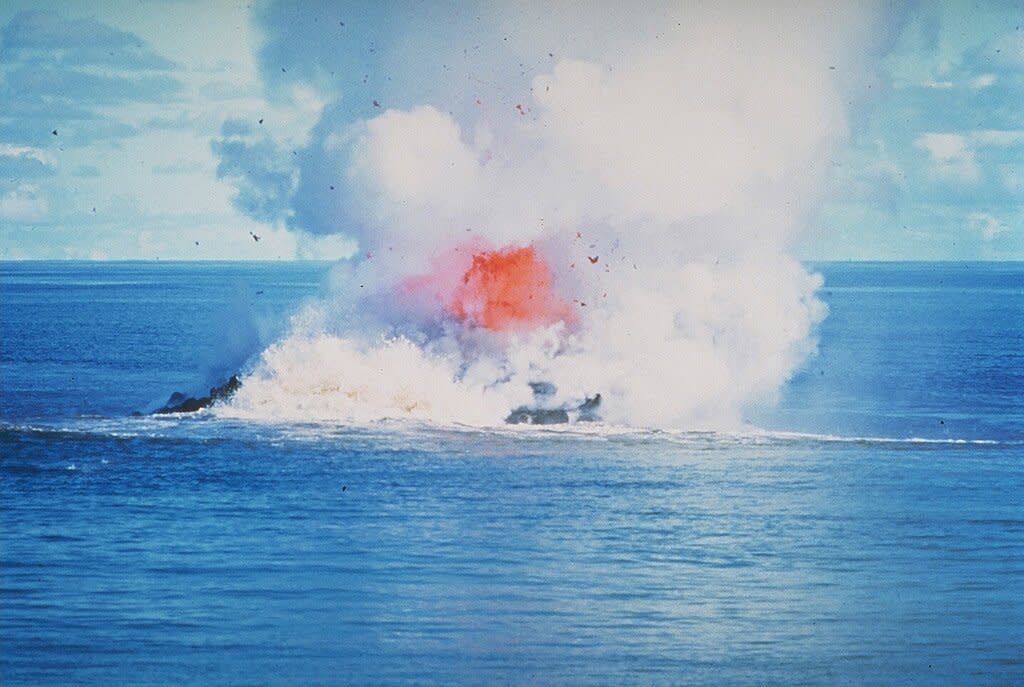 Stranger things have happened, for sure. But this could be a first for many.

According to scientists, an active underwater volcano in the Pacific has started to erupt, spewing smoke and ash — plus, quite possibly, fragments of the highly adaptable sharks that live inside it — sky-high into the atmosphere.

NASA recently released satellite images showing the Kavachi Volcano, located near the Solomon Islands in the Pacific, east of New Guinea, spouting huge plumes of water from the crater that has been dubbed the “Sharkcano.”

The volcano earned this memorable moniker in 2015, when scientists were shocked to find two species of sharks, including hammerheads, living — and thriving — in the hot, acidic, sulfur-laden water in the craterlocated deep in the ocean, according to NASA Earth Observatory.

“Populations of gelatinous animals, small fish, and sharks were observed inside the active crater, raising new questions about the ecology of active submarine volcanoes and the extreme environments in which large marine animals can exist,” the scientists wrote in 2016 in the article.

Never miss a story — sign up for PEOPLE’s free daily newsletter to stay up-to-date on the best of what PEOPLE has to offer, from juicy celebrity news to compelling human interest stories.

The January 2015 expedition to the Kavachi Volcano, which is about 15 miles south of Vangunu Island in the Solomon Sea, “was serendipitously timed with a rare lull in volcanic activity that permitted access to the inside of Kavachi’s active crater and its flanks,” the scientists wrote.

RELATED: Woman Whose Dad and Sister Were Killed in New Zealand Volcano Eruption Marks Her ‘Burnversary’

The volcano entered an eruptive phase in October 2021, according to the Smithsonian Global Volcanism Program.

NASA released satellite images of the volcano erupting on May 14, showing discolored water around the volcano several times between April and May 2022, the NASA Earth Observatory reported.

According to the Smithsonian Global Volcanism Program, the volcano began erupting in October 2021.