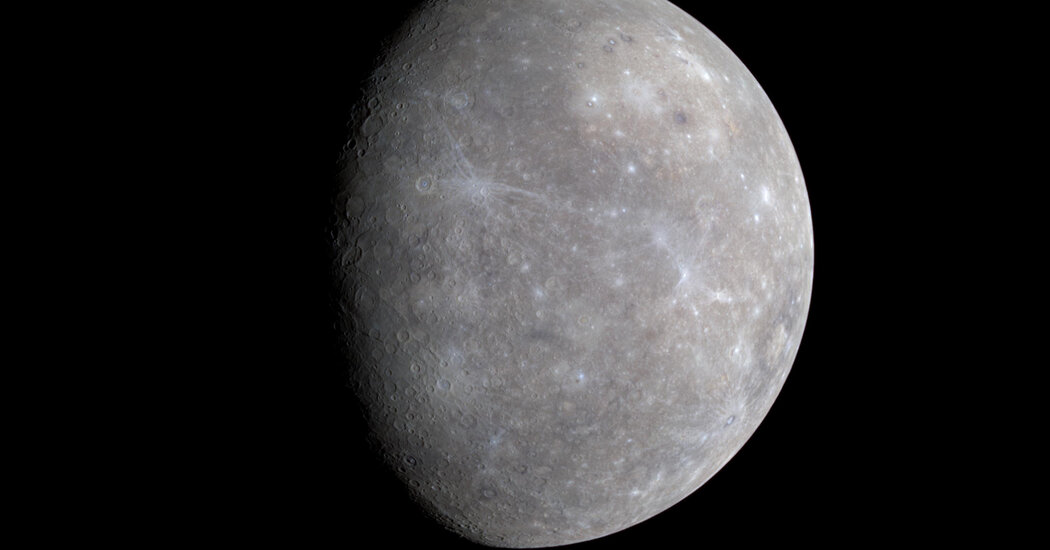 Mercury does not make sense. It is a bizarre hunk of rock with a composition that is unlike its neighboring rocky planets.

“It’s way too dense,” said David Rothery, a planetary scientist at the Open University in England.

Most of the planet, the closest to the sun, is taken up by its core. It lacks a thick mantle like Earth has, and no one is quite sure why. One possibility is that the planet used to be much bigger — perhaps twice its current bulk or more. Billions of years ago, this fledgling proto-Mercury, or super Mercury, could have been hit by a large object, stripping away its outer layers and leaving the remnant we see behind.

While a nice idea, there has never been direct evidence for it. But some researchers think they have found something. In work presented at the Lunar and Planetary Science Conference in Houston in March, Camille Cartier, a planetary scientist at the University of Lorraine in France, and colleagues said pieces of this proto-Mercury may be hiding in museums and other meteorite collections. Studying them could unlock the planet’s mysteries.

“We don’t have any samples of Mercury” at the moment, said Dr. Cartier. Gaining such specimens “would be a small revolution” in understanding the natural history of the solar system’s smallest planet.

According to the Meteoritical Society, nearly 70,000 meteorites have been collected around the world from places as remote as the Sahara and Antarctica, finding their way into museums and other collections. Most are from asteroids ejected from the belt between Mars and Jupiter, while more than 500 come from the moon. More than 300 are from Mars.

Noticeably absent from these documented space rocks are confirmed meteorites from our solar system’s innermost planets, Venus and Mercury. It is typically hypothesized that it is difficult, although not impossible, for detritus closer to the sun and its gravity to make their way farther out into the solar system.

Among a small number of meteorite collections are a rare type of space rock called aubrites. Named after the village Aubres in France, where the first meteorite of this type was found in 1836, aubrites are pale in color and contain small amounts of metal. They are low in oxygen and seem to have formed in an ocean of magma. About 80 aubrite meteorites have been found on Earth.

For these reasons, they seem to match scientific models of conditions on the planet Mercury in earlier days of the solar system. “We have often said that aubrites are very good analogues for Mercury,” Dr. Cartier said.

But scientists have stopped short of saying they are actually pieces of Mercury. Klaus Keil, a scientist at the University of Hawai’i at Manoa who died in February, were argued in 2010 that aubrites more likely to have originated from other kinds of asteroids than something that was ejected from Mercury, with some scientists favoring a group of asteroids in the belt called E-type asteroids. Among his evidence were signs that aubrites had been blasted by the solar wind — something Mercury’s magnetic field should have protected against.

Dr. Cartier, however, has another idea. What if aubrites originally came from Mercury?

Following from the hypothesis that a sizable object collided with a younger Mercury, Dr. Cartier said a large amount of material would have been thrown into space, about a third of the planet’s mass. A small amount of that debris would have been pushed by the solar wind into what is now the asteroid belt, forming the E-type asteroids.

There, the asteroids would have remained for billions of years, occasionally smashing together and being continually blasted by the solar wind, explaining the solar wind seen in aubrites. But eventually, she suggested, some pieces were pushed toward Earth and fell to our planet as aubritic meteorites.

Low levels of nickel and cobalt found in aubrites match what we would expect from the proto-Mercury, Dr. Cartier says, while data from NASA’s Messenger spacecraft that orbited Mercury from 2011 to 2015 supports similarities between Mercury’s composition and aubrites.

“I think aubrites are the shallowest portions of the mantle of a large proto-Mercury,” Dr. Cartier said. “This could solve the origin of Mercury.”

If true, it would mean that we had pieces of Mercury — albeit a much more ancient version of the planet — hiding in drawers and display cases for more than 150 years.

“It would be fantastic,” said Sara Russell, a meteorite expert at the Natural History Museum in London, who was not involved in Dr. Cartier’s work from him. The museum has 10 aubrites in its collection.

Other experts have reservations about the hypothesis.

Jean-Alix Barrat, a geochemist at the University of Western Brittany in France and one of the few aubrite experts in the world, does not think there is enough aubritic material in meteorite collections to work out whether their contents match with models of the super Mercury .

“The authors are a little bit optimistic,” he said. “The data they use is not sufficient to validate their conclusions.”

In response, Dr. Cartier said she removed possible contaminating rocks from her dela aubrite samples to get representative levels of nickel and cobalt, which she was “confident” are correct.

Jonti Horner, an expert in asteroid dynamics from the University of Southern Queensland in Australia, was also not sure whether material from Mercury could enter a stable orbit in the asteroid belt and hit Earth billions of years later. “It just doesn’t make sense to me from a dynamics point of view,” he said.

Christopher Spalding, an expert in planet formation at Princeton University and a co-author of Dr. Cartier’s study, says his modeling him shows the solar wind push material away from Mercury sufficiently to link it to E-type steroids.

“The young sun was highly magnetic and spinning fast,” he said, turning the solar wind into a “whirlpool” that could send pieces of Mercury to the asteroid belt. Another possibility, yet to be modeled, is that the gravitational hefts of Venus and Earth scattered the material further out before some worked its way back to our planet.

Dr. Cartier’s proposal could be put to the test soon. A joint European-Japanese space mission called BepiColombo is currently on its way to orbit Mercury in December 2025. Dr. Cartier presented her idea to a group of BepiColombo scientists in early May.

“I was impressed by it,” said Dr. Rothery, a member of the BepiColombo science team. He said their mission could look for evidence of nickel in Mercury’s surface that would link the planet more conclusively to collected aubrites.

It will not be “straightforward,” he notes, given that Mercury’s surface today will only resemble what is left behind from the proto-Mercury. But he said the results would “help feed into the modeling.”

Willy Benz, an astrophysicist from the University of Bern in Switzerland who first proposed the idea of ​​a proto-Mercury, says that if aubrites do come from Mercury, they will add to evidence of an active and violent early solar system.

“It will show that giant impacts are quite common,” he said, and that they “play an important role in shaping the architectures of planetary systems.”

Dr. Cartier is further testing her ideas by melting some aubrite samples under high pressure. If these experiments and the data from BepiColombo bolster her hypothesis, aubrites may suddenly be promoted from an oddity in our meteorite collections into some of the most remarkable meteorites ever collected — pieces of the solar system’s innermost world.