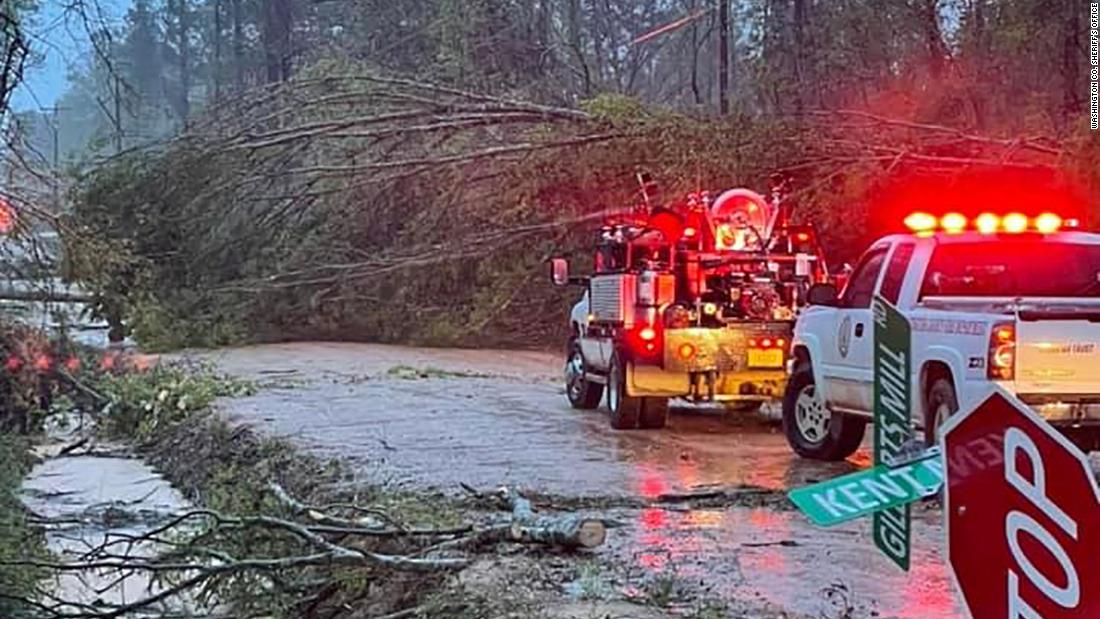 “There’s a total destruction of homes in that area,” Kolmetz told CNN. The conditions of the two injured people were not immediately available.

At least one tornado was reported before sunrise in an eastern portion of Washington County, about a 45-minute drive north-northeast of Panama City, according to the National Weather Service.
From the nearby city of Chipley, Jonathan Leonberger recorded video of a large funnel cloud in the distance during Thursday morning’s storm, he said. Lightning periodically illuminated the funnel cloud in what was otherwise darkness in the video posted on Facebook.
That was one of at least 30 tornado reports made from Texas to Florida from Wednesday morning to early Thursday — from a series of storms that also injured seven people in Arkansas.

More severe storms and strong winds are still possible Thursday across a swath of the country’s eastern third.

Wind gusts of 40 mph or higher could hit states from Florida, Georgia and the Carolinas to parts of Michigan, Ohio and New York, creating chances of downed tree limbs and power lines, the National Weather Service said.
Also, severe storms are possible from Florida to Vermont and New Hampshire, with varying degrees of risk. The highest risk of the day — enhanced, or level 3 of 5 — exists for northern Virginia, central Maryland and parts of central and eastern Pennsylvania, the Storm Prediction Center said.

A tornado watch for portions of the Carolina is in effect until 8 pm ET.

The watch covers more than 5 million people, including residents off Raleigh, North Carolina; Richmond, Virginia; and Ocean City, Maryland. A few tornadoes, marble size hail and damaging thunderstorm wind gusts of 70 mph are possible, according to the SPC.

Storms, with suspected tornadoes, damaged buildings in the South

Storms left damage in several parts of the South.

Strong winds — possibly a tornado — hit Springdale, Arkansas, around 4 am Wednesday, Mayor Doug Sprouse said in a Facebook post. The city’s southeast bore the brunt of the storm, according to local officials, who said there were reports of downed power lines, trees and traffic lights.
Seven people were injured in Springdale, including two critically, Sprouse said.
Buildings were flattened, roofs were damaged and yards were covered with storm debris, according to video from CNN affiliate KHBS/KHOG.

The gym at George Elementary School was destroyed, and the kitchen and cafeteria were severely damaged, the Springdale School District said.

“Many residents have been displaced from their homes and numerous businesses have reported significant damages,” Sprouse said.

Reports of tornadoes or damaging winds across the South picked up Wednesday afternoon and night.

In Alabama, one person suffered a minor injury from severe weather at the University of Montevallo, about 35 miles south of Birmingham, the school said. The area had been under a tornado warning that night. Details about how the injury happened weren’t immediately available.

“We are thankful that this week was a spring break and that very few people were on campus during tonight’s storms,” ​​the school said on Twitternoting it was still doing a full damage assessment.

High winds ahead of the storm system helped fuel a brush fire in Sevier County, Tennessee. At least one person was injured, and the flames had burned through at least 1,000 acres, county officials said. At least 35 structures have been affected.

The previous March record was set just last year, when 191 tornadoes were reported across the country. The third-highest total for March was in 2017, with 187.

Most tornadoes in the US happen from April to May, although scientists have tracked a tendency toward more tornadoes occurring earlier in the year, likely as a function of climate change, as well as influences from La Niña.