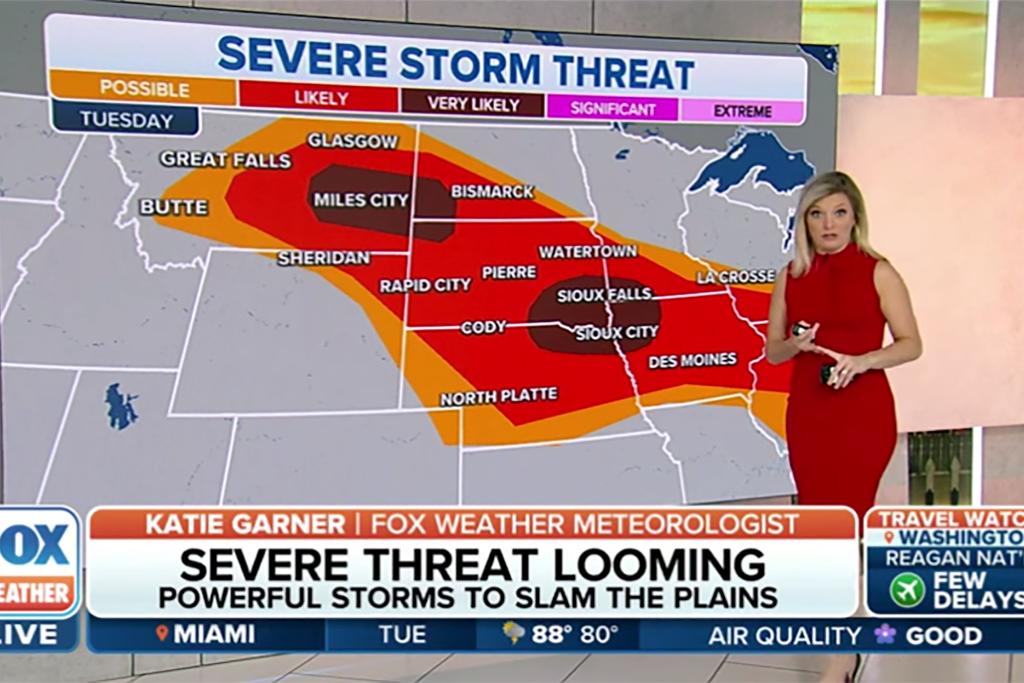 The threat of severe thunderstorms will continue in parts of the northern and eastern US each day through Sunday along the periphery of a large dome of high pressure causing massive heat wave from the Plains to the Southeast.

Wednesday’s storms will be more scattered than Tuesday’s derecho that stretched hundreds from the Plains into the Midwest. The widespread severe weather event produced gusts to nearly 100 mph in South Dakota and hail larger than tennis balls in Nebraska.

July is the nation’s second-most-active month for damaging thunderstorm winds, so it’s not all that uncommon for a right to form at this time of year.

Here’s what to expect from Wednesday into the weekend.

Two areas of severe thunderstorms are expected Wednesday: one in parts of the northern and central Rockies and Plains, and another from the portions of the Midwest and Ohio Valley into the Carolinas.

Damaging wind gusts and large hail are the primary threats.

Two areas of scattered severe thunderstorms are possible Thursday: one in parts of the northern Rockies and Plains, and another from the lower Ohio Valley into the southern mid-Atlantic and Southeast.

Damaging wind gusts and large hail are the main threats.

The greatest threat of scattered severe thunderstorms on Friday will be across parts of the northern Rockies and Plains.

Damaging wind gusts and large hail are the primary concerns.

An organized severe weather threat could materialize from Saturday evening into Saturday night across the northern Plains.

Damaging winds and large hail are the main threats, but a few tornadoes are also possible.

A continuation of Saturday night’s severe storms is expected on Sunday from the northern Plains into the Upper Midwest.

Damaging winds and large hail are the primary hazards, though an isolated tornado can’t be ruled out.

High pressure associated with the massive heat wave in the central US will effectively act as a block, with showers and storms tracking along its northern and eastern periphery this week. As a result, multiple rounds of thunderstorms could move over the same locations from the Plains to the mid-Atlantic on each of the next few days.

By the end of the week, a large area of ​​3 to 5 inches of rain is likely, with isolated spots possibly picking up as much as 8 inches. Some flash flooding is possible, especially in urban and poor-drainage areas, but in general, the rain is expected to be very beneficial for two drought-stricken regions.

A “flash drought” – which, as the name suggests, is the “rapid onset or intensification of drought” – is beginning to develop in parts of the Midwest and Corn Belt states.

Some locations there have seen almost no rain in the past two weeks and only between 30 and 50% of their average rainfall over the past 30 days. But that should change this week with the expected showers and thunderstorms.

Locally heavy rain is also expected to reach as far east as the Carolinas, where drought conditions have been expanding.

The drought is most severe in eastern portions of North and South Carolina. Drought conditions actually started there in February.

Tropical Storm Colin brought some drought relief this past weekend, especially in South Carolina, but the rain this week will cover a much larger area.