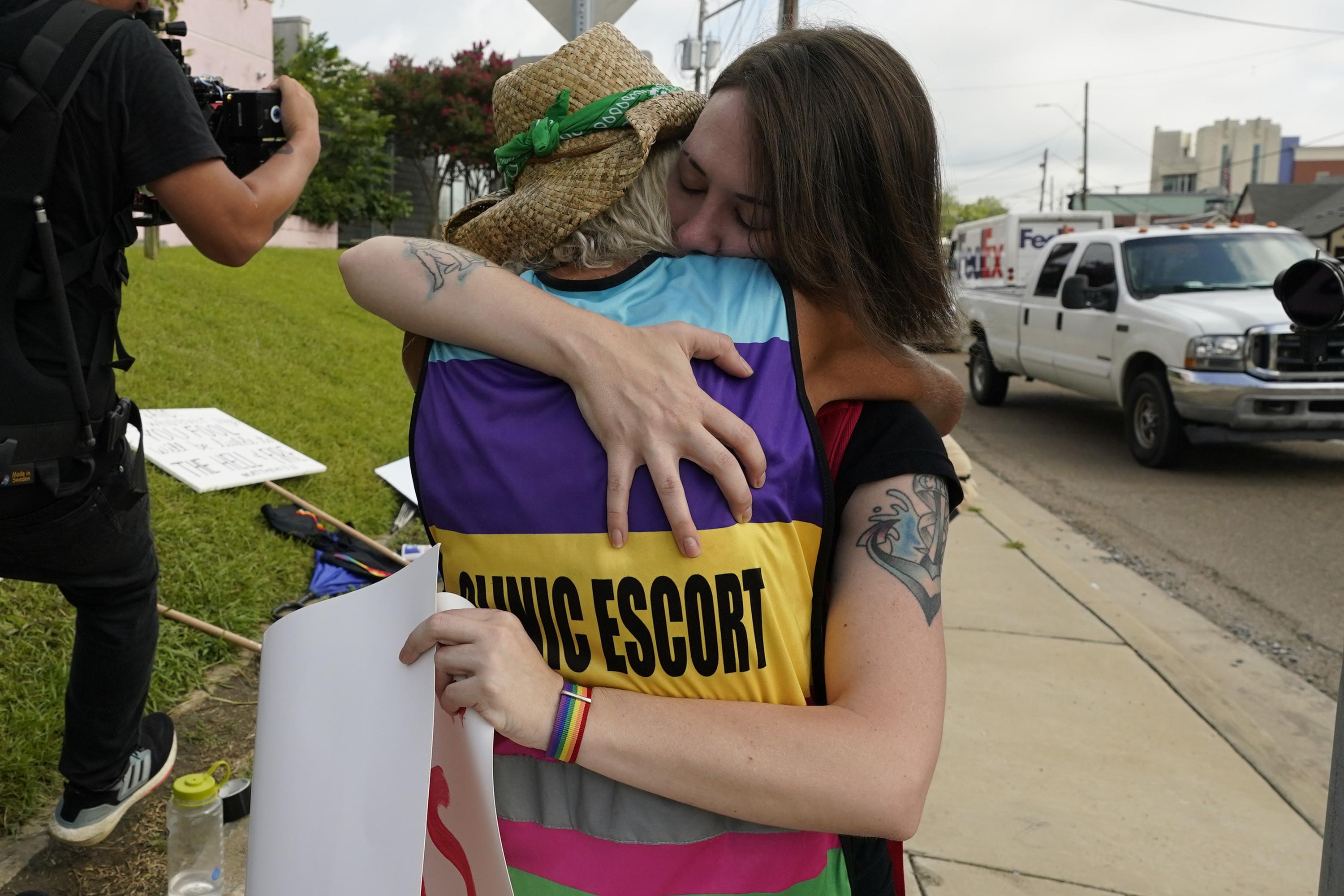 JACKSON, Miss. (AP) — Mississippi’s only abortion clinic has been buzzing with activity in the chaotic days since the US Supreme Court upended abortion rights nationwide — a case that originated in this conservative Deep South state, with this bright-pink medical facility that is closing its doors Wednesday.

Physicians at Jackson Women’s Health Organization have been trying to see as many patients as possible before Thursday, when, barring an unlikely intervention by the state’s conservative Supreme Court, Mississippi will enact a law to ban most abortions.

Amid stifling summer heat and humidity, clashes intensified Wednesday between anti-abortion protesters and volunteers escorting patients into the clinic, best known as the Pink House.

When Dr. Cheryl Hamlin, who has traveled from Boston for five years to perform abortions, walked outside the Pink House, an abortion opponent used a bullhorn to yell at her. “Repent! Suddenly!” shouted Doug Lane.

Abortion access has become increasingly limited across wide swaths of the US as conservative states enact restrictions or bans that took effect when the Supreme Court overturned Roe v. Wade, the landmark 1973 ruling that legalized abortion nationwide.

The court, reshaped by three conservative justices appointed by former President Donald Trump, issued the ruling June 24. But the Mississippi clinic has been inundated with patients since September, when Texas enacted a ban on abortion early in pregnancy.

Cars with license plates from Texas, Mississippi, Louisiana, and Arkansas have been driving through Jackson’s Fondren neighborhood to bring women and girls—some of whom appeared to be teenagers—to the Pink House. Drivers parked on side streets near the clinic in the shade of pink and purple crepe myrtles, their car air-conditioners blasting as they waited.

Diane Derzis, who has owned the Mississippi clinic since 2010, drove to Jackson to speak at the Pink House hours after the Supreme Court ruling overturning Roe v. Wade.

“It’s been such an honor and a privilege to be in Mississippi. I’ve come to love this state and the people in it,” Derzis told those gathered in the sweltering heat.

The Supreme Court ruling was in a case called Dobbs v. Jackson Women’s Health Organization — the clinic’s challenge of a 2018 Mississippi law to ban most abortions after 15 weeks. The Pink House had been doing abortions through 16 weeks, but under previous US Supreme Court rulings, abortion was allowed to the point of fetal viability at about 24 weeks.

Mississippi’s top public health official, Dr. Thomas Dobbs, was named in the lawsuit, but has not taken a public position about the case. The state’s Republican attorney general urged justices to use the case to overturn Roe v. Wade and give states more power to regulate or ban abortion.

Derzis told The Associated Press after the ruling that she did not regret filing the lawsuit that eventually undercut nearly five decades of abortion case law.

“We didn’t have a choice. And if it hadn’t been this lawsuit, it would have been another one,” said Derzis, who also owns abortion clinics in Georgia and Virginia, and lives in Alabama.

The Mississippi clinic uses out-of-state physicians like Dr. Hamlin because no in-state doctors will work there.

As the Pink House prepared to close, Dr. Hamlin said she worries about women living in deep poverty in parts of the state with little access to health care.

Shannon Brewer, the Pink House director, agrees low-income women will be most affected by being unable to get in-state abortions.

Brewer told the AP the anti-abortion protesters know her by name and yell at her but she tunes them out.

“They don’t say a lot to me anymore other than, you know, ‘You’re coming to work to kill babies,’” Brewer said. “I’ve been here for 20-something years. So, it’s like when I get out of the car I don’t really hear it because it’s like the same thing over and over and over again.”

Some staffers were expected to be in the Pink House on Thursday for paperwork ahead of its closure, but no procedures.

With the Mississippi clinic closing, Derzis and Brewer will soon open an abortion clinic in Las Cruces, New Mexico, about an hour’s drive from El Paso, Texas, — calling it Pink House West. Hamlin said she is getting licensed in New Mexico so she can work there.

Mississippi and New Mexico are two of the poorest states in the US, but have vastly different positions on abortion politics and access.

Home to a Democratic-led legislature and governor, New Mexico recently took an extra step to protect providers and patients from out-of-state prosecutions. It’s likely to continue to see the steady influx of people seeking abortions from neighboring states with more restrictive abortion laws.

One of the largest abortion providers in Texas, Whole Woman’s Health, announced Wednesday that it is also planning to reopen in New Mexico in a city near the state line, to provide first- and second-trimester abortions. It began winding down operations in Texas after a ruling Friday by the state Supreme Court that forced an end to abortions at its four clinics.

Standing outside the Mississippi clinic on June 24, Derzis was pragmatic about the future of the building she had painted bright pink several years ago.

“This building will be sold and maybe someone will knock it down and make a parking lot here,” Derzis said. “And that will be sad, but she served her purpose for her and many women had their abortions here.”