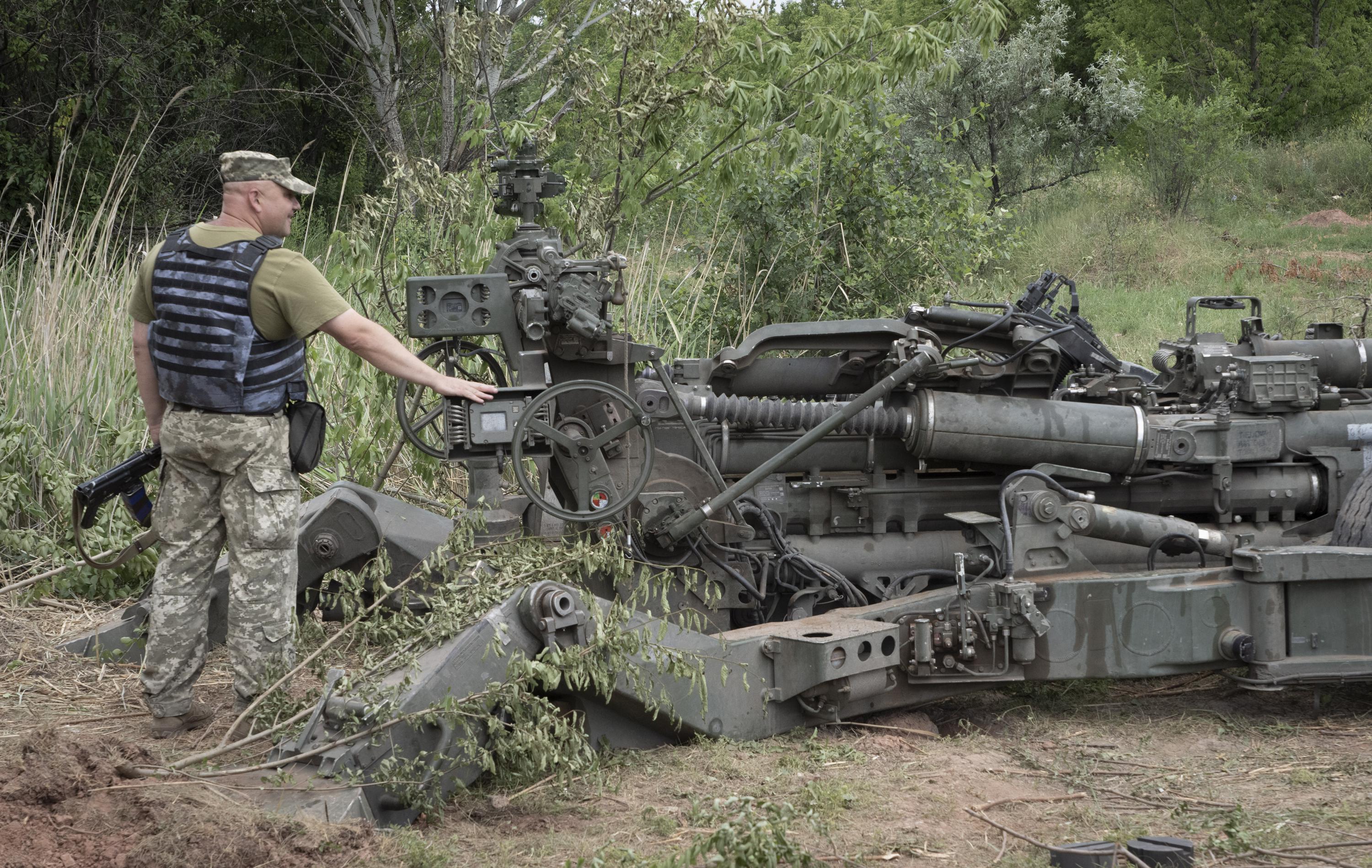 KYIV, Ukraine (AP) — The Russian military extended its grip on territory in eastern Ukraine as it seeks to cut supply lines and encircle frontline forces, while the Ukrainian military announced Thursday the arrival of powerful US multiple-launch rocket systems it hopes will offer a battlefield advantage.

Ukrainian forces withdrew from some areas near the city of Lysychansk to avoid being surrounded as Russians felt in reinforcements and concentrated their firepower in the area, Britain’s Defense Ministry said. The city is located in Luhansk province, a major battlefield in Russian President Vladimir Putin’s war against Ukraine.

Ukraine’s General Staff said Russian forces took control of the villages of Loskutivka and Rai-Oleksandrivka, and were trying to capture Syrotyne, a settlement outside the province’s administrative center, Sievierodonetsk. Luhansk Gov. Serhiy Haidai told The Associated Press that the Russians were “burning everything out” in their offensive to encircle Ukraine’s fighters.

“The Russians are advancing without trying to spare the ammunition or troops, and they aren’t running out of either,” Haidai said. “They have an edge in heavy artillery and the number of troops.”

After repeated requests to its Western allies for heavier weaponry to counter Russia’s edge in firepowerUkrainian Defense Minister Oleksii Reznikov said a response had arrived in the form of the medium-range American rocket launchers.

“Summer will be hot for Russian occupiers. And the last one for some of them,” Reznikov tweeted, thanking the US for “these powerful tools.”

The US defense official confirmed Wednesday that all four of the promised High Mobility Artillery Rocket Systems, or HIMARS, were in the hands of Ukrainian forces but said it was not clear if they have been used yet.

The US approved providing the precision-guided systems at the end of May, and once they were in the region, Ukraine’s forces needed about three weeks of training to operate them. The rockets can travel about 45 miles (70 kilometers).

The US will send an addition $450 million in military aid to Ukraine, including four more of the medium-range rocket systems, and other supplies, US officials announced Thursday.

Analysts said the advanced systems would give Ukrainian forces greater precision in hitting Russian targets. Mykola Sunhurovsky of the Razumkov Center, a Kyiv-based think tank, said the HIMARS have a longer range, more precision and higher rate of fire compared with similar Soviet-designed systems that Russia and Ukraine have used during the four-month war.

In the Luhansk region, Ukrainians remain in control of part of the territory, “defying the Russians and causing their fury and desire to burn it to the ground,” Haidai said.

For weeks, Russian forces have pummeled Sievierodonetsk with artillery and air raids, and fought the Ukrainian army house-to-house. Ukrainian forces remain holed up with about 500 civilians at the Azot chemical plant, the only part of the city still under Ukrainian control.

Haidai said the Ukrainian soldiers warded off the city’s seizure from the plant’s sprawling underground structures, but he noted that “the shelling has intensified, and even concrete shelters can’t withstand the bombardment.” The Russians were using their entire arsenal — heavy artillery, tanks and aircraft — he said.

Lysychansk, located on a steep river bank facing Sievierodonetsk, is also under a relentless Russian artillery barrage. At least one civilian died and three others were wounded in the past day as the Russians concentrated more than 100 multiple rocket launchers to “pummel entire blocks,” the governor said.

The British Defense Ministry said Russian forces had likely advanced more than 5 kilometers (3 miles) toward the southern approaches of Lysychansk since Sunday.

“Some Ukrainian units have withdrawn, probably to avoid being encircled,” the statement said. “Russia’s improved performance in this sector is likely to result from recent unit reinforcement and heavy concentration of fire.”

Ukraine’s military said the Russians were also moving to overtake the hills overlooking a highway linking Lysychansk with Bakhmut, to the southwest, in an attempt to cut the supply lines of Ukrainian forces.

Following the botched attempt to capture Kyiv, Ukraine’s capital, in the early stage of the invasion on Feb. 24, Russian forces shifted focus to the Donbas region, where the Ukrainian forces have fought Moscow-backed separatists since 2014.

The Russian military controls over 95% of Luhansk province and about half of neighboring Donetsk province, the two areas that make up the Donbas.

European Union leaders meeting in Brussels have made Ukraine a candidate for membership in the 27-nation bloc, along with Moldova, in a historic boost that binds them closer to the West than Russia.

The countries’ admission to the EU will likely take years, though. In the case of Ukraine, that’s both because of the war and the reforms the Ukrainian government must make to conform with European standards.

Serhiy Prytula credited “amazing” support among Ukrainians after his charitable foundation made the appeal for $15 million a day earlier for the purchase of the Bayraktar drones like those that Ukrainian forces have already used to defend against Russian invaders.

He tweeted: “4.6m$ to go. The People’s Bayraktar project is already a nationwide crowdfunding. Let’s turn it into international!”

British Foreign Secretary Liz Truss said Thursday that her country offered its expertise to help protect Ukraine’s ports and the safe passage of vessels for the export of Ukrainian grain.

Ukraine is one of the world’s largest exporters of wheat, corn and sunflower oil. Russia’s invasion and blockade of Ukraine’s ports have halted much of that flow and left millions of tones of grain stuck in silos, endangering food supplies to many developing countries, especially in Africa.

“It’s urgent that action is taken within the next month ahead of the new harvest, and we’re determined to work with our allies to deliver this,” Truss said at news conference with her Turkish counterpart, Mevlut Cavusoglu, during a visit to Ankara to discuss ways to end the blockade.

Turkey wants to gather the United Nations, Russia and Ukraine to organize a UN plan that would allow the safe shipment of agricultural products from Ukrainian ports. Cavusoglu said a possible deal might set up a “safe zone” just outside Ukraine’s territorial waters.

President Volodymyr Zelenskyy said Thursday that Russia has destroyed more than 2,000 schools and other educational institutions during the war.

In a video address to students and faculty at Jerusalem’s Hebrew University, Zelenskyy said that in areas where Russian troops have made quick advances, “civilians are shot, refugees are killed right on the streets, people are tortured and raped, including minors – girls and boys.’

Zelenskyy also voiced disappointment that Israel had not joined Western-led sanctions against Russia or provided Ukraine with military aid to give its forces a boost in the war.

Israel relies on good ties with Russia for security coordination in Syria, where Russia has troops and where Israel carries out frequent strikes against enemy targets. It has sent humanitarian aid to Ukraine.