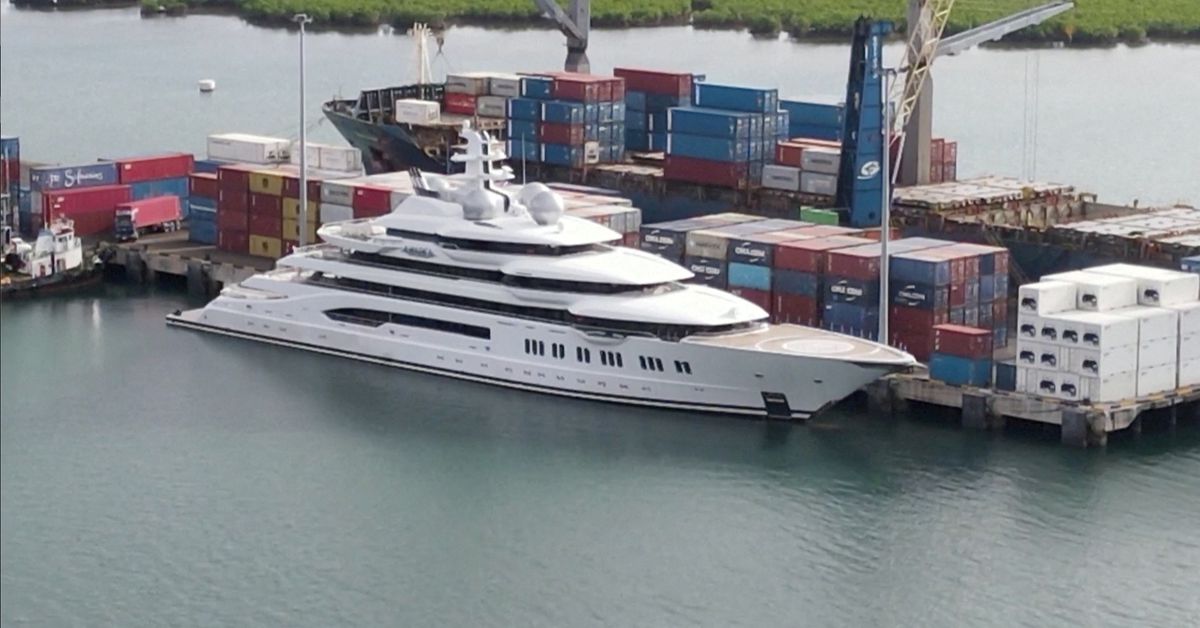 A screen grab from a drone video footage shows a Russian-owned superyacht ‘Amadea’ docked at Queens Wharf in Lautoka, Fiji May 3, 2022. Reuters TV via REUTERS

SYDNEY, June 7 (Reuters) – A Fiji court has ruled a Russian-owned superyacht be removed from the Pacific island nation by the United States because it was a waste of money for Fiji to maintain the vessel amid legal wrangling over its seizure.

The US Justice Department’s Taskforce KleptoCapture has focused on seizing yachts and other luxury assets of Russian oligarchs in a bid to pressure Russian President Vladimir Putin over the war in Ukraine.

The 106-metre(350-foot) Amadea arrived in Fiji on April 13, after an 18-day voyage from Mexico. It was seized by Fiji authorities after the country’s High Court granted a US warrant last month that linked the yacht to sanctioned Russian oligarch Suleiman Kerimov. read more

The FBI has said the $300 million luxury vessel had running costs of $25 million to $30 million per year, and the United States would pay to maintain the vessel after it was seized.

However, the Fiji government has been footing the bill while an appeal by the vessel’s registered owner, Millemarin Investments, worked its way through Fiji’s courts.

The Supreme Court ruled on Tuesday that public interest demands the yacht “sail out of Fiji waters”, because having it berthed in Fiji was “costing the Fijian Government dearly”, according to the judgment.

The vessel “sailed into Fiji waters without any permit and most likely to evade prosecution by the United States,” it added.

The United States alleges Kerimov beneficially owns the Amadea, although lawyers for the vessel have denied this and told the court it was owned by another Russian oligarch, Eduard Khudainatov, the former chief of Russian energy giant Rosneft, who has not been sanctioned.

Last month, another luxury yacht reportedly owned by Khudainatov worth some $700 million was impounded by police in Italy. read more

The FBI said in the seizure warrant the Amadea had tried to avoid being seized “almost” immediately after Russian troops entered Ukraine, turning of its automated tracking system on February 24.

The vessel’s lawyer, Feizal Haniff, declined to comment on the judgment.

He said the court agreed “issues concerning money laundering and ownership” need to be decided in the originating US court.

“The Amadea has been handed over to US authorities and will now leave Fiji,” he added.

The US embassy in Suva did not immediately respond to a request for comment.