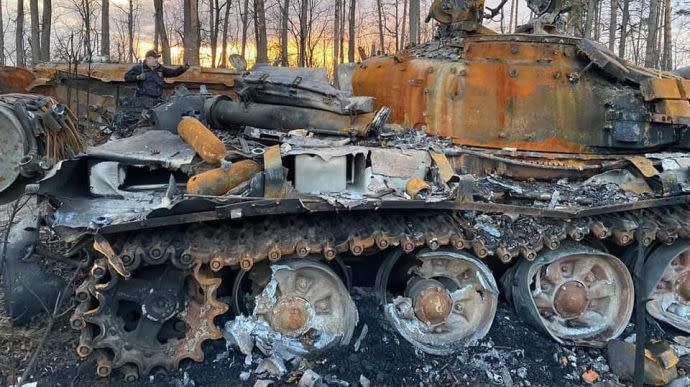 Russia will face an acute shortage of shells, artillery and armored vehicles by the end of 2022.

Quote: “Six months of war has led not only to colossal irreparable losses in manpower, but also to a huge waste of weapons and military equipment for Russia. Guided missiles are already very scarce; shells for artillery and armored vehicles will be exhausted by the end of the year; and the state of military aviation precludes a full-scale air campaign.

Because of the sanctions, Russia cannot continue full-scale industrial production of weapons and replenish its rapidly depleting stockpiles.”

Details: According to the analysis by The Insider, during six months of aggression against Ukraine, Russia had to use at least 7 million shells, not including the losses at frontline storage sites that resulted from Ukrainian strikes.

“If the intensity of the war remains at its current level, Moscow will face a tangible shell shortage by the end of 2022 and will have to reduce its use of artillery in order to save munitions,” the article says.

The author also points out the problem of wear and tear of artillery barrels. While the guides on Multiple-Launch Rocket Systems have a long service life when properly maintained, the barrels of rifled artillery guns, as well as tank guns, wear out much faster.

As the author of the article writes, by the end of 2022, the wear and tear of the artillery will lead to a drastic reduction in its effectiveness.

Thus, the expected projectile shortage should coincide with the growing shortage of artillery pieces.

At the same time, “things are not going smoothly” with the production of artillery and ammunition.

“Being cut off from supplies of Western equipment, spare parts and materials and limited in human capital and labor productivity, Russian artillery and ammunition manufacturers will inevitably face production cuts simultaneously rather than stagnation in the foreseeable future,” the article says.

The Russian Federation is also facing a growing shortage of long-range missiles. However, Russia is masking this deficit by shelling Ukrainian cities with long-range rocket artillery and by using S-300/S-400 air defense/anti-missile systems to strike ground targets.

It is unlikely that Russian industry has the potential to substantially increase rocket production, due not only to the embargo on the supply of equipment and personnel restrictions, but also to relatively low labor productivity.

The Insider also mentions a possible shortage of armored vehicles. “Even taking into account the delivery of relatively fresh, albeit not new, armored vehicles from military units and storage depots, if the high intensity of hostilities is maintained, by the end of 2022 the lion’s share of them will have to be repaired. And this is presuming they are not destroyed,” according to the article.

The aviation situation “looks better at first glance”. Today, after accounting for losses and breakdowns, Russia is still able to keep about 400 combat aircraft of various types and about 360 helicopters near the borders, although not all of them are of the attack type.

“However, it turns out that Russia has not been able to conduct a full-scale air campaign since the start of the war, and now its capacity for such a campaign has only shrunk,” the article says.

Journalists fight on their own frontline.
Support Ukrainska Pravda or become our patron.